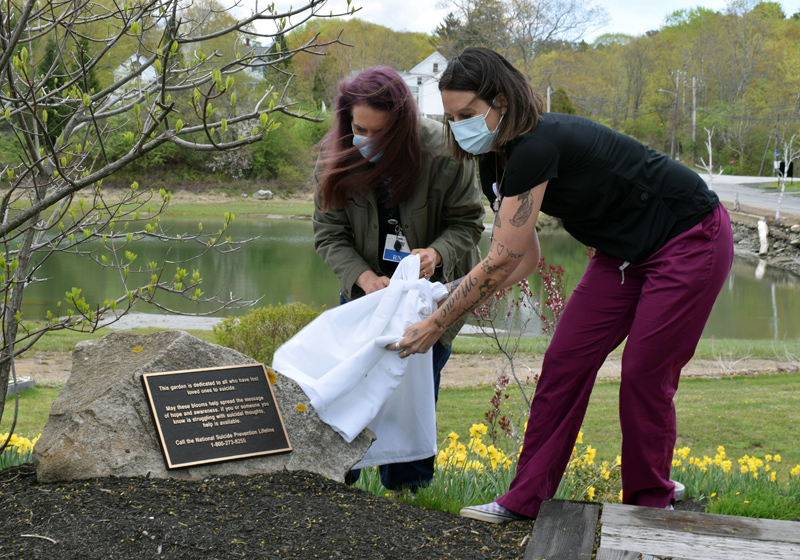 LincolnHealth employees Trudy DeLong (left) and Rebekah Oliver unveil a plaque on a stone in front of the suicide prevention awareness garden on the hospital’s Miles Campus in Damariscotta during a dedication ceremony on Monday, May 10. (Evan Houk photo)

LincolnHealth employees and project supporters gathered for a dedication of a suicide prevention awareness garden at the hospital’s Miles Campus in Damariscotta on Monday, May 10.

Stephanie Field, manager of Maine Behavioral Health’s Integration Program at LincolnHealth and other hospitals, discussed how to handle suicidal thoughts, stressing that help is available by using the National Suicide Prevention Lifeline or communicating with a primary care physician.

She said warning signs can include talking about “not wanting to be here anymore,” feelings of hopelessness, and giving away possessions.

Rebekah Oliver and Janet Peacock conceived of the idea to create a daffodil garden on the Miles Campus to “symbolize hope and bring awareness of suicide prevention,” Anderson said.

Last fall, volunteers helped to plant the yellow daffodils and tulips in the main garden in front of the emergency department and around the rest of the campus.

“For those of you who were there, it was an amazing sight to see so many people come together,” Anderson said.

Anderson said that Christopher Leeman has a personal connection to the project, as he lost his brother to suicide.

LincolnHealth employees Oliver and Trudy DeLong unveiled a plaque fixed to a stone in front of the garden, which is planted on a slope and surrounds a staircase and courtyard area.

Oliver then read the plaque’s inscription: “This garden is dedicated to all who have lost loved ones to suicide. May these blooms help spread the message of hope and awareness. If you or someone you know is struggling with suicidal thoughts, help is available. Call the National Suicide Prevention Lifeline 1-800-273-8255.”