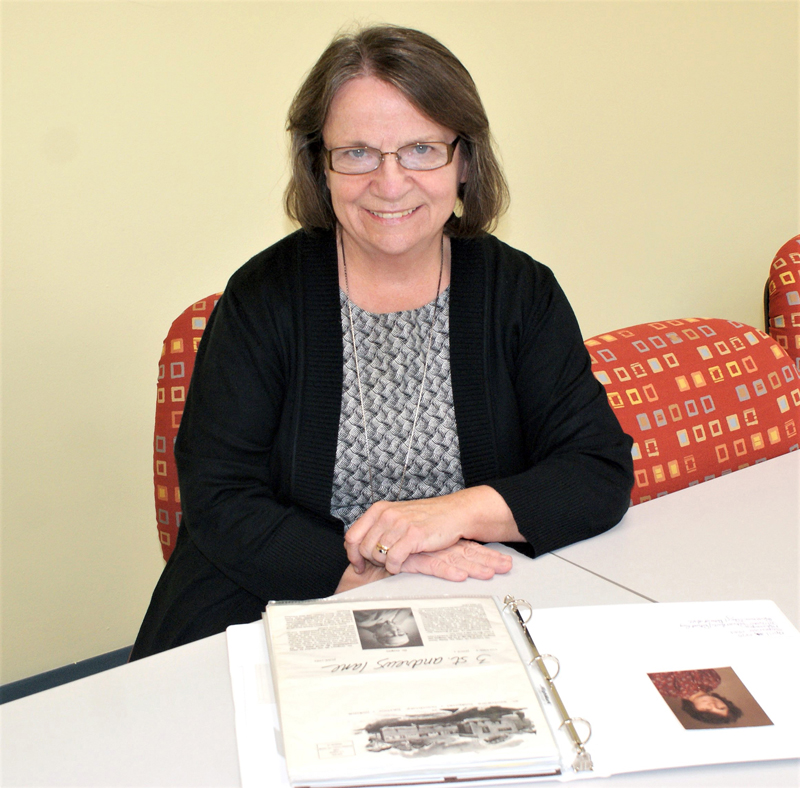 Vicky Bell is a 50-year employee of what is now LincolnHealth.

While at Boothbay Region High School, Vicky Andrews learned how to operate a Burroughs Booking Machine at a local lumberyard. Word of her skills spread to St. Andrews Hospital, which owned a similar machine, and soon she was working at the hospital during her summer vacations.

That was in 1970 and this month, Vicky (Andrews) Bell is being recognized for 50 years of employment at what is now LincolnHealth.

“When I started, everything had to have a carbon,” Bell said. “We would post every charge on an index card. When there was an audit, they used to come in and take a pallet of cards off my cart. There wasn’t a finance team or a team of accountants. We had one person who looked at our books.”

After high school, Bell was hired at St. Andrews as the accounts receivable assistant. It wasn’t long before she moved up the career ladder, eventually becoming the office supervisor in 1981.

“My team of four kept all the outpatient records, registered patients, and ran the switchboard,” she said. “Everything was still pretty manual. Billing Blue Cross involved filling out a form and stating the services rendered. There were no codes, and there would be six patients on each page.”

Bell became the business office manager in 1982. She was there when St. Andrews added home health in 1984 and a new hospital wing in 1985. She oversaw registration, admitting, and billing services when the second floor of the hospital was converted to the Gregory Wing, which offered nursing home care.

“What I enjoyed most was when we added a new service,” she said. “I was able to be a part of the planning and implementation.”

Over the course of her career, Bell helped the hospital launch three different billing systems, each one more precise in terms of coding and charges. In 2001, she became the director of patient accounts and registration when the entire billing team was in Boothbay but served Miles Memorial Hospital and St. Andrews. This was the beginning of a more unified approach between the hospitals.

Bell recalls the challenges that came when Lincoln County Healthcare was formed and the eventual change on the St. Andrews Campus that moved many hospital services to Damariscotta and led to the urgent care center opening.

“It was difficult to explain what was happening and the reasons for it, but (LincolnHealth President) Jim Donovan and (Chief Financial Officer) Wayne Printy and the other VPs did an excellent job, especially in Boothbay,” she said.

Today, Bell continues to work on the St. Andrews Campus as the director of LincolnHealth revenue integrity and customer service. She and her dedicated team work behind the scenes to investigate any problems with patient bills, missing revenue, and workflows, assuring that all charges are captured and appropriate. The team also works with departments on key issues that determine whether a service is covered or denied by insurance. When a new service is launched, the team works closely with managers to assure that billing will be correct.

“I think customer service is important in what we do. We are there for the patients when they need assistance and I enjoy that,” Bell said. “Our patients call us because they know us. We can help explain their bills, help them apply for free care, and see if there are any funds we can administer to help the people who fall through the cracks. Helping our patients is extremely rewarding.”

When looking back over 50 years, the Boothbay native and Edgecomb resident takes pride in her work to launch the billing systems, as well as the role she has played in assisting teams as new services have come along. She has also enjoyed the relationships she has built with patients and her colleagues. She appreciates the work her team does and the pride they take in doing it.

“I’m a people person, and I enjoy the people I work with. I miss going to the Miles Campus and seeing the people there,” she said. “We have great people and a great team that cares for each other and our patients, and I still enjoy coming to work every day.”

LincolnHealth President Jim Donovan said Bell’s commitment to the community and her work has left a lasting impact.

“Very few people in any industry stay with an organization for 50 years,” said Donovan. “To put things in context, when Vicky came here in high school, Lincoln County’s population was 44% lower than it is today, gas cost a whopping 36 cents a gallon, and women would stay in the hospital for at least four days after having a baby.”

“Vicky has served in many important roles over the years and has always been reliable and patient-centered,” he said. “We’ve been lucky to have her choose to spend her entire career with us, and we’re glad she plans to stay on for many more years.”