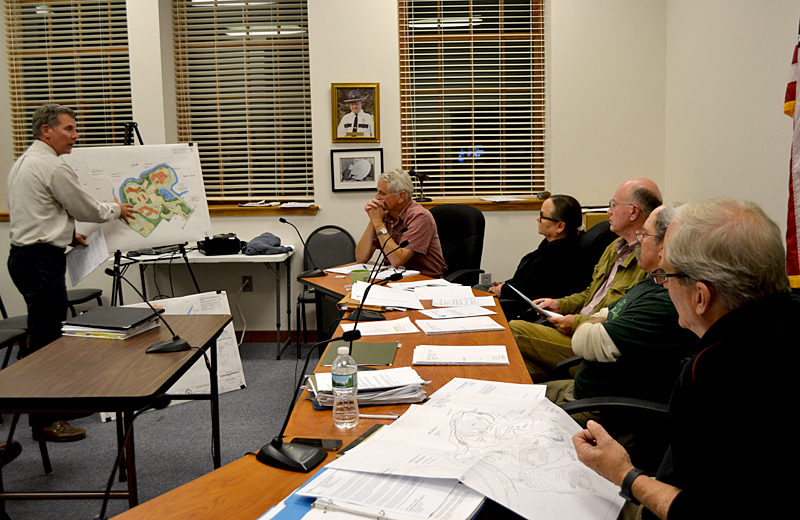 Peter Biegel, a landscape architect with Land Design Solutions, presents the plan for LincolnHealth’s outpatient health center to the Damariscotta Planning Board and Town Planner Tony Dater on Monday, Oct. 3. LincolnHealth plans to build the 2 1/2-story building between between the hospital and Schooner Cove. (Maia Zewert photo)

The Damariscotta Planning Board got a look at LincolnHealth’s proposed $13 million outpatient health center for the Miles Campus on Monday, Oct. 3.

The new outpatient health center will consolidate many of the physicians on the Miles Campus into one building between the hospital and Schooner Cove, an independent living facility.

The facility has been a topic of discussion dating back to 2010, and is part of a master facility plan, according to LincolnHealth Vice President of Marketing, Development, and Community Relations Scott Shott.

LincolnHealth originally explored the possibility of constructing the facility in 2015 with a feasibility study to gauge public interest and support for the project. The hospital received a very good response in the study, Shott said.

Charles Rizza Jr., the architect on the project and the director at MorrisSwitzer Environments for Health, and Peter Biegel, a landscape architect with Land Design Solutions, presented the planning board with an overview of LincolnHealth’s proposal on Oct. 3.

The 2 1/2-story building will have a footprint of 16,560 square feet and consolidate a number of physicians’ practices currently spread throughout the Miles Campus, including the Dorothy B. White Orthopaedics Center, once a carriage house and later a nurses dormitory; the Miles Professional Building, formerly a private residence; and the Webster Van Winkle Medical Building, Biegel said.

LincolnHealth plans to build the center on the site of the Maine Behavioral Healthcare building, formerly the women’s center, and its parking lot, Biegel said.

Discussions are ongoing as to how the vacant buildings might be repurposed once physicians move into the new building, Biegel said. LincolnHealth officials previously said the Miles Professional Building would be removed.

The location of the building would allow Schooner Cove residents to walk directly to their physicians’ offices, Biegel said. In addition, physicians would have the convenience of being closer to the hospital.

“The convenience of the connectivity is very important,” Biegel said.

The upper two stories will be used for physicians’ offices and waiting rooms, Rizza said. The lower level, which would be partially tucked into a hillside, would consist of a community room of approximately 1,000 square feet. The community room would be the largest gathering room on campus and would be available for staff meetings as well as community gatherings.

An outdoor patio would be attached to the community room, Rizza said. No additional parking is proposed.

Both Biegel and Rizza said the project has been discussed with the residents of Schooner Cove, which neighbors the site. Some of the concerns expressed by Schooner Cove residents included noise and landscaping.

A room to house mechanical operations for the new building has been moved in the design to the side of the building furthest from Schooner Cove in an effort to limit noise, Rizza said. In addition, the locations of an elevator and a stairway were switched to prevent light pollution from the security lights in the stairway from affecting residents.

“We are trying to be as sensitive as possible to the residents at Schooner Cove,” Rizza said. “We asked them to sit on our planning committees so if they have any concerns, they can raise them.”

A capital campaign to raise the funds needed for the project is currently underway. Shott said the campaign is currently in the “quiet phase” and the hospital is having discussions with potential major donors.

The hospital has $9 million saved for the project, Shott said. The capital campaign is for $4 million.

“One of the things I’m really proud about is that we are not borrowing any money to build this,” Shott said.

The outpatient health care facility is possibly the most important project Shott has been involved with during his tenure at the hospital, he said.

“We are preparing for the future, and the future of health care is outpatient care,” Shott said.

The planning board voted unanimously that LincolnHealth will not need to include a boundary survey or the right, title, and interest for the property in its formal application.

LincolnHealth officials will make a presentation about the facility to the Damariscotta Board of Selectmen during the board’s meeting Wednesday, Oct. 5. The meeting will begin at 5:30 p.m. in the Damariscotta town office.