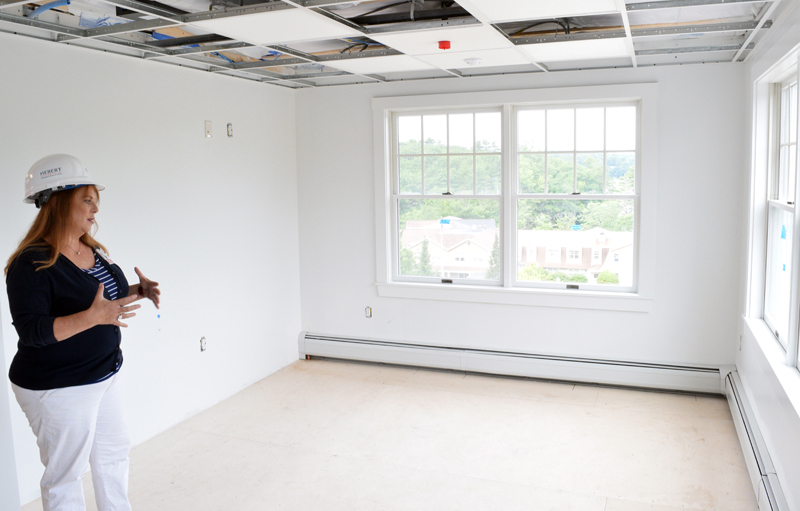 Kelly Creamer, director of wellness and rehabilitation services for LincolnHealth, discusses the “bright and open” atmosphere of the renovations underway at the Webster Van Winkle building on the hospital’s Miles Campus in Damariscotta. The renovations and the addition of a new 3,300-square-foot physical and occupational therapy center will allow more room for both LincolnHealth employees and patients, as well as increased privacy, more parking, and more access to therapy and exercise machines, Creamer said. (Evan Houk photo)

The Webster Van Winkle building on LincolnHealth’s Miles Campus in Damariscotta is getting a facelift and will soon house the hospital’s wellness and rehabilitation services.

For the past 30 years, all wellness and rehabilitation services — which include physical therapy, occupational therapy, speech and language therapy, and special services for nutrition, diabetes, and lymphedema — have been housed on the third floor of the main hospital building, Kelly Creamer, director of wellness and rehabilitation services, said during a tour of the construction site at the Van Winkle building.

The renovations and the addition of a new 3,300-square-foot physical and occupational therapy center will allow more room for LincolnHealth employees and patients, as well as increased privacy, more parking, and more access to therapy and exercise machines, Creamer said. She expects the wellness and rehabilitation department to be fully moved into the new space by next February.

“It’s going to be so much better for our team, for our workforce, and our patients. They’re going to be able to do much more,” LincolnHealth spokesperson John Martins said.

Compared to the approximately 6,000-square-foot third floor space in the hospital, the Van Winkle building, when renovations are finished, will be about 15,000 square feet, according to Martins. 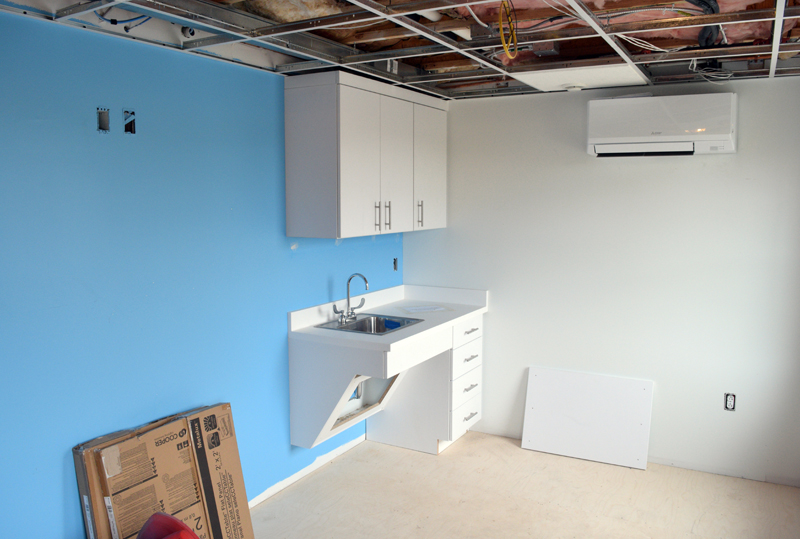 One of the exam rooms in the Webster Van Winkle building on LincolnHealth’s Miles Campus in Damariscotta during renovations. The hospitals wellness and rehabilitation services plan to move into the space by February. (Evan Houk photo)

“We pretty much gutted it, we moved walls around, we made doors bigger to make it more accessible,” Daniel Bouffard, construction supervisor with Lewiston-based Hebert Construction, said of the renovations in the three-floor former residence.

The Van Winkle building sits on a hill overlooking Chase Point Assisted Living Facility and has a view of the Damariscotta River that can be seen from the physical and occupational therapy, or exercise, space.

The addition on the ground floor of the building is essentially a large open exercise room that will include treadmills, ellipticals, a leg press, functional trainers, or all-in-one gym set-ups, parallel bars, a resistance band system, and stationary bicycles, Creamer said.

The center will also include an overhead lift for helping patients who can’t move well on their own undergo therapy and an ambulation track to help patients, particularly those with neurological disorders, walk, she said.

“This just gives us the ability to really challenge somebody and provide the level of technical care that we really need to be able to provide,” Creamer said.

The new space will allow the wellness and rehabilitation department to better serve these different types of patients as well as athletes, Creamer said. The larger space will allow athletes room to run, throw a ball, or practice sports.

The first floor, where patients enter, includes four check-in counters, private exam rooms, a conference room, and the speech and nutrition departments. This will allow speech therapists and dietitians “to collaborate on a care plan for the patient” working close together, Creamer said.

The second and top floor houses the occupational therapy department, where hand, elbow, wrist, shoulder, and lymphedema therapies will take place. There is a mini exercise space for patients to work their extremities. 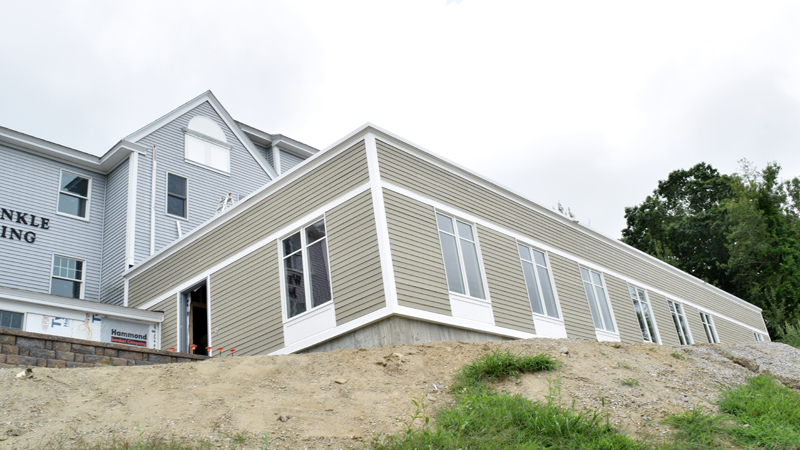 A view of the exterior of the new 3,300-square-foot addition to the Webster Van Winkle building that will serve as a physical and occupational therapy and exercise center at LincolnHealth’s Miles Campus in Damariscotta. (Evan Houk photo)

“People with visual challenges or balance challenges can touch the screen with all the dots moving and really try to get to work on that visual scanning,” Creamer said.

Also on the second floor is an “activities for daily living” room where patients with a stroke or head injury can practice navigating the home environment during their recovery.

“That’s the (occupational therapy) specialty is really teaching people how to be safe and function independently with where they are in the present moment,” Creamer said.

The importance of telehealth was highlighted by the COVID-19 pandemic and led to designated spaces for therapists to perform that service being included in the Van Winkle renovations.

“This also provides us with an opportunity for growth. So, as we continue to grow, we can have a new vision for utilization of these spaces if we need to,” Creamer said.

The expansion will allow the department to hire two new therapists, for a total of nine, who will each be able to see about 10 patients per day, Creamer said. 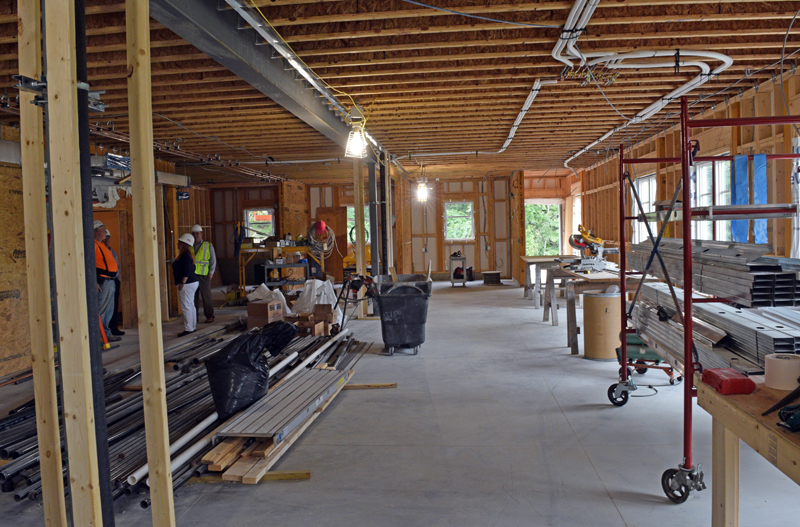 A view of the new 3,300-square-foot addition to the Webster Van Winkle building on LincolnHealth’s Miles Campus in Damariscotta that will serve as a physical and occupational therapy center and exercise space. The hospital’s wellness and rehabilitation services are moving into the building in February from the third floor of the hospital, more than doubling the space available for the department. (Evan Houk photo)

The whole building has been outfitted with heat pumps, a new, more efficient boiler, and LED lighting throughout, according to Bouffard.

The current wellness and rehabilitation center on the third floor of the hospital was expanded in the late 1990s, but the department has simply outgrown the space, Creamer said.

There are currently no solid plans for what to do with the space once wellness and rehabilitation have relocated to the Van Winkle building, but the expansion of infusion and oncology services is a possibility, Martins said.

Prior to the opening of the Herbert and Roberta Watson Health Center in August 2018, the Webster Van Winkle building had hosted the Lincoln Medical Partners primary care offices and some visiting specialty services, Martins said. When COVID-19 arrived in March 2020, the building served as a drive-up testing site.

“I think we’re definitely prepared for whatever this world has in store for us in the next 20 years,” Creamer said of the new space at the Webster Van Winkle building.