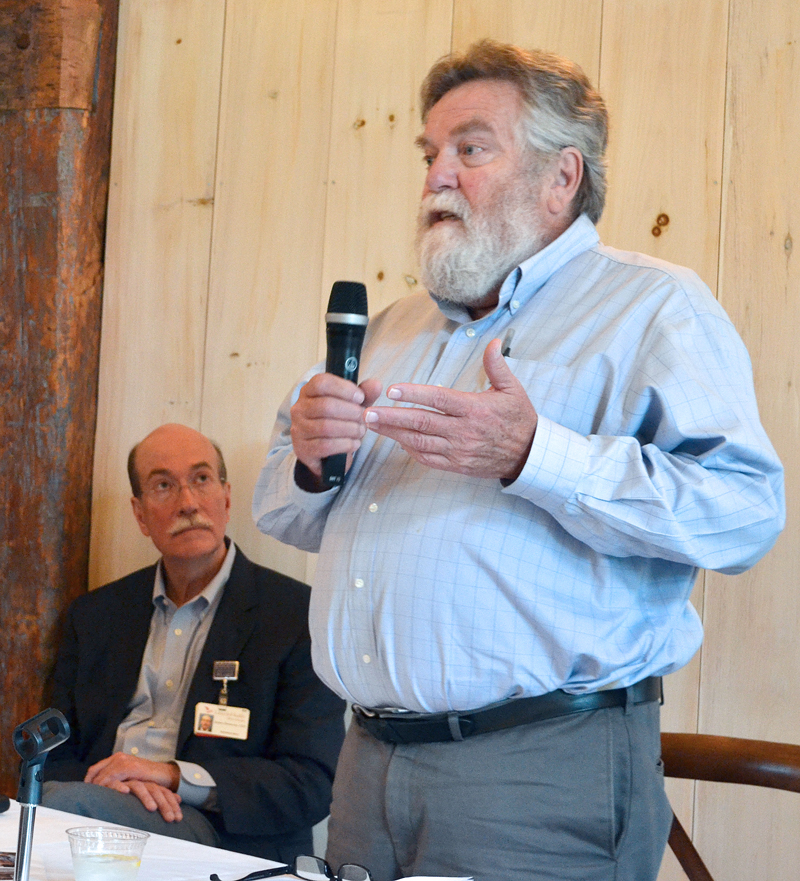 Area residents expressed concern about the loss of local control over LincolnHealth that would result from the unification of the MaineHealth system during a public meeting at The 1812 Farm in Bristol Mills on Wednesday, July 12.

Since last fall, the LincolnHealth Board of Trustees, along with the boards of organizations throughout the MaineHealth system, have been discussing the possibility of reorganizing to create a single, system-wide board and a unified financial structure.

MaineHealth and LincolnHealth are hosting public meetings to inform the community about those discussions, as well as the opportunities and the challenges unification could bring, according to LincolnHealth Board of Trustees Chair Bill Logan.

A second meeting will take place at the Congregational Church of Boothbay Harbor at 4 p.m., Wednesday, July 26.

The panelists answered questions from Nesbit about the financial resources and services unification could provide to LincolnHealth, as well as the challenges and changes that could come with unification. The panel fielded questions from those in attendance for the final 45 minutes of the two-hour meeting.

Logan shared some of the history of MaineHealth’s relationship with Lincoln County. St. Andrews Hospital, of Boothbay Harbor, and Miles Memorial Hospital, of Damariscotta, were the first community hospitals to join MaineHealth in 1996 and 1997, respectively.

In 2013, the two hospitals merged to form a single critical-access hospital, which was renamed LincolnHealth. MaineHealth continued to own LincolnHealth.

While MaineHealth owns 10 organizations, each operates independently, has its own budget, and covers the costs of providing services within its own community, Logan said. However, MaineHealth has oversight over member organizations, and must approve annual budgets, appointments of board members and the CEO, and strategic plans.

“It’s more intertwined than one might think,” Logan said. “In some ways it’s hard to say we aren’t unified already, but we aren’t.”

When representatives from MaineHealth and Maine Medical Center, of Portland, visited the local hospital boards in October to present the idea of unification, the LincolnHealth trustees were surprised, Logan said. A governance study conducted three years prior and the strategic plans of both MaineHealth and LincolnHealth had reaffirmed the “freestanding model” currently in place.

Aware of the pushback the proposal could receive, the LincolnHealth board researched the impacts unification would have on the financial, medical, and nursing sectors within the hospital and developed a list of benefits and risks of reorganization.

Unification would enable MaineHealth to move financial resources around the system without having to review each organization’s governing documents, Logan said. Unification could provide necessary assistance for hospitals that are losing money. 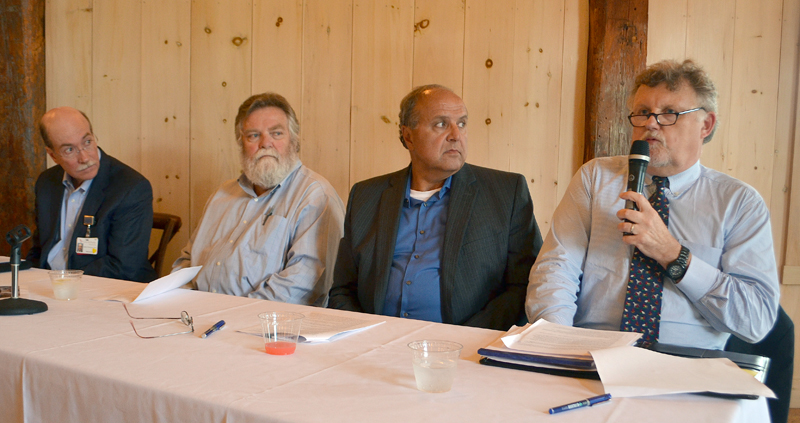 Much of the revenue that used to sustain LincolnHealth is shifting to either major medical centers or less costly outpatient practices, Donovan said. At the same time, approximately two-thirds of LincolnHealth’s business comes from MaineCare and Medicare patients. Neither program covers the full cost of delivering care.

While LincolnHealth did make a small profit last year, Donovan said he “certainly doesn’t see that getting any better moving forward.”

“We’re like the little engine that could, but it’s getting more and more challenging to make ends meet,” Donovan said.

Dick McLean, of Damariscotta, asked if the unification would cause the state to reimburse the system differently than it would if each organization was operating independently.

The panel did not say whether the reorganization would cause a change in reimbursement, but Caron said cuts to reimbursement will likely continue regardless of the system’s structure. The unification could reduce the impact on smaller communities that could be hit the hardest, he said.

Contributing to the challenges is the current debate surrounding health care in the U.S. Senate, Donovan said.

“No matter what comes out of the Senate, I can guarantee we’re not going to like it. It’s going to bring more challenges to us,” Donovan said.

The unification could also help rural hospitals recruit professionals. It is sometimes difficult to attract physicians to rural areas, and becoming part of a larger medical system could make LincolnHealth a more desirable place to work, Logan said. 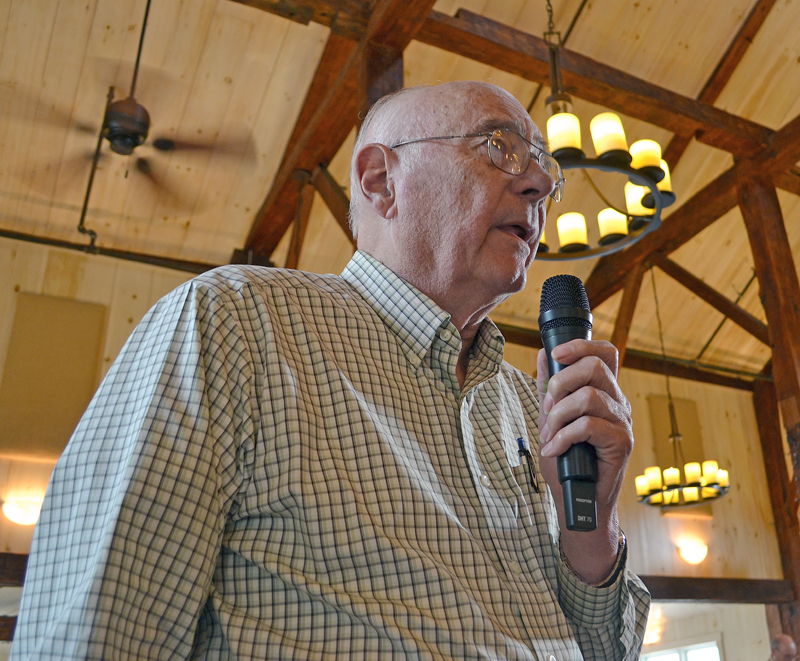 The clinical and financial resources of the larger organization could ensure the stability of local services, essentially providing risk management, Mack said.

One of the biggest risks of unification is the loss of local control, Logan said.

For the first five years after unification, each organization would have representation on the new, system-wide governing board, Caron said. After five years, a committee would nominate a smaller board.

Each organization would continue to have a local governing board that would oversee credentialing providers, ensuring care delivery and quality, and providing input on the hiring and evaluation of executives.

In addition, the local governing boards would oversee development and fundraising specific to their own communities, Donovan said.

Unification could result in a loss of support for local innovation and a loss in accountability and local pressure to resolve matters, Logan said.

“It’s easier to talk to your next-door neighbor about your concerns than someone who’s farther away from home,” Logan said. “Our concern is, how can people feel they have a voice and they have a way to get their words to the people making the decisions?”

Another risk involves standardization of practices across the MaineHealth system, which could create a “one-size-fits-all” approach to health care, Logan said.

As a patient of LincolnHealth, Bristol resident Doug Cameron said he “couldn’t say enough” about the care he has received at the Miles Campus.

“We need you here,” Cameron said. 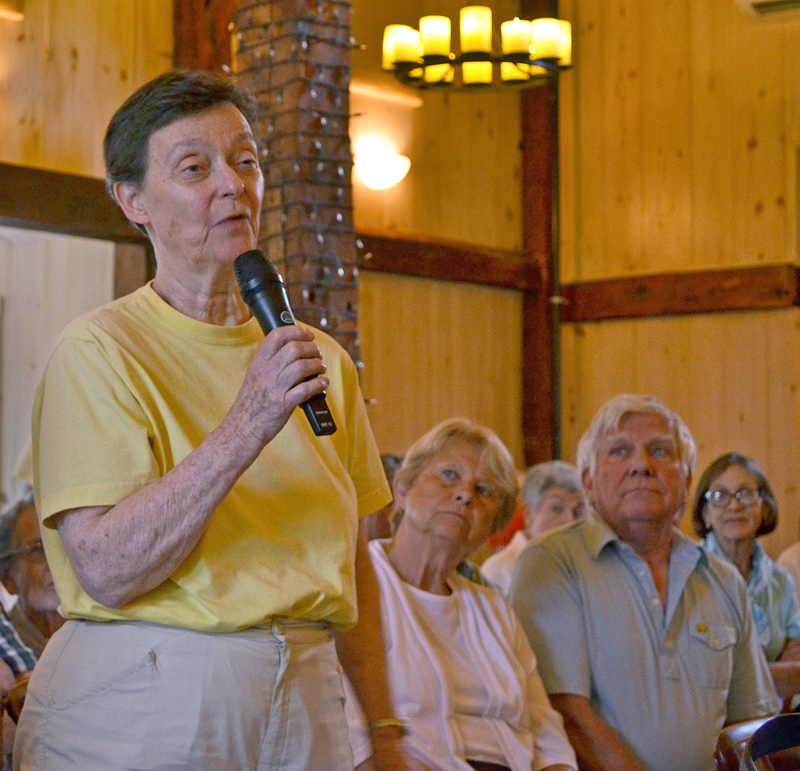 Meradith Hill talks about the care she and her husband, Bill Hill, have received at LincolnHealth’s Miles Campus in Damariscotta during a public forum about the MaineHealth unification proposal Wednesday, July 12. (Maia Zewert photo)

Meradith Hill, of Nobleboro, echoed Cameron’s statement. She said she and her husband, Bill Hill, appreciate that they do not have to go to New York or Boston to receive care; they just need to drive 10 miles to the Miles Campus.

One thing the hospital could do to improve, however, is to reduce redundancies in personnel, Cameron said. He did not give a specific example.

Bristol resident and former LincolnHealth board member Norman Hochgraf asked whether the board considered alternatives to unification before bringing the idea to the community, and Logan said it had.

Hochgraf said the “preservation of the sense of localness” is a key factor that needs to be considered when discussing unification.

“It’s hard to evaluate the loss of local control. I think it’s more about losing a sense of community,” Hochgraf said.

Over the past two decades, LincolnHealth has maintained “a pretty darn positive” track record with the local community, Donovan said, and that will continue if the unification moves forward. Donovan said the new outpatient health center on the Miles Campus “is a $14 million commitment we’re here to stay.”

At the close of the two-hour forum, Donovan thanked everyone for their comments and questions and said anyone is welcome to contact him for more information.

“This is a complicated, complex, ongoing discussion with a lot of work to do,” Donovan said. “It’s very important to hear your thoughts, concerns, and perspectives.”

For more information about MaineHealth’s unification initiative, go to mainehealth.org/about/unification.