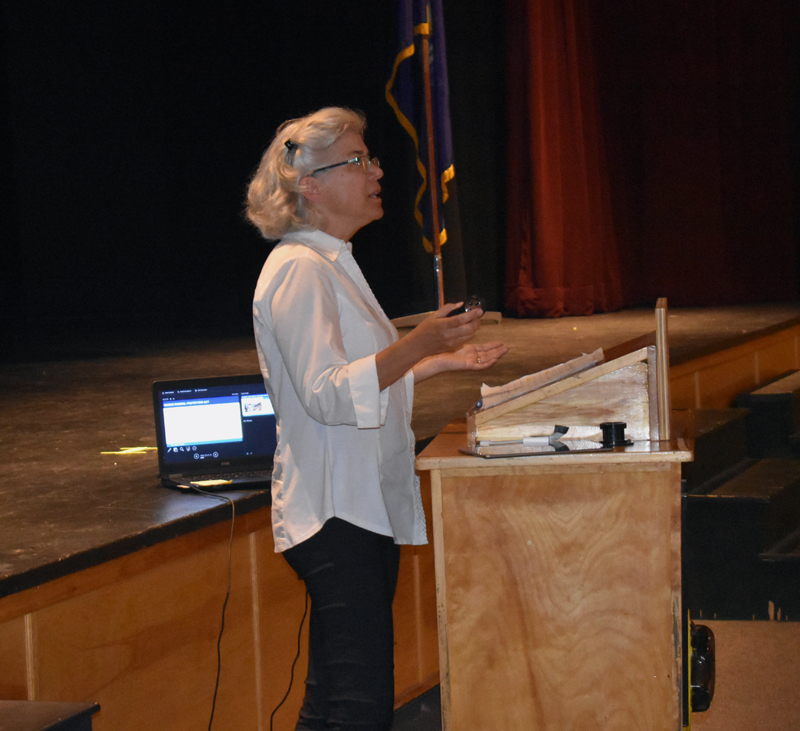 Local lobstermen and state legislators are resisting an effort to impose new restrictions on lobster gear in an effort to protect right whales, saying the regulations would have negative financial and safety impacts on lobstermen without any benefit to the whales.

The National Oceanic and Atmospheric Administration hosted a meeting about the pending regulations at Medomak Valley High School in Waldoboro on Wednesday, Aug. 14. The “scoping” meeting was one of four in Maine and eight on the East Coast.

The population of North Atlantic right whales in the wild is down to about 400. The whale is one of the world’s most endangered large whale species, according to Michael Asaro, marine mammal and sea turtle group lead with NOAA’s Greater Atlantic Regional Fisheries Office.

Federal officials are seeking feedback on regulations to protect the whales, specifically about how gear changes would impact lobstermen.

New regulations could remove hundreds of buoy lines off the state’s coast, affect the number of traps per trawl, and expand gear-marking requirements.

Those proposals met with vocal opposition and questions from the fishing community about whether science supports the need for the regulations.

Bob Baines, a lobsterman from South Thomaston, described the regulatory approach as impractical and not cost-effective.

“Where is the common sense in this process? There doesn’t appear to be any,” Baines said.

Jeremy Willey, a lobsterman from Owls Head, talked about safety, raising specific concern about a proposal to have 40-pot trawls. 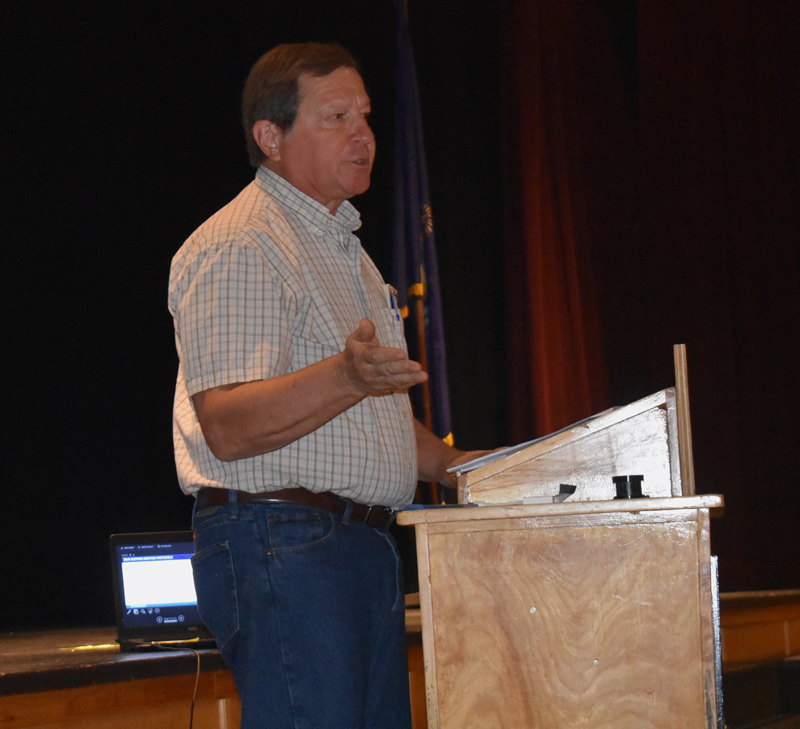 He also expressed opposition to proposals for “ropeless” traps.

“The ropeless idea is absurd. We would need to know where everybody’s trap was and no one wants to spend money on a computer for that,” he said.

After a presentation by NOAA, indicating that lobstermen may have to remove as much as half of their rope from the water in an effort to protect the whales from potentially deadly entanglements, the first comments came from Maine Department of Marine Resources Commissioner Patrick Keliher.

Keliher was blunt in his assessment.

“This has the potential to dramatically impact the state and the industry,” he said.

Keliher said Maine fishermen have been icons of conservation for decades and are being unfairly targeted by the regulations, specifically the amount of rope they may have to remove from their fishing grounds.

“Maine fishermen have actively participated in the conservation of marine mammals for the last 20 years,” Keliher said.

The Canadian snow crab industry was mentioned as a potential source of deadly entanglements. 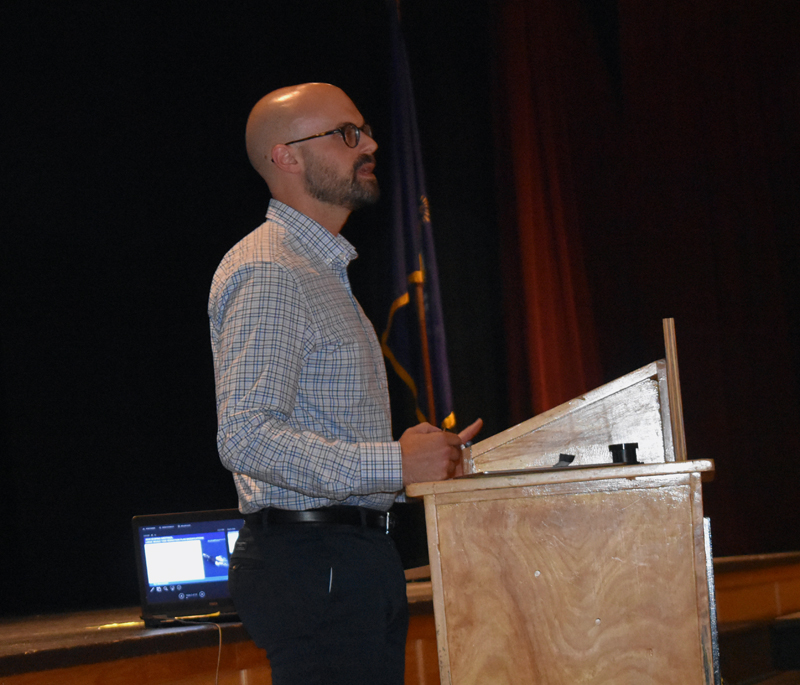 According to Keliher, 20 right whales have been found dead north of the border – none in Maine. He said eight whales died due to entanglement this summer.

“The sharp increase in Canadian mortality needs to be considered by NOAA. Further regulations on the Maine lobster industry will not improve the Canadian numbers,” Keliher said.

Other industry representatives agreed that the Maine lobster fishery is not responsible for the declining population of right whales.

“We’re going to create hardship if these rules go in as written,” said Gary Libby, of Port Clyde Fresh Catch.

McCarron attributed the decline of the species to environmental conditions, such as the warming of the Gulf of Maine and surrounding portions of the North Atlantic, prompting the whales to spend more time in Canadian waters.

“A complete shutdown of the Maine fishery wouldn’t have prevented a single death in Canada,” McCarron said. 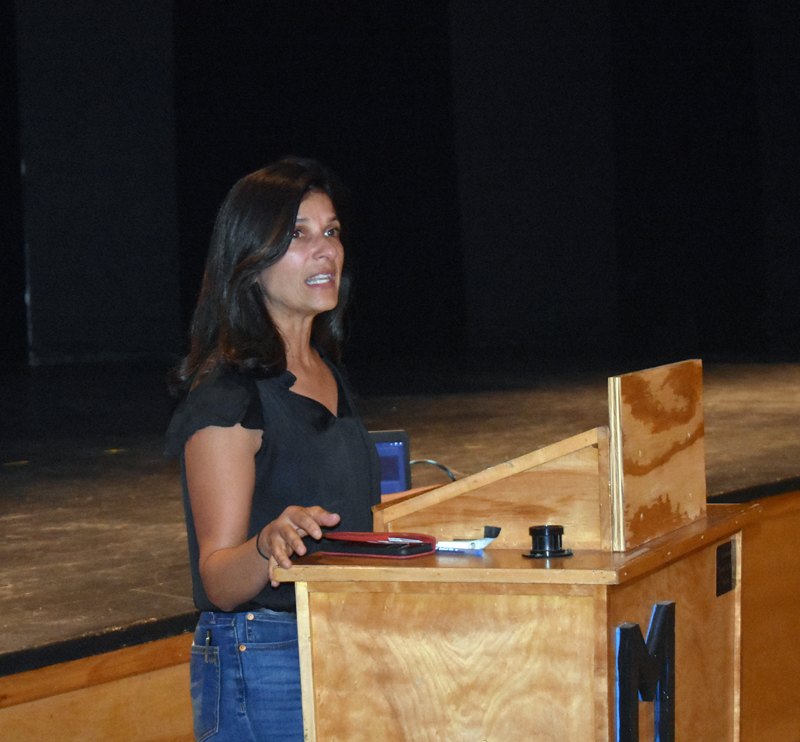 U.S. Senate candidate Sara Gideon, of Freeport, speaks in support of the lobster industry during a meeting at Medomak Valley High School in Waldoboro on Wednesday, Aug. 14. (Alexander Violo photo)

McCarron said right whales are more at risk from collisions with ships than entanglements.

“More right whales are struck than entangled in the U.S.,” McCarron said.

McCarron advocated for a rational approach from federal regulators.

“We should develop priorities that address more pressing issues to the species,” McCarron said.

State Rep. Jeffrey Evangelos, I-Friendship, spoke at length about resistance to any regulations that unduly harm the lobster industry.

He said he met with Friendship lobstermen in July, who strongly oppose the regulations, and urged the public to contact their representatives at the federal and state levels.

“I want you to know we are here to help you and support you and we will do everything we can to protect you,” Evangelos said.

Maine Speaker of the House Sara Gideon, D-Freeport, a candidate for U.S. Senate, said that while there is consensus that the right whale is in danger, there is no consensus that it is due to the actions of the state’s lobster industry.

Gideon said lobstermen have adopted steps to protect whales, such as using sinking rope, and called for management proposals based on science. 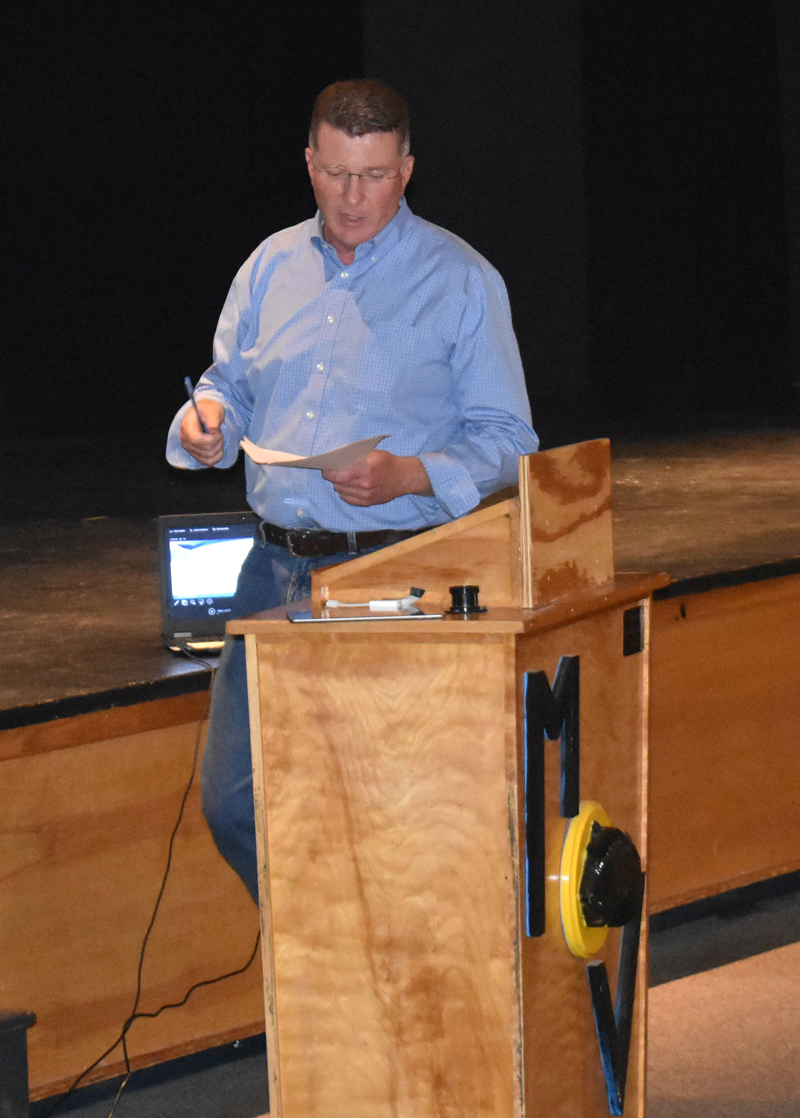 “It seems the science we have does not have actual evidence of lobster gear entangling right whales,” Gideon said.

Gideon said she wanted to go on the record as opposing rules that do not have science to back them up.

“I want to reiterate the dire consequences for the lobster industry and Maine,” she said.

Right whales are listed as endangered under the Endangered Species Act and are considered depleted under the Marine Mammal Protection Act.

Asaro, of NOAA, said the population of right whales has declined since 2010, with a majority of the existing population facing the risk of entanglement on a regular basis.

He said 85% of right whales have been entangled at least once.

Asaro pointed to the decline in female right whales as a troubling trend.

“There are fewer than 100 females of reproductive age. That is a relatively low number of females to sustain and grow a population,” he said.

Additionally, Asaro said the population has a low birth rate.

“The last few calving seasons there have only been 12 calves produced. We would hope for around 25 calves per season,” he said.

Asaro said these factors are not results of entanglements, but of climate change, as the ocean temperature in the Gulf of Maine is rising at an alarming rate.

Take Reduction Team Coordinator Colleen Coogan, a NOAA scientist, said federal law requires that the risk of harm to right whales be drastically reduced to less than one human-caused whale death per year.

NOAA’s National Marine Fisheries Service intends to expand large whale conservation efforts and the purpose of the scoping sessions is to involve the public in developing ideas to reduce the risk of serious injury or death of large whales that interact with buoy lines from commercial trap/pot and gillnet fishing gear, according to a NOAA document.

The geographic scope of the take reduction team’s recommendations are focused on New England waters and primarily trap/pot fisheries, with an understanding that the Mid-Atlantic and gillnets will considered in the future.

The scoping sessions have been held in anticipation of the preparation of a draft environmental impact statement for modifications to the Atlantic Large Whale Take Reduction Plan.

Regulations are scheduled to be ready by January 2020 and implemented in 2021.