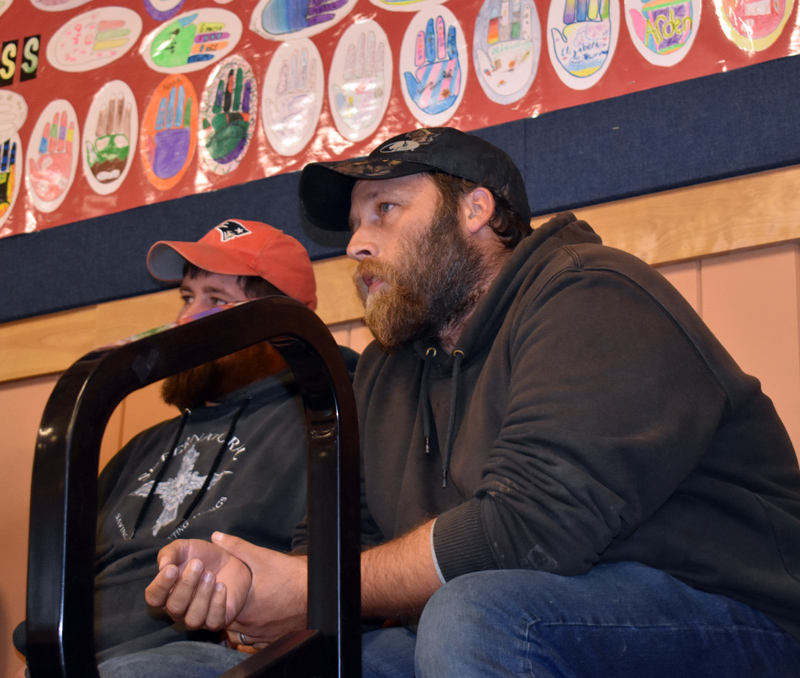 Jason Harvey, of Waldoboro, asks a question about potential new regulations on the lobster industry during a meeting at Medomak Middle School in Waldoboro on Tuesday, Nov. 5. (Alexander Violo photo)

Lobstermen expressed a mix of frustration and acceptance upon hearing the state’s new plan to protect North American right whales during a meeting in Waldoboro on Tuesday, Nov. 5.

The DMR’s proposal aims to protect endangered right whales in response to federal requirements, triggered by the Endangered Species Act, to reduce death and injury to whales from entanglements in buoy lines.

The DMR’s proposal is less restrictive and calls for the removal of less fishing gear than a previous federal proposal and strives to reduce the economic impact on the fishery.

Keliher spoke about the legal power of the federal Endangered Species Act and the track record of federal justices.

“I want everyone to go into this eyes wide open,” Keliher said.

Right whales are listed as endangered under the Endangered Species Act and are considered depleted under the Marine Mammal Protection Act.

Keliher used the far-reaching impact of efforts to revive Atlantic salmon populations in the state as an example of the practical applications of the 1970s law. 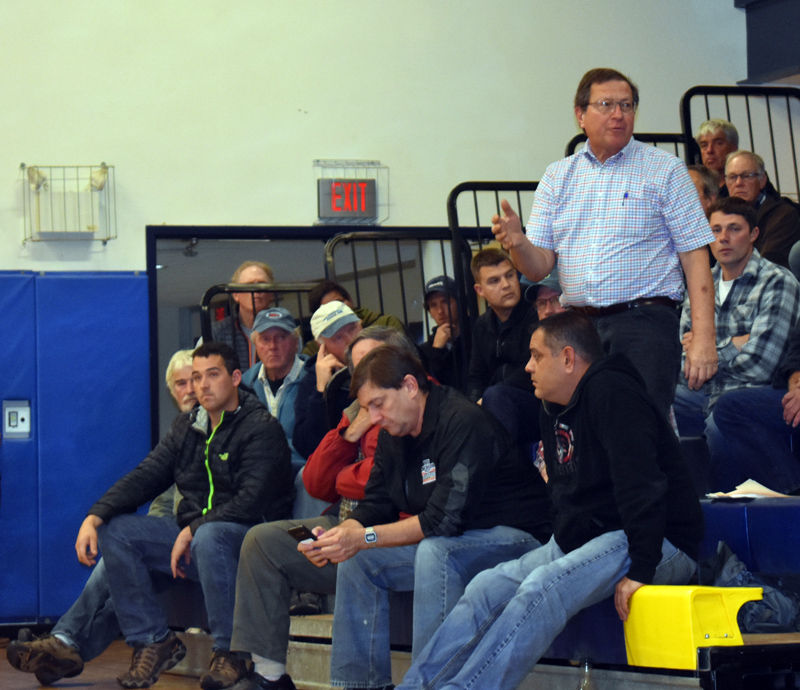 “The word extinction is a very powerful word. The federal government is not going to just give up on a species,” Keliher said.

The Waldoboro meeting was one of three held this week to present the proposal to lobstermen. The others were in Ellsworth, on Monday, Nov. 4, and South Portland, Wednesday, Nov. 6.

The proposal will go to regulatory authorities for review as the state attempts to meet federal requirements to reduce the risk of buoy line entanglements to right whales.

In August, lobstermen pushed back on pending regulations during a National Oceanic and Atmospheric Administration hearing at Medomak Valley High School in Waldoboro. 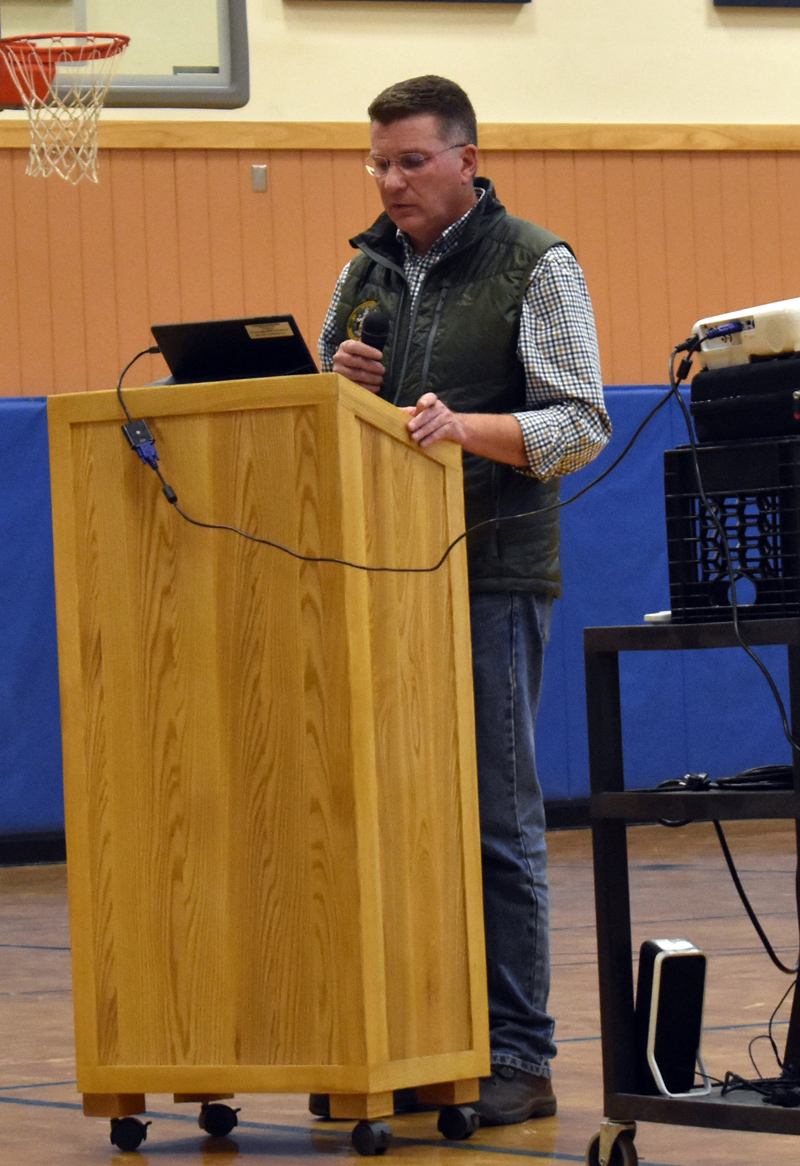 While several lobstermen continued to express opposition to regulations, questioning whether their industry impacts right whales, some spoke in favor of the DMR’s efforts. Those lobstermen called the new proposal much improved from the regulations discussed this summer, when lobstermen were facing the removal of as much as half of their rope from the water.

Jason Harvey, of Waldoboro, spoke after the meeting about giving away too much at this stage of the regulatory process.

“I agree with some of the other guys. I think we are offering up too much. We’re giving away the whole turkey. I think we can try something a little lighter and see if (regulators) will be satisfied,” Harvey said.

During the meeting, Harvey asked about vertical line reduction and the need for hard data on the number of end lines in the Gulf of Maine in lieu of the extrapolations being used now.

“We need to find out what the fishery actually has so we aren’t going beyond what is necessary to satisfy the risk,” Harvey said.

According to Keliher, a survey on the total amount of end line was done in 2017.

Harvey asked about the potential for the regulations under discussion now to be rolled back at a later date.

“Fishery management isn’t good about going backwards. If we put this on the table now, I don’t know how we will go back,” Keliher said.

The new plan did receive support from some fishermen in attendance, including Dave Cousins, a former president of the Maine Lobstermen’s Association.

“The ‘Hell no we’re not going to go’ crowds (are) not going to carry the day … If you want New England fisheries or a judge to make a decision, then just do nothing, because they will make it for you,” Cousins said.

The new proposal from Maine fishery officials calls for the removal of a quarter of all line, short of a June proposal to remove half of the line.

The proposal would not impact the majority of the fleet – those who fish within 3 miles of shore.

Other portions of the department’s proposal include potential increases in the number of traps fished per line and decreases in the total number of traps used by lobstermen, in addition to using rope the whales can break free from if entangled, reporting where and how they fish, and using purple gear so it can be identified as Maine gear if found on a right whale. 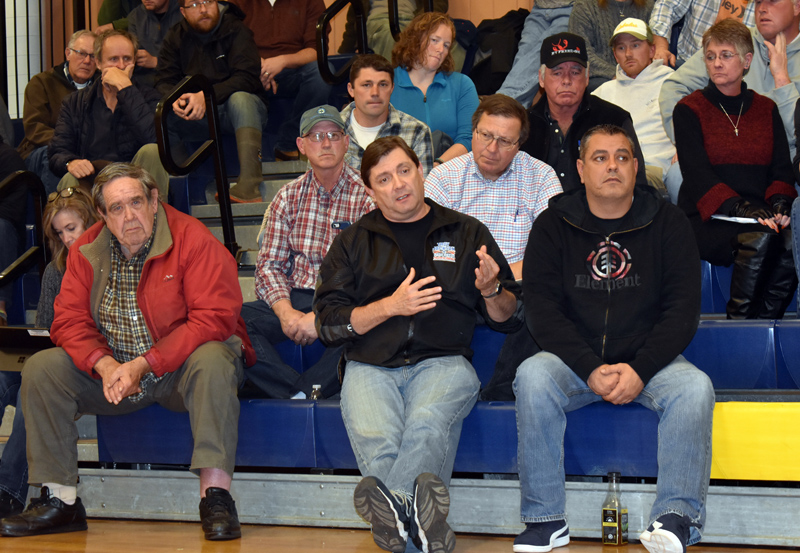 Maine Senate President Troy Jackson, D-Allagash, talks about how the Legislature can advocate for lobstermen with federal regulators during a meeting at Medomak Middle School in Waldoboro on Tuesday, Nov. 5. (Alexander Violo photo)

“I’ve always gone with bigger rope. If we go with weaker rope, it might break off in a northeast storm and we’ll have purple line floating towards Cape Cod,” Hawke said.

Donald Young, of Cushing, brought up ship strikes and entanglements in Canadian waters.

“What is being done about the actual risks to the whales, the people who are actually killing the whales, because we will be back here four years from now?” Young said.

The Canadian snow crab industry poses a threat to the whales, according to Keliher, citing an increase in whale deaths in Canada.

State Rep. Jeffrey Evangelos, I-Friendship, urged those in attendance to write the attorney general and request his support. “Don’t be bashful,” Evangelos said.

Jackson spoke about the possibility of a joint resolution in the Legislature as a way to show support for the industry and oppose harmful regulations.

The population of right whales in the wild is down to about 400 with fewer than 100 breeding females left, according to NOAA. There have been 30 right whale deaths since 2017 and only 12 right whale births have been observed.

The state will submit a final plan to federal fishing regulators later in November, according to Keliher.