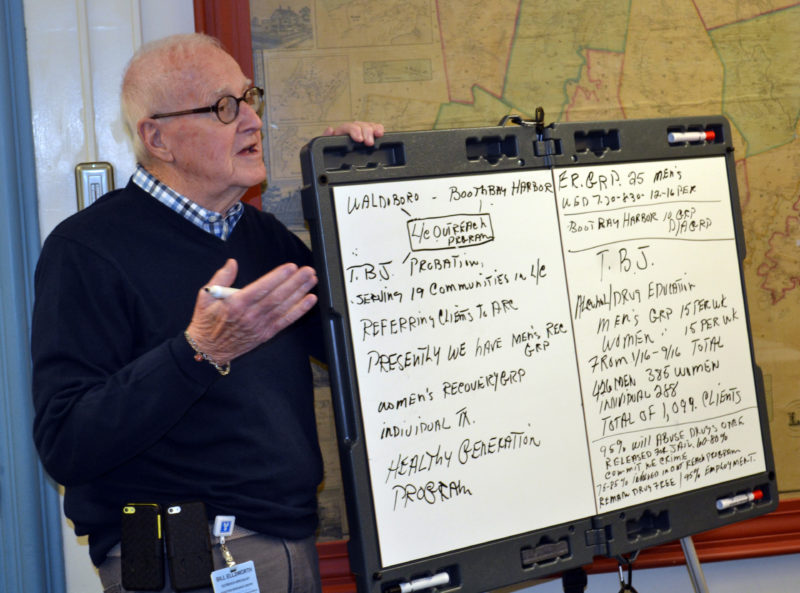 Bill Ellsworth, a recovery coach with the Addiction Resource Center, makes a presentation to the Lincoln County Board of Commissioners on Jan. 3, 2017. Ellsworth died from injuries sustained in a car crash Thursday, Dec. 6. (LCN file photo)

William R. “Bill” Ellsworth, an addiction counselor who worked for over 20 years to facilitate recovery and reduce recidivism in Lincoln County, has died from injuries sustained in a head-on collision on Route 1 in Nobleboro on Thursday, Dec. 6. He was driving to a group counseling session in Waldoboro.

Bill Ellsworth, 80, of Newcastle, died at LincolnHealth’s Miles Campus in Damariscotta, according to Lincoln County Sheriff’s Office Lt. Brendan Kane. His wife, Lois V. Ellsworth, 78, sustained several broken bones and was taken to Miles, then to Maine Medical Center in Portland, where she was in serious condition as of Tuesday, Dec. 11.

Kane said the cause of the accident remains under investigation, but it appears that Shellman failed to yield the right of way to the Ellsworth vehicle. Bill Ellsworth attempted to avoid the truck, but the vehicles collided in the northbound lane.

Shellman was treated at Miles and released, according to Kane. 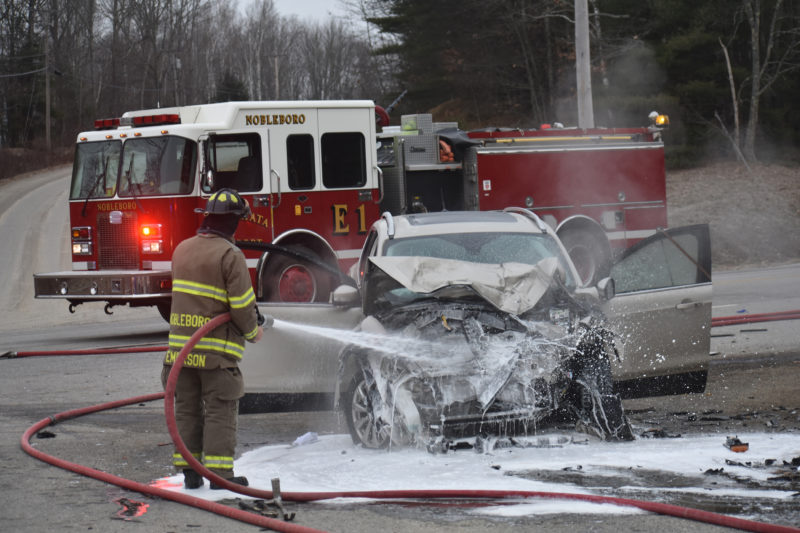 A Nobleboro firefighter douses a 2017 Ford Escape SUV with foam after a two-vehicle collision at the intersection of Route 1 and Back Meadow Road in Nobleboro the morning of Thursday, Dec. 6. (Alexander Violo photo)

“Alcohol and drugs are not believed to be factors, however, blood samples were taken as part of the investigation,” according to a press release from the sheriff’s office. “It is too early to determine if speed was a factor.”

The Ellsworths and Shellman were all wearing seat belts and air bags deployed in both vehicles, according to Kane.

The SUV briefly caught fire, but firefighters quickly extinguished the flames, according to Kane. The crash affected traffic on Route 1 for about three hours. Both lanes reopened around 11 a.m.

A crash reconstructionist with the Sagadahoc County Sheriff’s Office and the Maine State Police Forensic Mapping Unit are assisting with the investigation.

Bill Ellsworth was a recovery coach with Mid Coast Hospital’s Addiction Resource Center. The sheriff’s office contracted the hospital to run an outreach program with the goal to reduce recidivism.

Since the late 1980s or early 1990s, he had worked closely with the sheriff’s office to counsel people with addiction, from his office in the LCSO basement to Two Bridges Regional Jail to support groups around the county.

Bill Ellsworth and his work were the subject of a feature in The Lincoln County News in January 2016 with the title “Lincoln County’s secret weapon in the war on drugs.”

“I have not met anyone more dedicated to their profession,” Sheriff Todd Brackett said then. “He truly believes in the recovery process. He has to take credit for getting this program up and running.”

Bill Ellsworth said 75-85 percent of the participants in his program did not return to jail – several times the national success rate.

The Sagadahoc County Sheriff’s Office contracted the hospital to launch a program modeled after Bill Ellsworth’s.

He based the program on simple concepts.

“There’s no great theory to it,” he told The Lincoln County News. “It’s respect and safety. When you walk into this room, you are respected, no matter what, and it is safe for you to say what you need to say.”

“Some people are taken aback by that,” he said. “They ask, ‘How can you respect me?’”

He would begin to work with an inmate at the time of their arrest and offer support indefinitely thereafter.

A Chevrolet truck at the scene of a two-vehicle collision near the intersection of Route 1 and Back Meadow Road in Nobleboro on Thursday, Dec. 6. (Alexander Violo photo)

“Punishment doesn’t work,” he said. “We need to educate people. We need to encourage them.”

Ellsworth was a graduate of the University of Maine and the New England School of Addiction Studies. He retired twice and returned twice to the program he started.

As the addiction crisis exploded in recent years, he worked more hours. The county expanded its contract with his employer so, for the first time, he could work alongside another recovery coach.

“His honest and sincere approach to recovery from substance abuse has touched many lives here in Lincoln County over the past 22 years, including the lives of those of us who worked with him,” the sheriff’s office said. “Bill will be sorely missed.”

“We work with him on a weekly basis, some of my staff on a daily basis,” Brackett said in a phone interview. “This one hits close to home for a lot of us.”