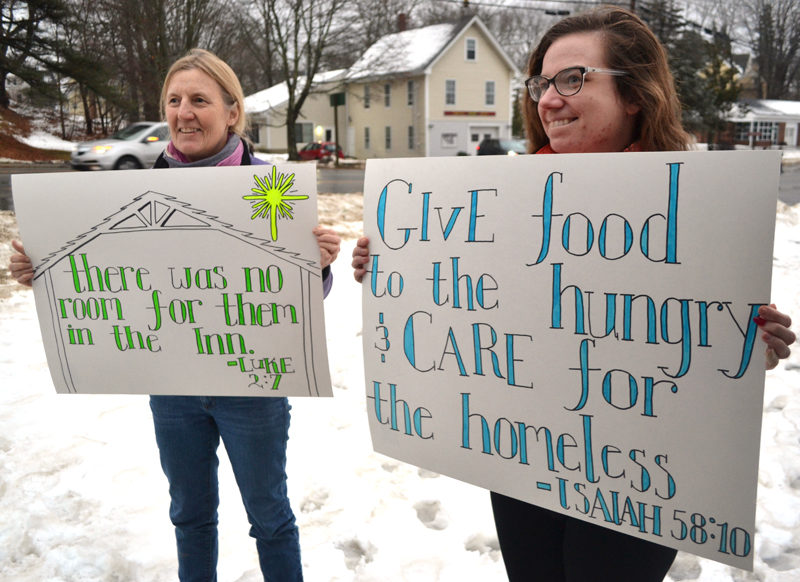 Jeanne Titherington (left) and her daughter, Anna Nutter, both of Bremen, hold signs during a service at Veterans Memorial Park in Newcastle on Sunday, Dec. 18. (Maia Zewert photo)

Twenty people gathered in Newcastle’s Veterans Memorial Park the afternoon of Sunday, Dec. 18 to remember homeless people from Maine who passed away this year, including two from Lincoln County.

This is the third year area churches have held the service. Mariellen Whelan, a member of the Ecumenical Council for Homelessness Prevention, brought the idea to Lincoln County after attending a similar event in Brunswick.

Carolyn Neighoff, pastor of the Water of Life Lutheran Church, welcomed people to the service and Damariscotta Baptist Church Pastor Marilee Harris read a prayer for the homeless. 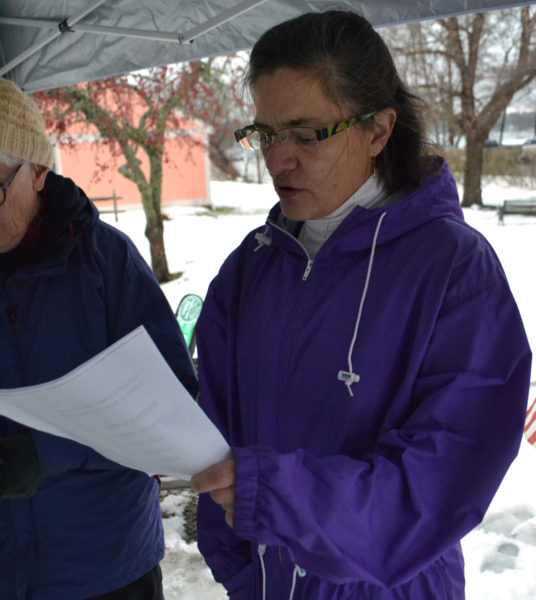 Damariscotta Baptist Church Pastor Marilee Harris reads a prayer for the homeless during a service at Veterans Memorial Park in Newcastle the afternoon of Sunday, Dec. 18. (Maia Zewert photo)

“This grew out of the Ecumenical Council for Homelessness Prevention trying to bring attention to the homeless in the area,” Neighoff said. “You might not see them, but they are here.”

The names of 26 people from Maine who died while homeless were read, and there were readings of Psalms. The service also remembered refugee families who died homeless and stateless and the homeless who may have passed away without the public being aware.

After a moment of silence, the attendees sang “Silent Night” with musical accompaniment from Heather Hardy and Kaity Newell.

Six homeless men and women from the Midcoast who died were remembered in the 2015 service.

Whelan said the services will continue to remember those who die while homeless.

“We’re acknowledging that these 26 people lived and that they died,” Whelan said.