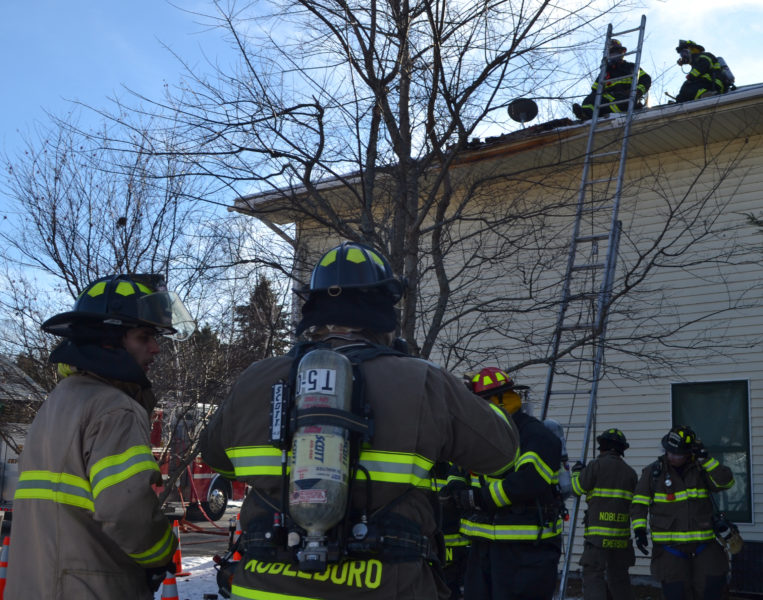 Firefighters from Jefferson, Nobleboro, Somerville, Waldoboro, and Whitefield responded to 252 East Pond Road after a chimney fire spread to the space between the flue liner and brick of the chimney on Sunday, Dec. 11. (Maia Zewert photo)

Area fire departments responded to 252 East Pond Road in Jefferson on Sunday, Dec. 11 after a chimney fire spread to the space between the brick and the flue liner of a house.

The Lincoln County Communications Center originally paged the Jefferson Fire Department at 10: 30 a.m. for a chimney fire. Firefighters were able to quickly extinguish the fire in the chimney, according to Jefferson Fire Chief Walter Morris.

After the fire was extinguished, crews used thermal imaging cameras to check for any extension of the fire, Morris said. The cameras indicated there was a temperature rise in the space between the brick of the chimney and the flue liner.

Once firefighters determined the fire had spread outside the chimney, the fire was upgraded to a structure fire and mutual aid was paged, Morris said.

Crews worked on each floor of the house and on the roof to extinguish the “pocket of heat,” while limiting the damage to the home, Morris said.

The homeowners were home when the fire started, and immediately called 911, Morris said. There were no injuries reported.

“They absolutely did the right thing,” Morris said

The Nobleboro, Somerville, Waldoboro, and Whitefield fire departments responded to the scene, along with the Waldoboro Emergency Medical Services. The Waldoboro Fire Department also provided station coverage in Jefferson, and the Washington Fire Department was on standby at its own station, Morris said.

To reduce the risk of chimney fires, Morris recommended regular maintenance, including cleaning chimneys at the start of the season, and burning wood stoves hot to prevent the build-up of creosote.

“Those are life-saving devices,” Morris said.