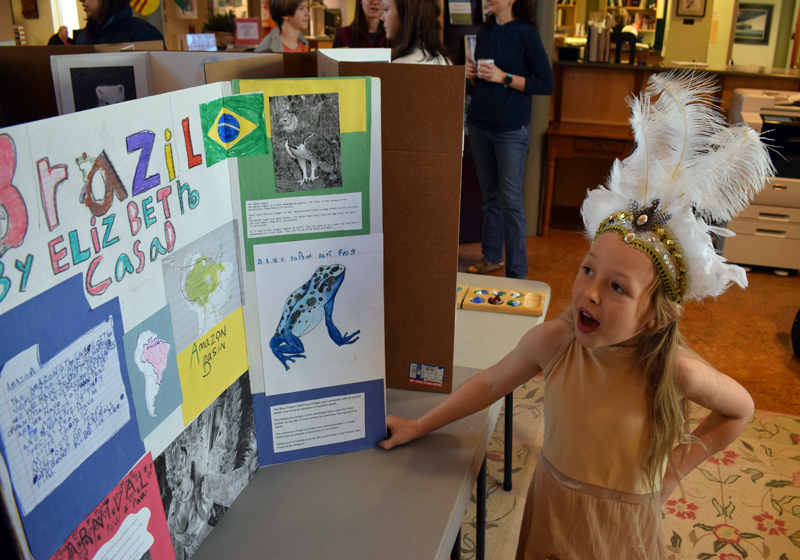 Elizabeth Casad, 8, of Bristol, answers a question about her project on Brazil during Homeschooler Cultural Day at Skidompha Library in Damariscotta on Thursday, Jan. 30. Fourteen homeschooled children from across Lincoln County participated in the event. (Evan Houk photo)

Fourteen homeschooled children from eight families across Lincoln County put their knowledge on display in the atrium of Skidompha Library as part of Homeschooler Cultural Day on Thursday, Jan. 30. 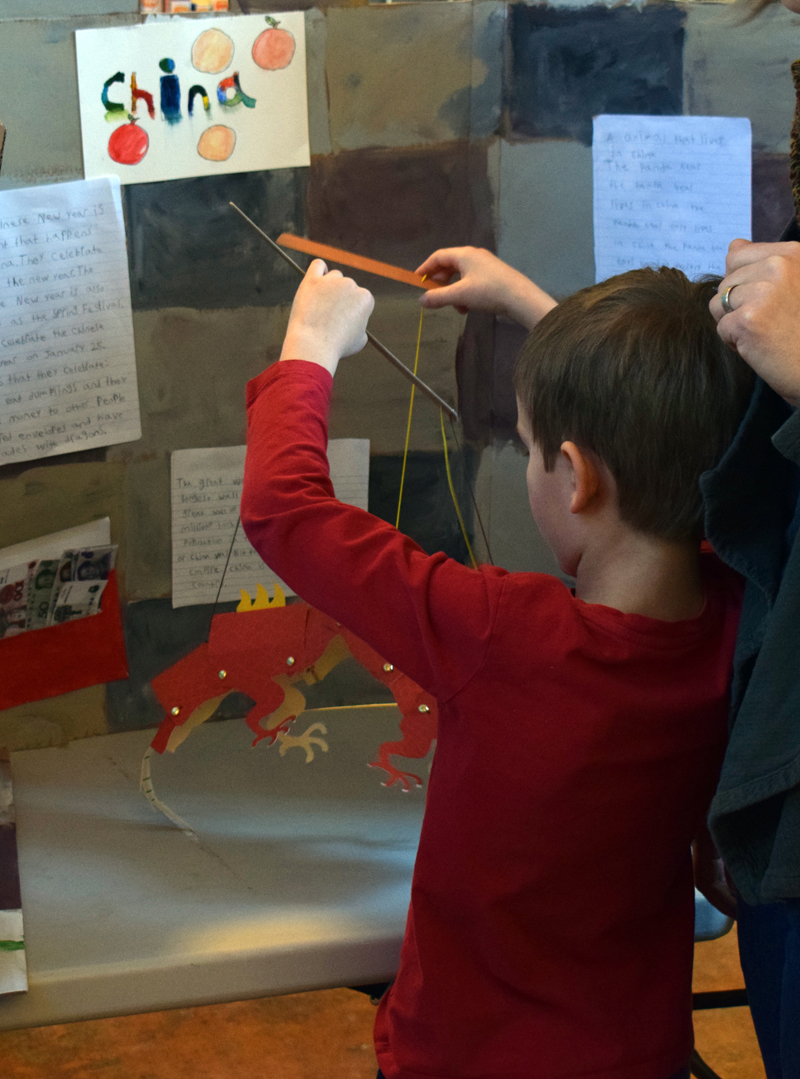 A young boy plays with a prop at the China display during Homeschooler Cultural Day at Skidompha Library in Damariscotta on Thursday, Jan. 30. (Evan Houk photo)

From 10-11:30 a.m. the students, ranging in age from 7-12, stood by their poster board displays and explained them to anyone who asked.

The students and their families live all over Lincoln County, from the Twin Villages of Damariscotta and Newcastle to Alna, Bristol, and Waldoboro.

For the project, each student researched a different country. The students then created their displays using facts and figures, enticing images, and interactive features. Some kids even dressed in traditional clothing.

About 20 people filed through the Damariscotta library Thursday morning and engaged the excited students in talking about their independent projects.

Oliver Goding, the 7-year-old son of Casey Goding, had a display of India that featured information about Mahatma Gandhi, ways to say hello in the various languages spoken in India, and images representing Indian people and culture.

Oliver even had some dal, an Indian bean or lentil dip, with naan bread on the side for passersby to dip in it. He agreed that the dal tasted kind of like chili.

Casey Goding, of Bristol, and Jessie Trafton, children’s librarian at Skidompha, were the main organizers of Homeschooler Cultural Day. Casey Goding said she and other parents belong to a group of homeschooling parents who share tips and experiences with each other.

She said the group tries to organize monthly field trips for their children. The last trip was to the Maine Maritime Museum in Bath.

Casey Goding said her son and other children involved in the cultural day previously attended Damariscotta Montessori School in Nobleboro before switching to homeschooling. 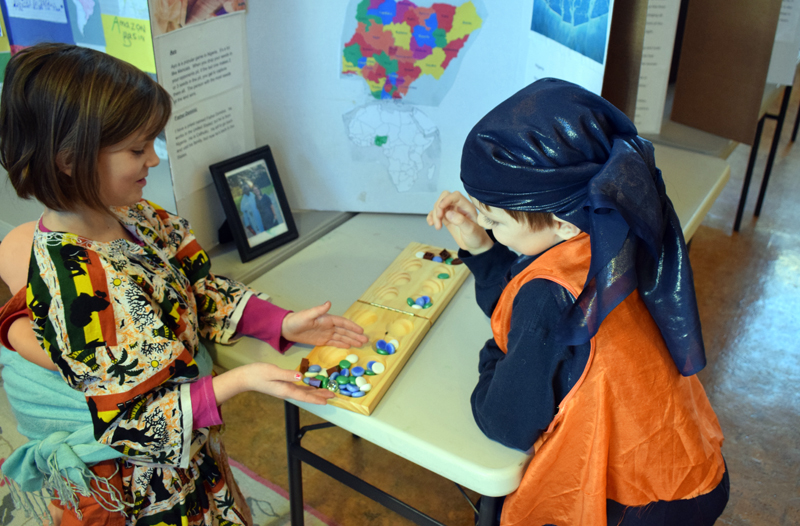 According to the Maine Department of Education, as of April 2019, there are 5,963 children receiving home instruction in the state.

Casey Goding said a main source of inspiration for her is the homeschooling co-op EarthSchool, which has locations in Brunswick and Gorham. She said EarthSchool has about 30-40 classes available that are taught by homeschooling parents.

EarthSchool was created in 2011 to “grow an inclusive and supportive community of homeschooling families,” the co-op’s website says.

Casey Goding said she would like to form a similar co-op in Lincoln County eventually, and possibly use Skidompha as a meeting place for the group.

Eventually, Oliver made his way over to fellow 7-year-old Agnes Eddyblouin’s Nigeria display to fiddle with the ayo board she had set up. Ayo is a traditional Nigerian mancala game played between two players on a wooden board with small stones or beads. 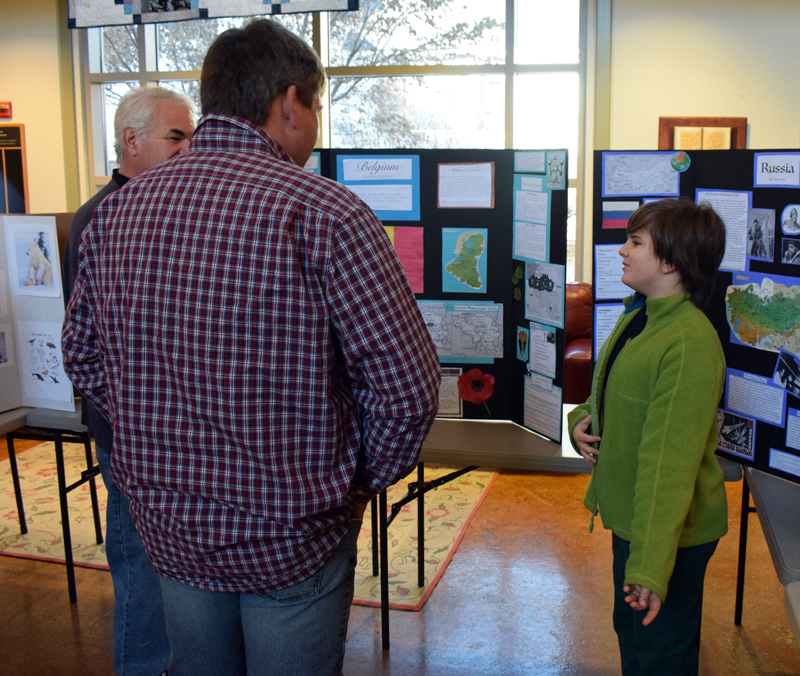 Agnes Eddyblouin was dressed in traditional Nigerian garb with a baby doll swaddled across her back.

Jonah Smith, 11, attended the event with his two brothers, Liam and Finn. He was happy to offer a wealth of information to any visitor on either his Belgium display or Liam’s presentation on Russia.

Elizabeth Casad, 8, reveled in showing off her colorful and informative Brazil setup. Jen Casad asked her daughter to give the real reason she chose Brazil. 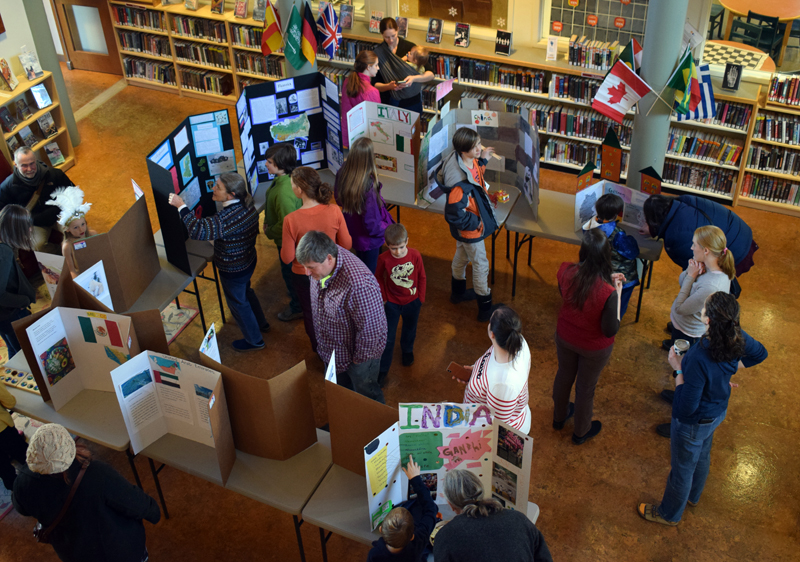 Jen Casad said she too switched from the Damariscotta Montessori School to homeschooling. She is extremely happy with the freedom homeschooling gives her to shape her daughter’s education.

For more information about homeschooling in Lincoln County, email Trafton at children@skidompha.org.