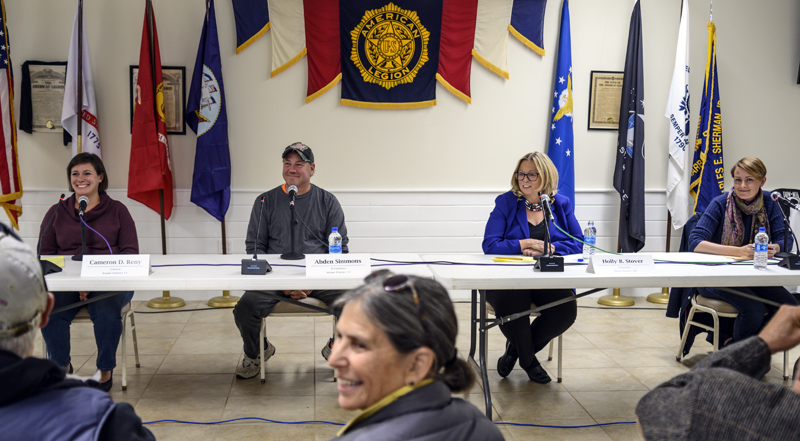 There was more for candidates to agree rather than draw distinct party lines on at the Lincoln County News/Boothbay Register candidates forum on Monday, Oct. 3.

A crowd of over 50 piled into the American Legion Post No. 36 to hear out House District 48 candidates Holly Stover, a Democrat and incumbent, her Republican challenger Tricia Warren and Senate District 13 candidates Abden Simmons, a Republican, and Democrat Cameron Reny.

Bristol native Reny said there is no silver bullet for the housing debacle she said continues to grow at alarming rates. The educator took a different approach by looking at possible long-term solutions, including investing in vocational and trades-based education. That would let students get a head start toward professional careers in fields like electrical, plumbing and carpentry among others, she said.

“I don’t know if you all know of a builder who will be available in the next three years, but I don’t,” Reny said. “We need more skilled builders … A lot of schools in the area need to be expanding that and making sure every student who wants to go into one of those trades and have a good paying job right off the bat has the opportunity to do so.”

Simmons, a lifelong maritime industries worker from Waldoboro, said housing issues come down in part to regulations on the local level, ordinances and geographical priorities, and on the national level, building materials and the lack of local alternatives to corporate lumber. How can prices continue to go up – $150 to $350 per square foot over the past couple years – when Maine is rife with timber, he asked.

“Why aren’t we producing it here?” Simmons said. “If we could produce it here, I don’t see why the price shouldn’t go down … But no, we have to buy it from another state, another country … It’s all regulations.” 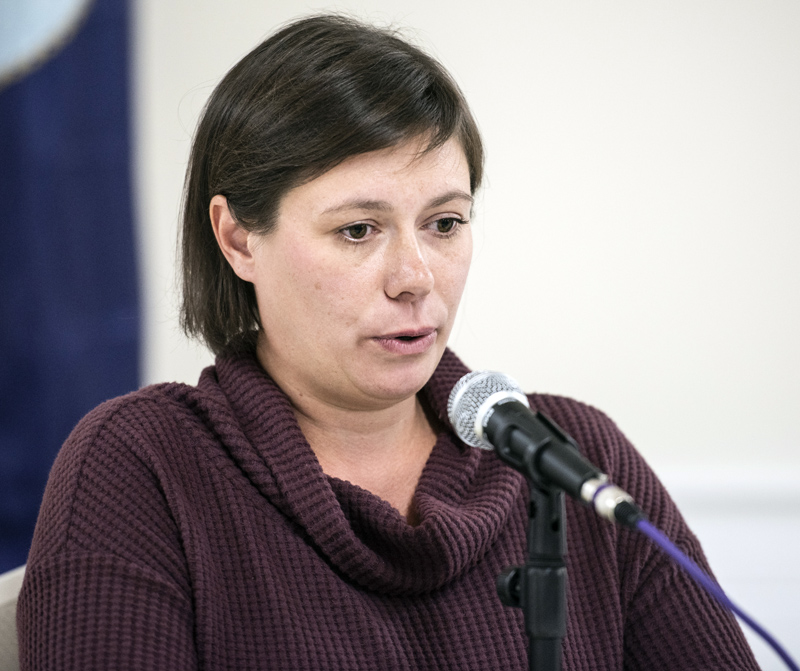 Local initiatives like Boothbay Region Development Corporation can put a dent in the housing crisis, but are only a start and it will take philanthropy and local, state and federal funding to see significant changes, said Boothbay’s Stover. Last house session’s L.D. 2003 bill opened up the possibility for towns to overhaul accessory dwelling limits and set aside funds to connect towns with consultants to help identify progressive ordinance changes.

“(But) there really has to be that level of interplay to connect between funding sources,” Stover said. “It is very expensive to construct housing and it’s more expensive than ever.”

Boothbay Harbor’s Warren agreed with much of what her counterpart and Senate candidates had to say, but added another perspective: infrastructure, specifically water, sewer, power and broadband. Access to utilities is a major factor in adding any new housing developments and that type of investment for rural and outlying areas may have to come in part from Augusta and from philanthropy, she said.

“Funds have to come down the pipeline in order to be able to have those houses,” Warren said.

With the recent national advertising campaign blasting lobstering as environmentally devastating, the four candidates agreed fishermen, communities and the state need to fight to save the industry. Candidates also agreed lobstermen are conservationists by default. Just like farmers, they follow all the regulations that make their way of living sustainable, said Simmons. He said people like to point out most lobstermen make over six figures, but forget about the huge investments lobstermen need to make to keep their boats running and their gear catching lobster. With the lobster industry taking in over $800 million last year, around $4.2 billion was invested back into the industry, he said.

“They’ve invested $100,000’s into their business. They don’t want to be out of a job, so we need Maine to promote or debunk anything this organization has put out there … (Advertisements) reaching out to everybody and they’re making us look bad and it’s ridiculous,” Simmons said. “I believe the lobster collaborative and the state of Maine should be stepping right up and putting every ad they can and advertising all across the country.”

Stover said the lobster industry drives most other industries on the coast, so more than fishermen are threatened by the nationally driven negative publicity. The fight is going to have to come foremost from Maine’s federal delegation and state delegation, she said.

Lobstermen are the best environmentalists there are and always have been, said Stover.

“It’s our culture, it’s our heritage and it’s our economy,” Stover said. 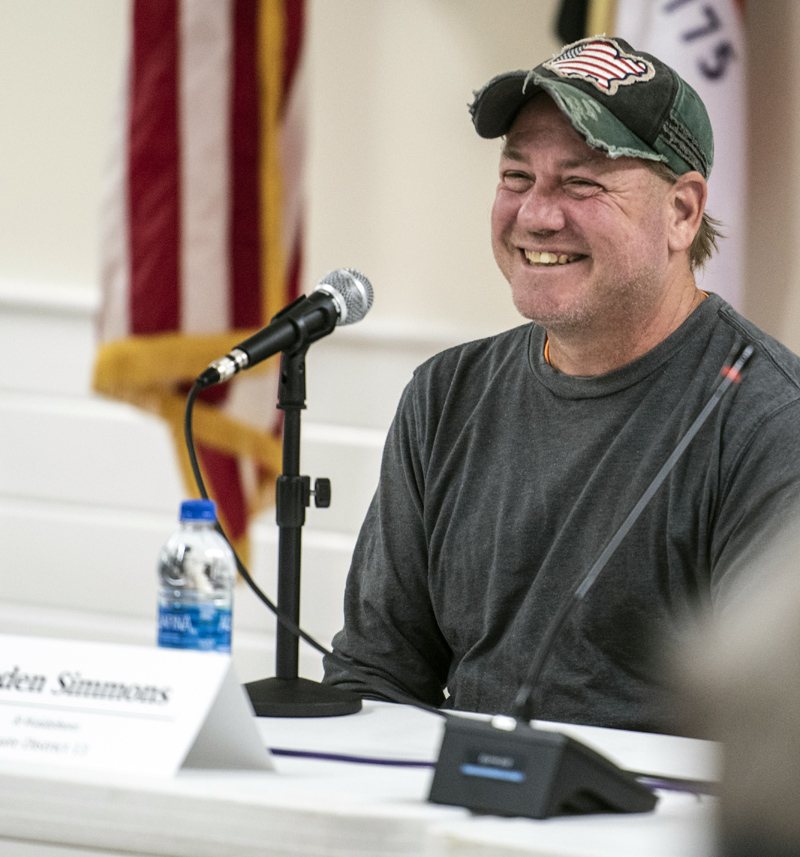 Warren said as dire as the lobstering situation is right now, the prospect of crippling regulations and negative activism against lobstering is not new.

“Every single fisherman I have met has said, ‘Yup, we’ve bent over and taken it.’ The fact is they shouldn’t,” Warren said.

Reny said the state needs to be doing more to support all of Maine’s heritage industries, especially the lobster industry. Lobstering is quintessential Maine, a way of life, and is not just a job, but an industry composed of family-based small businesses, she said.

The panel also echoed problems with rural education, each candidate taking a different approach to solutions. Stover said Maine’s investment in two years of free community college for classes 2020, 2021, 2022, and 2023 is a big step in helping students overcome crippling debt for a two-year program and a good head start in a four-year program. The initiative puts students in a place where they can choose to enter the trades or continue on to higher education, she said.

“We only funded through ’23, I hope we can continue because if we want Maine’s future to be strong, the way to do that is through educating our kids,” Stover said.

Warren said when she asked Boothbay Region High School Principal Tricia Campbell what she would want to invest in if the sky was the limit. Campbell said, “Mental health.” Mental health needs for youth have been a steadily growing issue in schools since before the pandemic began and projections for dropouts in the next year for Maine are around 12,000 students, said Warren. 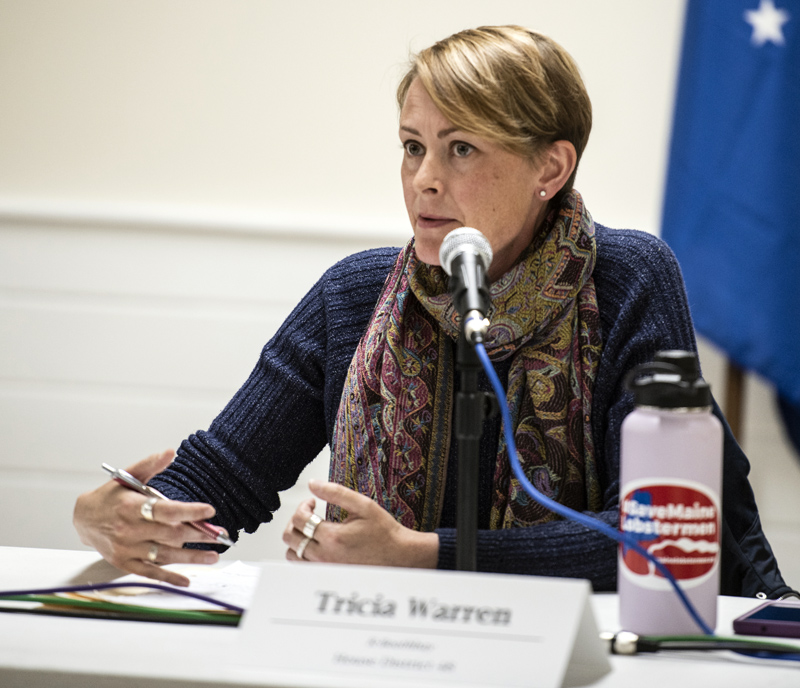 One of the solutions is investing in vocational training and programs in science, technology, engineering, arts, and math (STEAM), which will help prepare students for both college and the trades, she said.

“Those types of opportunities will get them more focused on their future, not being depressed, not having anxiety … We need to talk to each other, we need to be kind to each other and we need to have open dialogue with our children,” Warren said.

Reny focused on the broader national concerns on work in the classroom while Simmons addressed state and local funding. Classroom and curriculum issues and any concerns about public education are best dealt with by participation, said Reny. There are plenty of opportunities by connecting with teachers and school administration, parent-teacher organizations and associations and by going to meetings when big items like curriculum reviews come up, she said.

She said the backlash against themes surrounding race and literature is a manufactured controversy and it makes her furious. 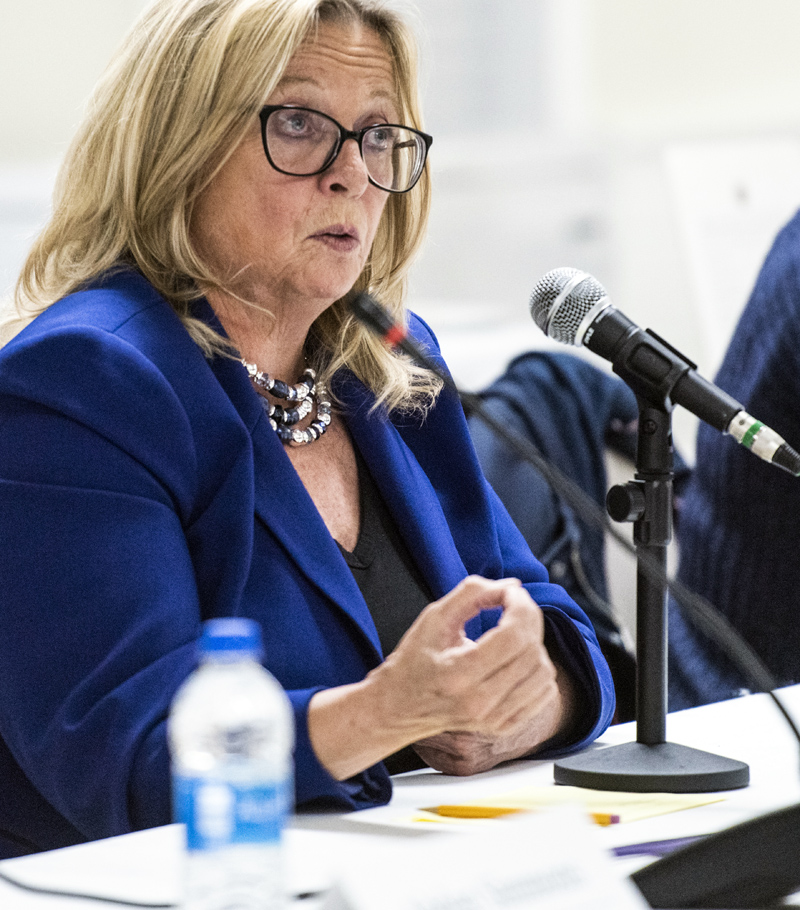 Simmons said his issue with Maine’s approach to education is the 55% flat contribution the state makes. What results is wealthier communities getting the bulk of state funding while outlying schools depend much more on lower incomes to keep schools running and up-to-date, he said.

“The formula needs to change. These areas up here need the money,” Simmons said. “We don’t have the tax base that Cape Elizabeth, Portland, and all these other places have. The problem is I ask teachers, I ask school administrators to help me fix this. They don’t have the backbone to do it and go against their own people.”

The candidates agreed health care and pharmaceutical costs are unsustainable and a lack of access has been a factor in social mobility. Warren spoke of her recent battle with cancer, which she was cleared of in January, and the complicated situation with insurance and costs around screenings, chemotherapy, radiation and surgery.

Warren said she knew something was wrong before her diagnosis, but was not able to react until finding an insurance plan she could afford. After finding a plan, and waiting for three months for it to kick in, she still had to pay a fee to get a mammogram.

Warren said we need to work at state and federal levels to cap costs of pharmaceuticals and testing.

Health care is a right and no one should be bankrupted by seeking the healthcare they need, said Stover. While Maine cannot yet afford universal healthcare, the legislature needs to do everything in its power to bring costs down and get people plans they can afford, she said.

“Every time we try to control those costs, those lobbies are quite mighty and fight back with everything they’ve got. At some point we’ve got to say, ‘No more,’” Stover said. “Insurance should be affordable, coverage should be for everyone … We have to find a way to control prescription costs, we have to do better to make sure insurance companies are held accountable and that their fees are affordable to everyone.”

The candidates forum series will continue with a forum on Thursday, Oct. 6 at the Waldoboro municipal building and feature the candidates for House District 62 and Lincoln County Commissioner District 2.

The fourth and final forum will be held on Thursday, Oct. 13 at Great Salt Bay Community School in Damariscotta and feature the candidates for Senate District 13, and House Districts 45 and 46.

All forums will begin at 6 p.m. For more information, email editor@lcnme.com.