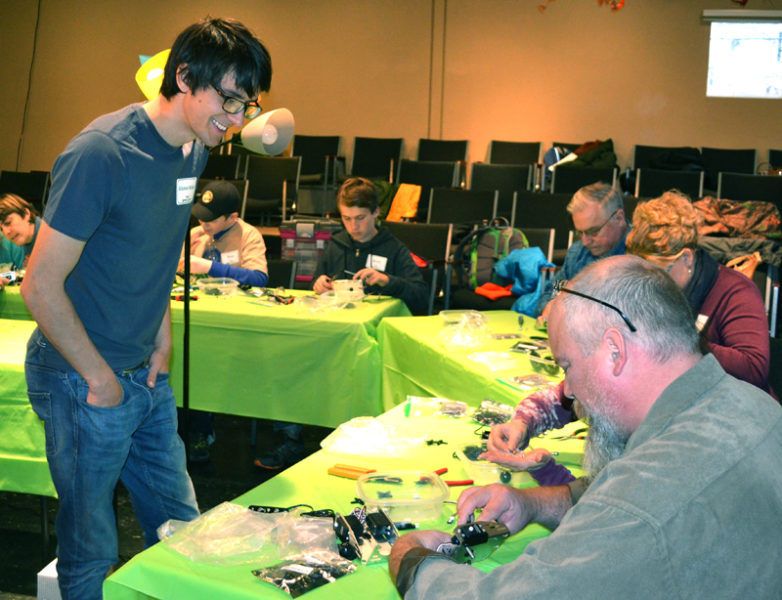 Mike Lee (left) looks on during the construction of robots at Skidompha Library in Damariscotta on Sunday, Nov. 20. Lee recently joined the library staff as gizmo educator and coordinator. (Maia Zewert photo)

Twenty Midcoast residents and students gathered at Skidompha Public Library on Sunday, Nov. 20 to assemble self-driving robots that will be used for research at the Massachusetts Institute of Technology.

Berthold Horn, a professor who works in MIT’s Computer Science and Artificial Intelligence Laboratory, will use the robots in his research about traffic flow and how to improve congested traffic.

Horn reached out to Gizmo Garden, an educational program that teaches students engineering skills, to see if he could purchase robots built during programs at Skidompha Library and Bowdoin College in Brunswick, according to Gizmo Garden technical adviser Bill Silver.

Bill and Judy Silver, of Nobleboro, created Gizmo Garden as a way to use their engineering backgrounds to give back to the community. 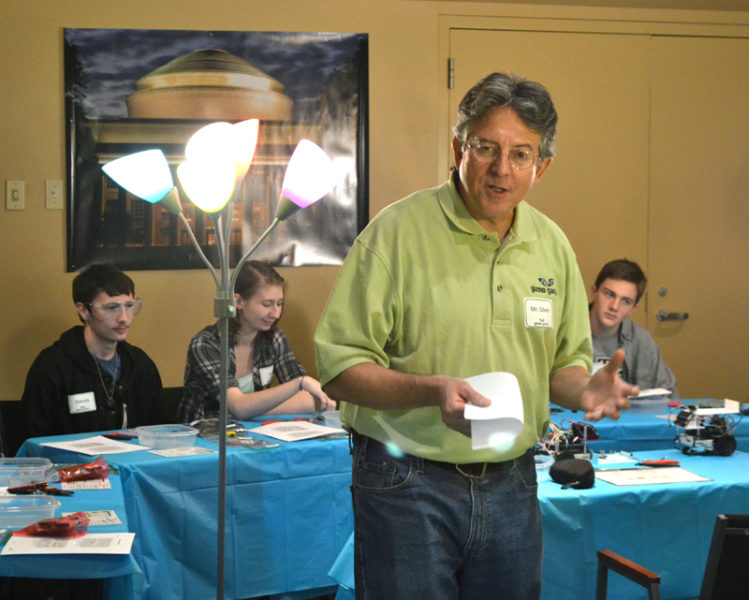 Gizmo Garden Technical Director Bill Silver speaks to a group of students and community members assembling robots at Skidompha Library in Damariscotta on Sunday, Nov. 20. Berthold Horn, a professor at the Massachusetts Institute of Technology, will use the robots for his research on traffic flow. (Maia Zewert photo)

Horn, whose work is funded by the Toyota Research Institute, had completed a computer model of how traffic flow could be improved and was looking to use robots to test the model, Bill Silver said.

“I don’t think it’s ever happened where a researcher has asked a bunch of middle school and high school students to build research robots. It’s very exciting,” Bill Silver said.

The robots needed to be modified slightly to fit what Horn needed for his research, Silver said. The chance to build the robots for MIT was offered to students who had participated in either Gizmo Garden’s February break program at Skidompha or the six-week Gizmo Garden workshop at Bowdoin College’s Upward Bound program this past summer.

“These students already had the background, and now they got to put it to use,” Silver said.

All materials for the robots were donated, Silver said. The library will receive approximately $9,000 from MIT for engineering education, including for Gizmo Garden.

The participants were split up into two teams, with one team building the sensors for the robots while the other built the “brains and the nerves,” Silver said.

Joining the Silvers in overseeing the construction was Jamie McGee, a Newcastle resident and assistant professor of electrical engineering at Southern Maine Community College in South Portland. McGee led the Upward Bound program at Bowdoin College during the summer. 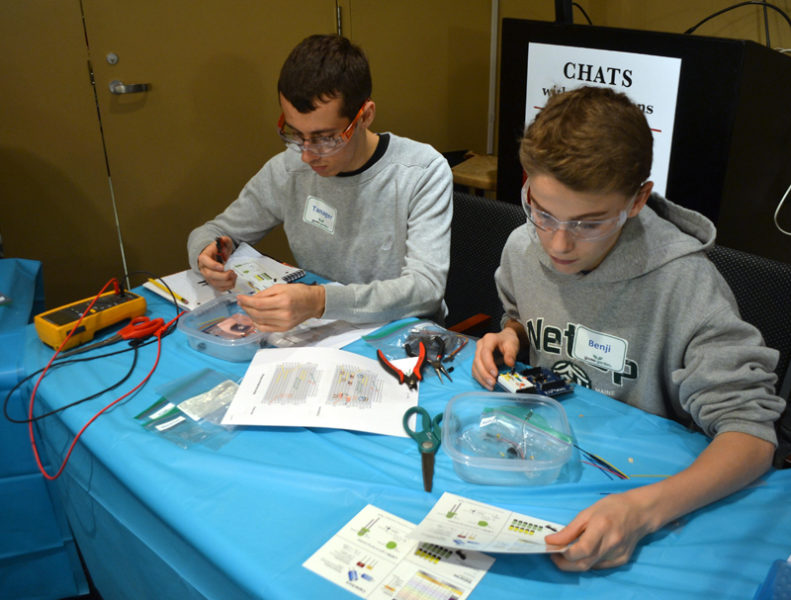 In addition, Skidompha Library’s new gizmo educator and coordinator Mike Lee assisted students and community members with robot assembly. Lee, who joined the library’s staff Nov. 15, said he is inspired by the program’s vision to encourage all kids to learn more about math and science.

Applications for Gizmo Garden’s program during February break are now being accepted and are due Dec. 7.

For more information about Gizmo Garden, go to gizmogarden.org or find Gizmo Garden on Facebook.