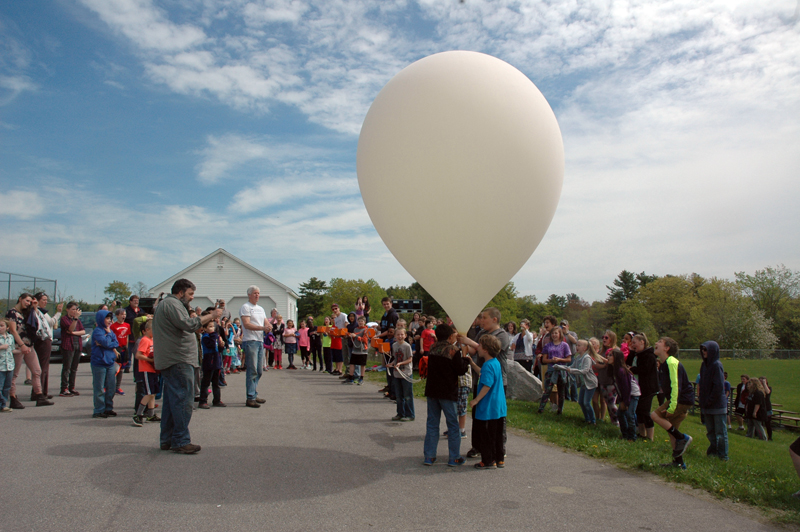 A high-altitude balloon carrying the experiments of students from Jefferson Village School and Bristol Consolidated School was launched near the JVS playground the morning of Wednesday, May 24.

Embarking on its journey to Ellsworth, the high-altitude weather-forecasting balloon was sent off by a group of excited students who cheered and jumped as the research vessel began its initial ascent to near space.

The balloon’s payload boxes carried a number of experiments, including experiments involving worms, homemade slime, and pumpkin seeds. Prior to its launch, students helped prepare the balloon for its journey.

According to Dr. Richard Eason, an associate professor in the Electrical and Computer Engineering Department at the University of Maine at Orono, the balloon is capable of entering the stratosphere, reaching an altitude of 120,000 feet.

Eason, the chief engineer of the high-altitude platform, was on hand with members of the university’s faculty and undergraduate students to assist with the launch.

Making the trip with Eason from Orono to Jefferson were Andy Sheaff, a faculty member, and undergraduate students Derek Haas and Cameron Sullivan.

Eason said the hydrogen balloon expands as it rises through the atmosphere, eventually popping, whereupon the payload boxes are brought safely back to earth with the aid of a parachute. 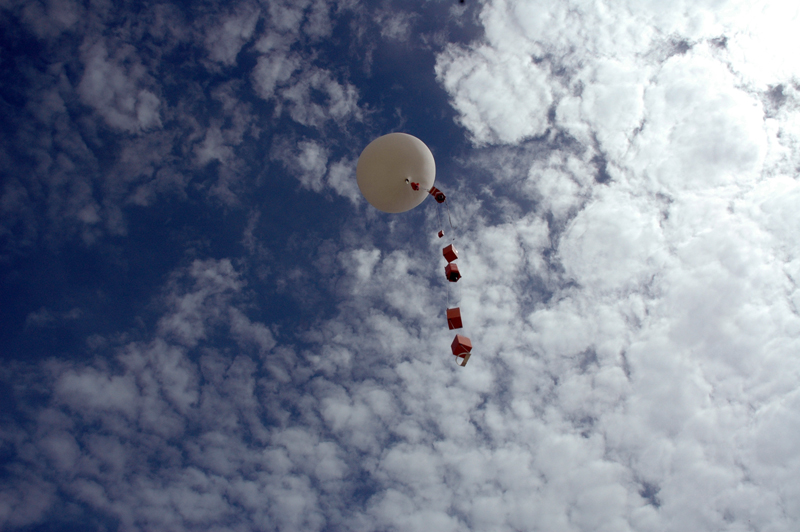 “The balloon will rise about 1,000 feet per minute,” Eason said.

Eason said a GPS in one of the balloon’s payload boxes allows his team to track the balloon.

“The prediction is it will end up near Ellsworth. This is our 66th balloon launch and we haven’t lost a payload,” Eason said.

Jana Hall, controller and director of education programs at the Maine Space Grant Consortium and a JVS parent, said the Jefferson school had been trying for over a year to host the launch day, waiting for the conditions to be right to ensure a successful launch.

After the launch, the balloon was tracked as it progressed through its journey, reaching a high enough altitude for an on-board camera to take photographs where the curvature of the planet and the blue haze of Earth’s atmosphere were visible.

The launch was part of the Maine Student High Altitude Platform program, a program of the Maine Space Grant Consortium. The program is designed to increase students’ interest in science, technology, engineering, and math – STEM – by enhancing their technical skills and research abilities.

Over 850 affiliates from universities, colleges, industry, museums, science centers, and state agencies make up the network, which works to expand opportunities for Americans to understand and participate in NASA’s aeronautics and space projects by supporting and enhancing science and engineering education, research, and public outreach efforts.