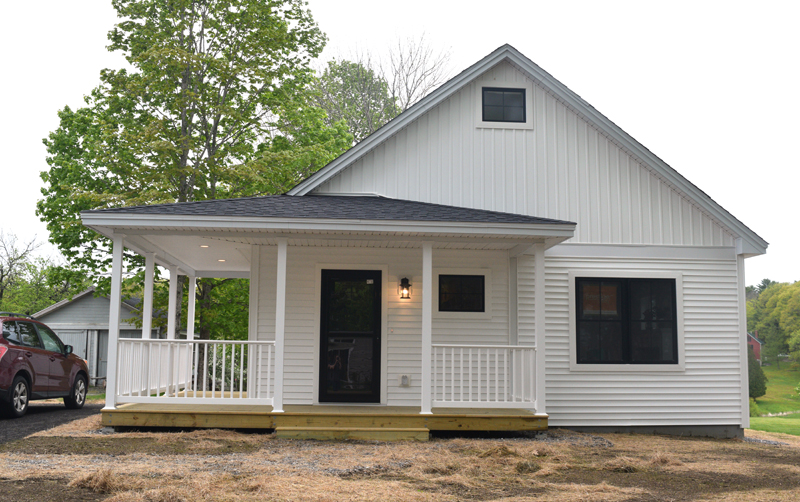 A soon-to-be homeowner will close on a new Habitat for Humanity home on Federal Street in Wiscasset later this month. (Jessica Clifford photo)

After 1,000 hours of work by 150 Habitat for Humanity volunteers, a Wiscasset woman has a new modular home at 142 Federal St. in Wiscasset.

Habitat for Humanity/7 Rivers Maine, one of nine Habitat affiliates in the state, creates homeownership opportunities for people with limited incomes by building sustainable housing as well as repairing and weatherizing existing homes.

The 7 Rivers Maine affiliate covers Lincoln and Sagadahoc counties, as well as Brunswick and Harpswell in Cumberland County.

Since 7 Rivers Maine was established in 1991, 46 houses have been built, Mark Primeau, executive director of the affiliate, said.

A May 29 open house gave locals a chance to tour the Wiscasset home and meet the 7 Rivers Maine staff who helped to make it happen.

According to Kathy Smith, director of development and communications for the affiliate, unlike a traditional Habitat for Humanity house, built from the ground up, the new Wiscasset house is a modular home. It is 936 square feet with two bedrooms and one full bathroom.

Modular construction still requires volunteers to install flooring and siding, and to build a porch.

“Every time we build a house we lose money,” Primeau said.

Habitat for Humanity is “not like a traditional builder,” he said later. In order to fund its projects, staff members write grants, collect donations, and hold an annual Spring Walk to Build fundraiser.

Work began on the Wiscasset house in October 2018 and 7 Rivers Maine is ready to close the transfer to the new homeowner in June, Primeau said.

Soon-to-be homeowner Carla Glenn, who attended the open house, came to the Wiscasset area from South Carolina to help support her aging parents and decided to stay. Now she lives in temporary housing and works at Rising Tide Co-op in Damariscotta.

Glenn said she learned about the opportunity to apply for Habitat for Humanity housing from a notice on a bulletin board at the Wiscasset Community Center. She applied in August of last year.

After being accepted, Glenn put in 200 “sweat equity” hours by working on her house alongside volunteers. In addition, she worked at the Topsham-based Habitat for Humanity 7 Rivers Maine ReStore, a discount outlet open to the public that sells new and lightly used building materials, fixtures, furniture, appliances, and other items.

“I feel really grateful and blessed to be the recipient of this house,” she said. “It’s been a great opportunity.”

Garrett Therrien, the Habitat for Humanity site supervisor for the project, “pulled everything together,” Glenn said. “He’s done exceptional work,” she added later.

In 2017, the house and property on the right of 142 Federal St. was up for sale and 7 Rivers Maine purchased it, Smith said.

“Habitat worked with the homeowner to subdivide the property into three parcels, two building lots and the remaining property with the existing house,” Smith wrote in an email after the open house. “The second new home will be built next year.”

The existing house was sold to someone who makes less than 80% of the median income in the area.

Since the house at 142 Federal St. is in Wiscasset’s historic district, staff from 7 Rivers Maine had to receive approval for the house’s design from the Wiscasset Historic Preservation Commission.

“It’s a little dressier because it’s in the historic district,” Dottie Cattelle, project manager for the house, said. In Cattelle’s roughly 20 years of experience volunteering with Habitat for Humanity, she believes this is the first house to be built in Wiscasset.

According to Smith, the commission found that the original design, similar to a ranch-style house, needed modifications to fit district guidelines. The second design, which was approved, added a small window to the pitched roof and a wrap-around porch with columns.

Primeau said that although “there’s always resistance to change,” he thinks people will be happy to see the final product in Wiscasset’s historic district.

Glenn’s house is “not really representative of what we typically put in” a house, though, Smith said.

A family member or friend of a new homeowner can donate funds for an upgrade in a Habitat for Humanity house, Smith said. An upgraded amenity in Glenn’s house is a fireplace with stone around it.

Smith said 7 Rivers Maine receives donated stoves and refrigerators for every house through a long-term partnership between Habitat for Humanity International and Whirlpool.

“Habitat homeowners apply for and are qualified for a mortgage amount they can afford. This could be through a local bank or through a first-time/lower-income homebuyers program, such as through Maine (U.S. Department of Agriculture) Rural Development,” Smith said.

Sheila Sawyer, an insurance agent with Carl M.P. Larrabee Agency in Wiscasset, sponsored the event, which had a raffle and refreshments.

Throughout the event, Glenn showed excitement and gratitude for her new home.