Pastor Char Corbett, of The Second Congregational Church in Newcastle, far left, addresses representatives of local charitable organizations during a meeting at the church Thursday, June 20. The coalition discussed how to help Portland deal with the recent influx of nearly 300 asylum-seekers into the city. (Evan Houk photo)

Nearly 50 people turned out at The Second Congregational Church in Newcastle on Thursday, June 20 to discuss how Lincoln County residents can help Portland deal with the recent influx of asylum-seekers into the city.

Pastor Char Corbett, of The Second Congregational Church, facilitated the meeting after receiving calls and emails last week from church members asking what they could do to help Portland.

“I started getting messages from the Maine Council of Churches and the United Church of Christ about the expanding needs in Portland … so I put out a general email to three of our ecumenical groups here in the Newcastle-Damariscotta area and said, ‘Is anybody interested? I’d be happy to host a conversation,’” Corbett said as she opened the meeting.

“From my contacts, I understand that we have, in recent weeks, received 292 asylum-seekers and they’re all families, 87 families,” Corbett said.

Corbett said her numbers may not be exactly correct, but they are similar to those reported in the media.

According to the Portland Press Herald, nearly 300 asylum-seekers have arrived in Portland since June 9 and more are expected in the coming weeks.

Corbett said June 20, the day of the meeting, was World Refugee Day, and went on to talk about the circumstances the majority of the asylum-seekers face.

The Portland Press Herald reported that most, if not all, of the asylum-seekers in Portland entered the country at the southern border, having traveled from the African nations of Angola and the Democratic Republic of the Congo by way of a months-long journey through Central America.

The city’s shelter for homeless families is full and the Portland Expo has been converted into an emergency shelter with 350 cots set up.

Portland’s $200,000 government-assistance fund has already been over-extended by $90,000, according to a June 16 article in The New York Times.

The New York Times article goes on to say that, “since October 2018, more than 700 migrants from Africa have been apprehended at what has become their main point of entry, the Border Patrol’s Del Rio sector, a largely rural stretch of Texas border that is nearly 200 miles west of San Antonio.”

The New York Times article also reported, citing Portland officials, that “The city has a large Congolese community, and has built a reputation as a place friendly to asylum seekers. It created the government-financed Portland Community Support Fund to provide rental payments to landlords and other forms of assistance for asylum seekers, the only fund of its kind in the country.”

“In the case of Central Africans, many of them are going to places where there are already Central African communities because they might have a distant relative or a friend or somebody who’s agreed to help them,” Aaron Reichlin-Melnick, a policy analyst for the American Immigration Council, told Maine Public Radio in a June 19 interview.

Reichlin-Melnick explained that people seeking asylum can either wait months in Mexico to cross the border at a port of entry and request asylum, or they can cross the border elsewhere and turn themselves in to the U.S. Border Patrol.

“For those who cross the border and ask for asylum from a Border Patrol officer to start the process, they are risking prosecution for illegal entry. So, in many ways, those seeking asylum at the border are faced with a really difficult decision: Wait for an indefinite period of time, potentially up to three or four months, in Mexico, and likely dangerous circumstances, or risk breaking the law and being charged with a crime by crossing the border and turning themselves in to the Border Patrol,” Reichlin-Melnick said. 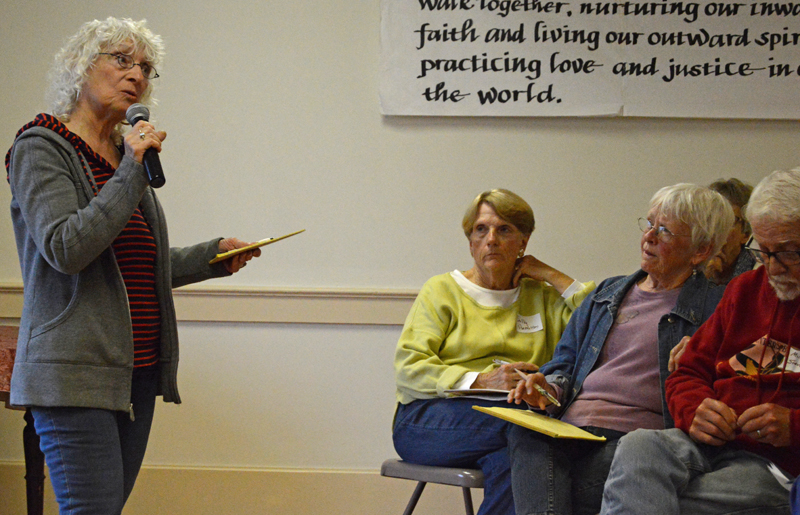 Mary Voskian, of Helping Hands for Immigrants, Refugees, and Asylum-Seekers, speaks to a crowd of nearly 50 people at The Second Congregational Church in Newcastle on Thursday, June 20. (Evan Houk photo)

Reichlin-Melnick did not know of a specific reason for the recent uptick in the arrival of asylum-seekers to Portland.

“I don’t know if anything has changed in recent weeks. To me, the most likely reason for more people coming is simply that more people arrived,” he told Maine Public Radio.

Maine Public Radio reported that members of the Angolan community in Maine say some of those seeking asylum may have left the country during the 2017 elections, fearing political persecution. Congolese asylum-seekers, meanwhile, have said they left violence resulting from ongoing civil wars in the Democratic Republic of the Congo.

After opening the meeting, Corbett passed the microphone around to each person in attendance so they could introduce themselves, say which organization they represent, and share information or ideas about how to help.

Most of the attendees expressed a desire to do something tangible and hands-on to help the situation, rather than just sending money to Portland or various organizations.

One of the groups represented was Helping Hands for Immigrants, Refugees, and Asylum-Seekers, formed two years ago in the Twin Villages area.

Mary Voskian, representing the group, spoke about its fundraising efforts. She said the group would collect cash contributions for the city of Portland outside Sherman’s Maine Coast Book Shop in Damariscotta on Saturdays, June 29 and July 6.

Sarah Foulger, pastor at The Congregational Church of Boothbay Harbor, stressed the importance of providing help with legal fees and legal representation for asylum-seekers. She said the church will host a benefit concert for the asylum-seekers Sunday, July 14, featuring singer-songwriter John Schindler.

“Denial of asylum claims is at an all-time high,” Foulger said.

She said 65% of asylum-seekers have their applications denied, while 90% of those without legal representation are denied.

“There is a wonderful group, (Immigrant Legal Advocacy Project), in the state of Maine that is based in Portland … so I think we need to be helping with legal expenses,” Foulger said.

“What we’ve learned is that the city of Portland is the place to send money if you want to have direct impact on the asylum-seekers who are currently here, so what Helping Hands is doing is right on target,” Fitz-Randolph said. “The second thing that we are encouraging our members and our churches to do is to make a contribution to (Immigrant Legal Advocacy Project) … to provide legal support.”

She went on to discuss the volunteer network the United Way is coordinating in Portland.

“There’s a form you need to fill out. You can share your own personal schedules, your own focus area. And so it’s a systematic way where you can get engaged immediately,” Fitz-Randolph said.

Peggy Schnack, assistant rector for children and youth at St. Paul’s Episcopal Church in Brunswick, volunteered to take any donated baby food with her to St. Luke’s food pantry in Portland, as she was making a trip to the city the next day.

The group collected $305 worth of baby food to send to Portland with Schnack.

The informal coalition has set another meeting for 2 p.m., Thursday, July 11 at The Second Congregational Church in Newcastle.