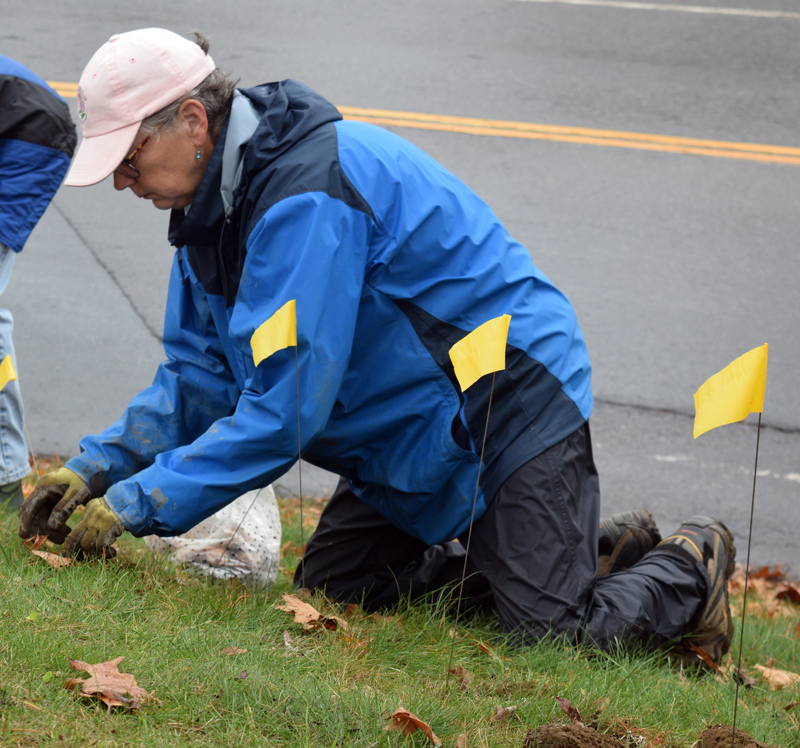 Lisa Freeman, one of the organizers, plants a daffodil bulb on the hill in front of the Lincoln County Courthouse in Wiscasset on Tuesday, Nov. 5, 100 years after the Maine Legislature’s vote in support of women’s suffrage. (Jessica Clifford photo)

“If we still didn’t have the right to vote, it sure would be a different country,” Beth Maxwell said, imagining what that country would look like while standing on the Wiscasset common Tuesday, Nov. 5.

Like others planting daffodils on the common on Election Day, Maxwell, president of The Garden Club of Wiscasset, was honoring the suffragists who fought for women’s right to vote.

The planting came 100 years to the day after the Maine Legislature ratified the 19th Amendment to the U.S. Constitution.

Many other towns and cities across the state joined in the Daffodil Tribute organized by the Maine Suffrage Centennial Collaborative, an organization working to commemorate the 100th anniversary of the 19th Amendment.

The organizers of the tribute in Wiscasset were Lisa Freeman, Terry Heller, and Betsy Kyle.

“I called Lisa and I said, ‘They are getting (together) a big daffodil tribute for the suffragettes and Portland thinks they are going to plant more daffodils than anybody and let’s get Wiscasset in on it,’” Heller said.

A total of 2,020 daffodil bulbs were planted in Wiscasset Tuesday to represent 100 years since national ratification of the 19th Amendment in 1920. The flowers will bloom in 2020, during the centennial.

“It means our predecessors, the women before us, worked hard, and it takes a village. In other words, they got together, and things can get accomplished when women work together,” Debbie Lorenson, of Westport Island, said.

According to the Maine Suffrage Centennial website, the Maine suffragists chose the daffodil as their flower symbol. Suffragists would bring daffodils to lobby legislators, hand them out at rallies, and ask supporters to wear them in their lapels.

When in bloom next spring, the daffodils will line the town common pathway that leads to the First Congregational Church and form a wavy line along the hill in front of the county courthouse.

Jan Whitfield, who was planting bulbs, said it is important to honor those who endured much for the suffrage movement. 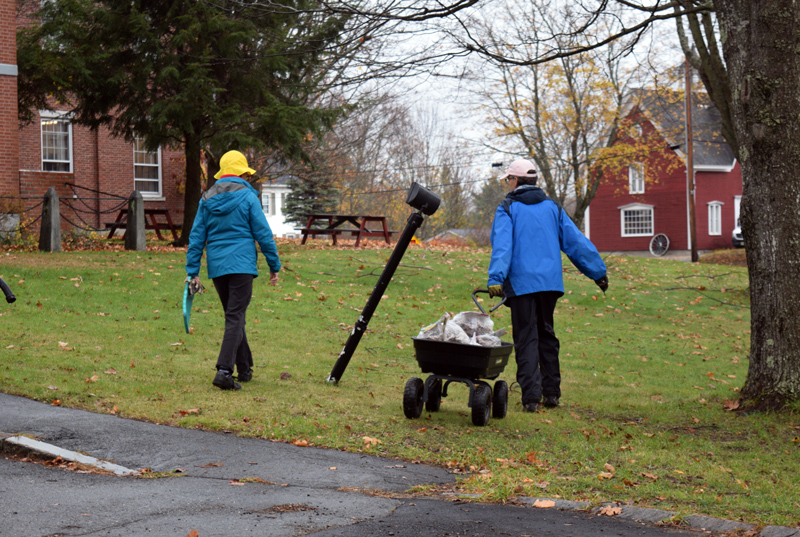 Volunteers walk across the courthouse lawn with a wagon to plant daffodil bulbs. (Jessica Clifford photo)

“I think we all probably take it for granted until we look at some of the history. … I know people went through being jailed and hunger strikes,” she said. “I don’t know how much we would be willing to do that today or not.”

According to the Maine Suffrage Centennial website, the suffrage movement in Maine was similar to the national campaign – made up of predominantly white, upper-class women.

Maine’s all-male Legislature repeatedly rejected measures to give women the right to vote.

In 1917, women succeeded in getting the question of suffrage on a referendum ballot. However, the referendum was overwhelmingly defeated, with only Auburn and Rockland voting in favor.

Two years later, in the spring of 1919, Congress sent the 19th Amendment to the U.S. Constitution to the states for ratification.

Anti-suffragists called for another referendum, while suffragists pushed for a special session before the referendum.

According to the National Park Service, then-Gov. Carl Milliken called a special session of the Legislature for Nov. 5, 1919.

By a narrow margin, the Legislature voted in favor of suffrage, making Maine the 19th state to ratify the 19th Amendment. 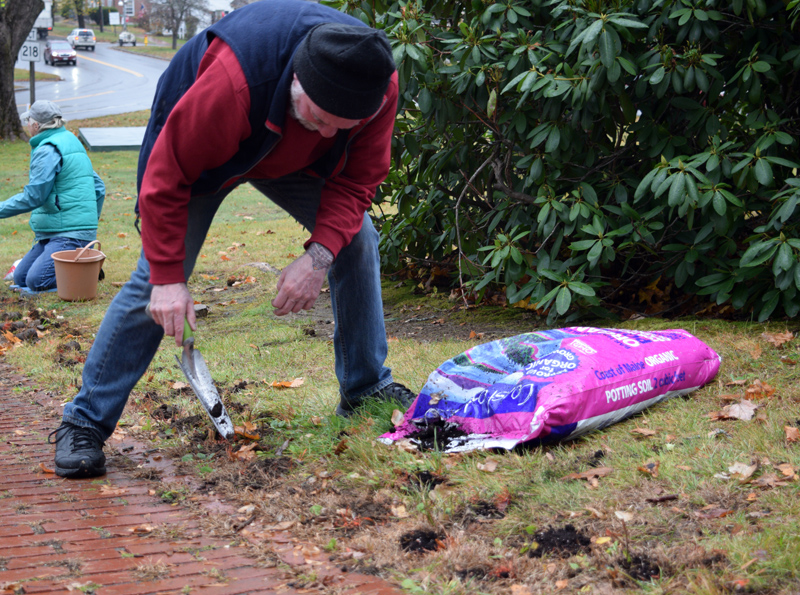 Wiscasset Selectman Ben Rines Jr. plants a daffodil bulb on the Wiscasset town common Tuesday, Nov. 5, as part of an effort to commemorate the 100th anniversary of women’s right to vote in America. (Jessica Clifford photo)

According to Heller, members of The Garden Club of Wiscasset and every single shopkeeper downtown gave money for the tribute.

“I knocked on every single door,” Heller said. “There was a smile and a contribution.”

About 35 people planted the bulbs. Both women and men participated, just as it took both sexes to succeed in adopting the 19th Amendment.

The volunteers planting daffodil bulbs in Wiscasset talked about ongoing progress for women’s equality in leadership roles and the workplace.

Heller connected the right to vote to having women in leadership roles.

Originally of Texas, Heller worked for 25 years in the Texas State Senate.

“It meant a lot that half of the senators were women, and they couldn’t have gotten there without the right to vote,” Heller said.

Women holding leadership positions is not always on the public’s mind, she said. 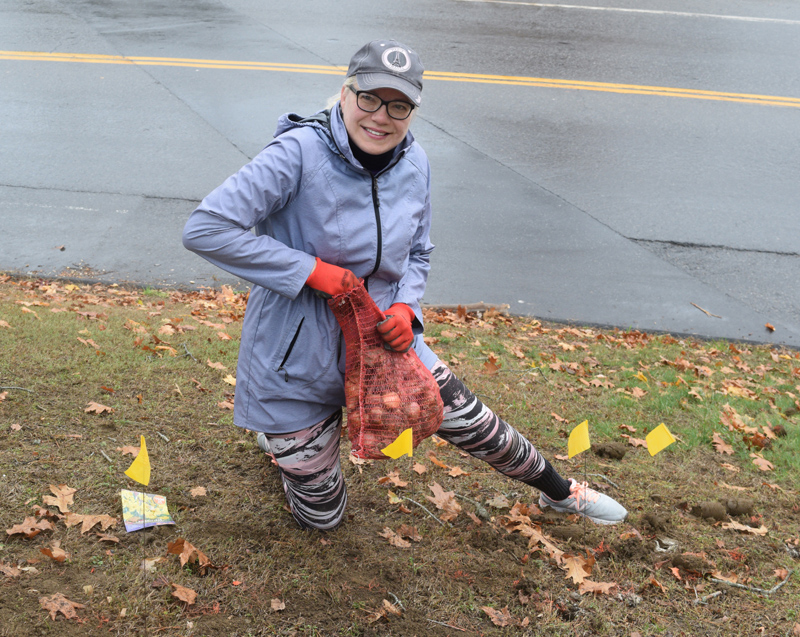 Michelle Wentworth, of Wiscasset, opens a bag of daffodil bulbs on the town common Tuesday, Nov. 5. About 35 people planted 2,020 bulbs on the common on the 100th anniversary of Maine’s ratification of the 19th Amendment to the U.S. Constitution. (Jessica Clifford photo)

“We don’t think about it, but we know how to appreciate it when we do, especially when we have women leading in elected offices,” Heller said.

Gov. Janet Mills – Maine’s first female governor – “is a light for every little girl in this state, and we got here only because we gained the right to vote 100 years ago,” Heller said.

“I have seen in my lifetime a change in the workplace,” Christine Hopf-Lovette, of Wiscasset, said. The fight for equality, however, is “a never-ending task,” she added later.

Hopf-Lovette said she gave up one of her first career interests after finding out there was no way to move into the position she wanted because it was only available for men.

“I’m sorry when I look back on it that I never challenged that, but I’m glad other people did,” Hopf-Lovette said.

“I think it’s really important to show the community that we support our women in all areas,” she said.

Those participating in the tribute said they would remember the 19th Amendment’s anniversary during the 2020 election and they want others to do so as well.

“I just want young people to be aware of how important it is to vote, and whatever we can do as a reminder to get them more involved is very important,” Hopf-Lovette said.

“Every election is important, and everybody has a voice,” Heller said. “It couldn’t be more important coming up.”