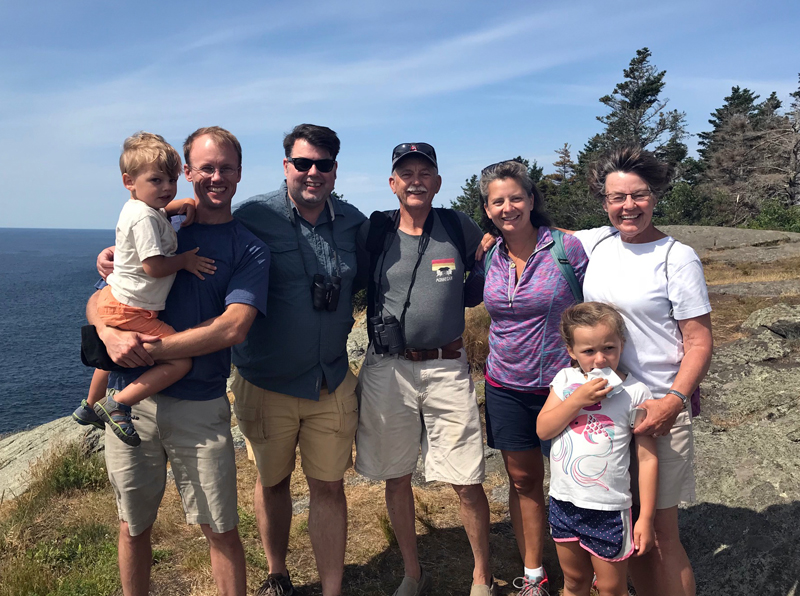 Friends and family remembered Kenneth “Ken” Lutte as a fun-loving and witty man who had a passion for learning and the natural world.

Lutte, a New Harbor resident since the early 1970s, died on April 26 at the age of 75 after over a year battling amyotrophic lateral sclerosis, also known as Lou Gehrig’s disease.

His wife, Pamela “Pam” Lutte, said it was her husband’s wit and sense of humor that first drew her to him when they were attending Bowdoin College in the late 1960s.

“That’s why he was such a good teacher,” Pam Lutte said. “I think he could relate to the kids quite well.”

“He was very witty, he had an answer to everything,” she said.

The two hit it off instantly, marrying before Ken Lutte even graduated from Bowdoin.

“Love kept us together for 53 years. We couldn’t imagine being with anyone else,” Pam Lutte said.

The two soon moved to New Harbor, where they settled down. “We’d see a couple houses that we liked and I’d say, ‘no, I need to be closer to the ocean,” Pam Lutte said.

She said her and her husband have always loved the “beautiful” town of Bristol, particularly the beach and the tight-knit community.

“It hasn’t changed much in the 50 years that we’ve lived here,” Pam Lutte said.

Pam Lutte and one of the couple’s two sons, Mark Lutte, both remember Ken Lutte as an invested family man, always spending time playing with his kids.

“He was always one to be right there with my brother Tom and I,” Mark Lutte said.

The family has a field at its New Harbor home where the kids would gather to play baseball or football. Pam Lutte said some of her sons’ friends would even come to the door sometimes and ask “Can Mr. Lutte come out to play today?”

Mark and Tom Lutte both attended Lincoln Academy, where Ken Lutte taught for his entire teaching career of 35 years. He mostly taught biology and then algebra in his later years.

Mark Lutte remembers meeting his wife, Sarah (Devala) Lutte, at the Newcastle school, where she had Ken Lutte as a class advisor.

“She actually met dad before she met me,” Mark Lutte said with a laugh.

Sarah and Mark Lutte were in an optics class together, a new elective course teaching the study of light, and he remembers Ken Lutte joking to him that he was always only one chapter ahead of the students.

“I remember him telling me one time that he had more fun talking to kids than talking to adults,” Mark Lutte said.

Mark Lutte remembers his dad as always laughing and joking around, having a passion for watching sports games, and being active and outside.

He remembers fishing trips that the LA teachers would go on together.

Bryan Manahan, the head of the English department at LA, became a part-time teacher in 1999 at the beginning of his career, right when Ken Lutte began working part time towards the end of his own career.

“He and I shared an advisory together, we shared the Outing Club, and we shared a great friendship,” Manahan said.

Ken Lutte advised the Outing Club, which takes LA students on rafting or hiking trips, for over 20 years, Manahan said.

Ken Lutte also organized the Earth Day field trips each year, when all the more than 500 students at LA went on a different environmentally themed field trip, such as hiking Dodge Point Public Land in Newcastle or running a recycling program.

Manahan also talked about painting with Ken Lutte in the summers. He also worked as an accountant for H&R Block. “He had such capital in the community,” Manahan said.

Pam Lutte said her husband seemed to know everyone from painting houses and that he always liked to stay active and involved, even when the ALS seriously began to hamper that a little over a year ago.

Mark Lutte said he thought his father was a perfect role model for kids. When asked what made his father tick, he choked up remembering a quote from Mahatma Gandhi that his father had tacked up on the wall where they liked to play billiards: “Whatever you do will be insignificant, but it’s very important that you do it.”

He said that he thinks that was his father’s philosophy, believing that one person can really make a difference. “That’s how he lived his life,” Mark Lutte said.

A public memorial service will be held, rain or shine, Friday, May 27 at 2 p.m. on the grounds of the Pemaquid Point Lighthouse Park, a special local spot for Pam and Ken Lutte.