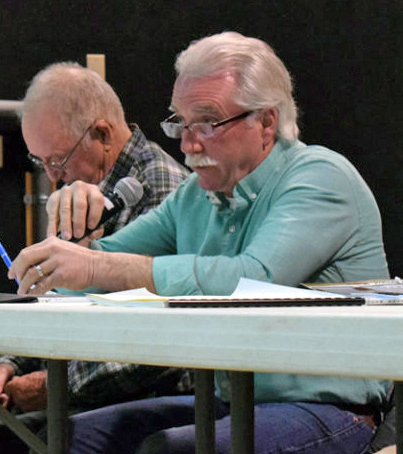 South Bristol Select board member Ken Lincoln answers a question at annual town meeting in March 2020. Lincoln resigned from the board on Jan. 5, one year before his term would have expired, to spend more time with family, he said. (Evan Houk photo, LCN file)

Longtime South Bristol Select Board member and board chair Ken Lincoln resigned at the end of a board meeting on Thursday, Jan. 5.

At nearly 63-years-old, Lincoln looks forward to spending more time with his wife, who is retired, and traveling in the wintertime, he said in a phone interview on Monday, Jan. 23.

“I’m not retiring completely, but we’d like to think we can get away for four to six weeks in the winter,” Lincoln said. “You can’t do that if you’re married to that office.”

He said that he resigned in an executive session of the board and can’t share any of that information.

Lincoln is a lifelong South Bristol resident and worked as a contractor, specializing in carpentry, since shortly after graduating from Lincoln Academy. He said he can’t retire yet even if he wanted to, because his business is booked out until 2025.

“Since the pandemic, it just exploded,” Lincoln said of his business, where he mostly works on residential homes and remodeling.

Lincoln was first elected to the select board in 1995, after serving on the budget committee for one year, and has served continuously since then. He had one year remaining on his term but decided to call it quits early.

“I got away a year early,” Lincoln said.

During annual town meeting one year, he saw one of the select board members, Joe Wilcock, fall asleep on stage. This inspired him to run for the board himself.

“So I said ‘ahh, we need some younger people,’” Lincoln said.

Lincoln said he has seen many changes in the town over the years. Although the population has held fairly steady at about 900 year-round and 3,000 summertime residents, Lincoln said the size and cost of the homes on the South Bristol coastline have increased. Access to the water for the public has also decreased along with it, with fences and “no trespassing” signs being erected.

He said this trend has been happening for about 20 years, but really took off after the COVID-19 pandemic hit in March 2020.

Lincoln has worked to keep the tax rate low and provide for the South Bristol School, among other duties, he said.

“I’ve seen a lot of things over the last 30 years, a new library, new gymnasium at the school, new town hall, Eugley Landing,” Lincoln said. “We’ve done a lot of good things for the town in the last 30 years.”

The Ann Wilder Stratton fund was gifted to the town about 15 years ago, Lincoln said. It has been invested wisely and continues to grow, he said. The select board has used the funds to provide for maintenance needs at South Bristol School and construct Eugley Landing.

Lincoln is also the president of the Thompson Ice House Preservation Corp., and coordinates the annual ice harvest in February at the Thompson Pond. He said he hopes some colder weather comes soon so the ice can freeze to a thicker depth.

Lincoln grew up near the pond and used to skate there and worked for someone who cut ice commercially for a few years.

Once the ice house was donated to the Thompson Ice House Preservation Corp., Lincoln cut ice for them for a time before becoming president himself.

“You wear quite a few different hats in the selectmen’s office,” Lincoln said of the select board. “You pretty much blanket the entire community.”

The South Bristol Select Board will likely discuss how to fill Lincoln’s position at its meeting at 6 p.m. on Thursday, Jan. 26, according to Town Clerk Brenda Bartlett.