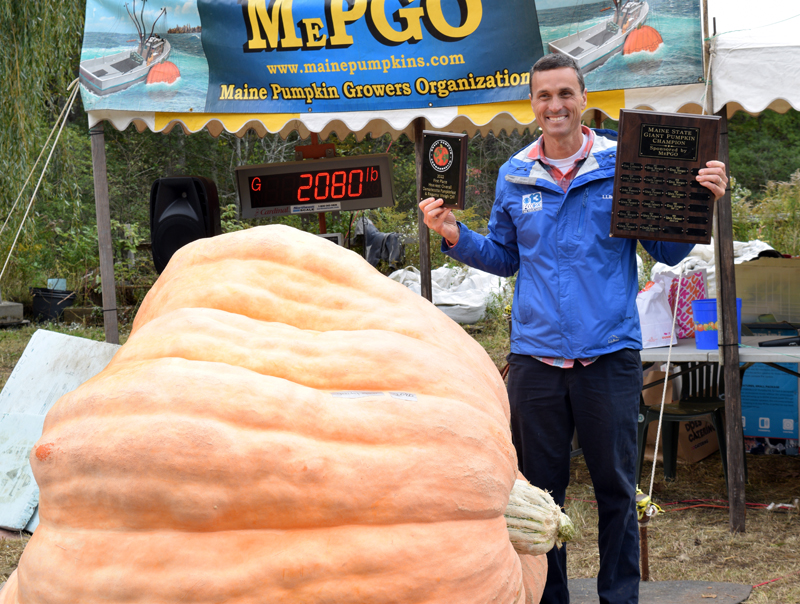 Charlie Lopresti, WGME chief meteorologist and master of ceremonies for the Damariscotta Pumpkinfest & Regatta weigh-off, stands in front of his first place 2,080-pound giant pumpkin after the event on Sunday, Oct. 2. The average weight of the top 10 giant pumpkins was 1,547 pounds, up from last year, according to Pumpkinfest co-founder Bill Clark. (Evan Houk photo)

The master of ceremonies for the 2022 Damariscotta Pumpkinfest & Regatta weigh-off, WGME Chief Meteorologist Charlie Lopresti, took the top prize this year with a 2,080-pound light orange fruit on Sunday, Oct. 2.

The weigh-off was held at Pinkham’s Plantation in Damariscotta to a crowd of about 50 people on a chilly autumn morning. Green squashes and orange and white pumpkins were weighed and a long gourd was measured in attempts by growers to set state records.

No state records were set this year in Damariscotta. Edwin Pierpont, of Jefferson, took second place with a large white pumpkin weighing in at 2,074 pounds.

Damariscotta Pumpkinfest & Regatta co-founder Bill Clark built the suspense for the final weigh-off with both pumpkins on each of the two scales with their displays covered. He asked the crowd to cheer for which pumpkin they thought was the heaviest.

“I think the weatherman got more applause,” Clark said.

Richard Powell, of Nobleboro, came in fifth place with a pumpkin weighing 1,646 pounds. He said he drove out of his way to get the female seed from Edwin Pierpont’s state record-setting fruit in order to pollinate his pumpkin, which Lopresti called “world class genetics.” Powell crossed the seed with a male flower from another record-setting batch of genetics to pollinate the pumpkin.

Pierpont mentioned one of his tricks to keep the sun off of the pumpkins and help them grow — putting a comforter over the fruit.

Lopresti foreshadowed the upcoming weekend’s regatta to be held on Sunday, Oct. 9, saying that Tom Lishness, who races in the regatta as “the gnome,” was scouting for a pumpkin boat.

“Tom (Lishness) looks for the pumpkin that is most seaworthy,” Lopresti said.

Morgan also measured two long gourds, one at 143.625 inches that would have broken Morgan’s state record set last year. Clark explained that because the gourd was soft and had a black spot on its end, it would not qualify for the state record. Morgan’s other gourd measured 134 inches.

Morgan explained to Lopresti that the gourd grows up using a long wooden structure as a supportive base, and the flower opens up when the sun comes out.

Matt Holmes, of Limington, claimed the prize for heaviest green squash at 804 pounds, which he said was a new personal best for him.

The weigh-off for the youth and for Pumpkinfest volunteers was held on Saturday, Oct. 1 at Pinkham’s Plantation.