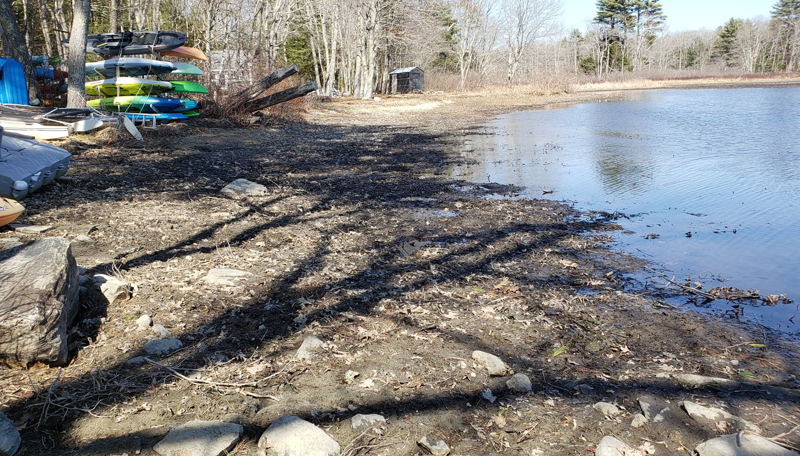 The shore of Damariscotta Lake near Moody’s Island on March 23. Lakefront property owner Rebecca Waddell said the water level has come up in the past week from rain, but it is still 1 or 2 feet below its normal level. (Photo courtesy Rebecca Waddell)

Damariscotta Lake property owners are expressing concern about what they describe as unusually low water levels, but a Nobleboro town official says the lowering is a “natural occurrence” and spring rains are already raising the level.

Some lakefront property owners have reported a water level lower than they have ever seen in the past week, according to Rebecca Waddell, a Waldoboro resident who owns a camp on the lake.

A handful of pictures and comments about the unusually low level of the lake’s water were posted to the Jefferson Community Board on Facebook last week.

Nease said that Midcoast Conservancy has been in touch with landowners and the operators of the dam at Damariscotta Mills and she said the dam was shut last week.

According to Nobleboro Selectman and Newcastle-Nobleboro Fish Committee member Richard Powell, the Canadian company Kruger Energy International owns the power station at Damariscotta Mills and is permitted to generate electricity by running water through the dam there, as long as a certain lake level is maintained.

Powell said by phone on Tuesday that Kruger shut off the powerhouse last week, before the lake level fell below the level stipulated by the company’s Federal Energy Regulatory Commission permit.

“They did what they are supposed to do,” Powell said. 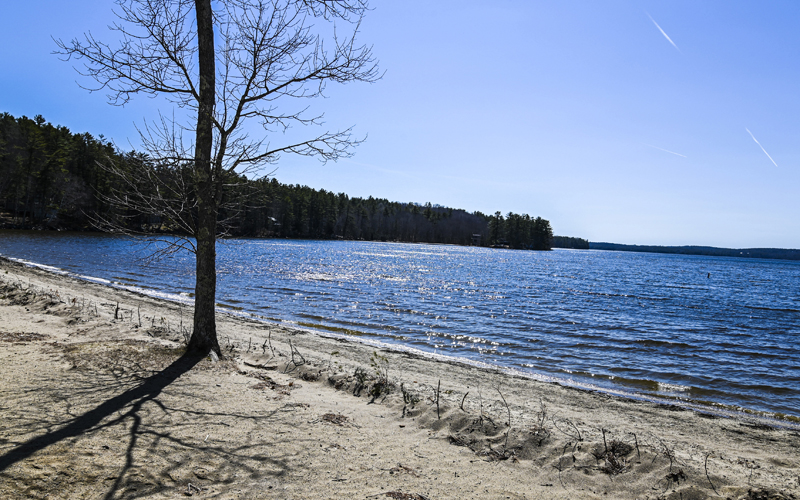 A view from the beach at Damariscotta Lake State Park in Jefferson shows the lake’s water level Tuesday, March 30. Lakefront property owners have expressed concerned about the water level, but it rose somewhat with weekend rain. (Bisi Cameron Yee photo)

Paule Veilleux-Turcotte, a spokesperson for Kruger Energy International, confirmed this by email on Wednesday, March 31, saying the dam was shut off on Thursday, March 25 and that the company has been operating within its “rule curve.”

Veilleux-Turcotte said Kruger Energy is only allowed to run the dam when the water level is between 6.5 and 8.5 feet. After April 1, Kruger cannot operate under 8.5 feet until Dec. 1.

The water level is measured in the Mill Pond at Damariscotta Mills. Powell said that when he looked at it last week it may have been “just a hair” under the 6.5 feet stipulated for operation from Jan. 1 to March 31. The lake level must rise to 8.5 feet by May 1, according to the agreement.

Powell said that Kruger Energy only operates the powerhouse from December until around April 15, when sea-run smelt begin travelling up the fish ladder. He said the company does not run the dam during alewife season either.

Powell said that the stipulations Kruger operates under were made with input from the Newcastle-Nobleboro Fish Committee, state agencies, and federal agencies to ensure an adequate water level for a successful alewife run.

“The levels are necessary for the alewives to get up in the lake to find spawning beds and return,” Powell said.

“Kruger Energy has the responsibility to manage the lake level to avoid flooding during the spring runoff, and this can happen very quickly,” Veilleux-Turcotte wrote. “There is also a minimum flow that is required for fish passage that is a condition of our license.” 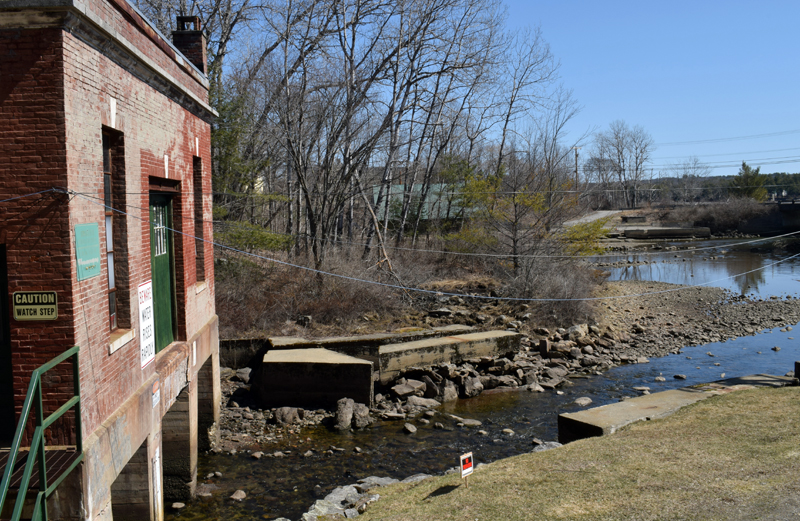 A view of the power station at Damariscotta Mills on Tuesday, March 30. Kruger Energy International operates the station and produces electricity with the release of water through a nearby dam. (Evan Houk photo)

Powell said that with the rain over the weekend, the lake level is up to 7 feet, and he expects it to gradually increase as the area gets more moisture.

“The rain forecasted in the next few days should bring the lake level back up,” Veilleux-Turcotte wrote.

Powell said the lowering of the water level is something that happens every year and that Kruger Energy has been a good partner to the towns of Newcastle and Nobleboro in controlling the levels of Damariscotta Lake.

“The thing people have to understand is that it’s going to be a normal occurrence and we’re fortunate that they work with us as well as they do,” Powell said.

Powell said that more people may have noticed the low lake level this year because of a lack of moisture during the winter and spring.

Nease said there is not much the Conservancy can do, but it is keeping an eye on the water level of the Damariscotta Lake. She also said the measurement is now up to 7 feet and she expects it to rise more with rain expected this week.

Karen Prock, who has owned a camp on Damariscotta Lake about 2 miles from her home in Jefferson for seven years, said by phone on Tuesday that the water level is the lowest she has ever seen it and is worried about lakefront property owners being able to put in their docks.

Prock is also concerned about boaters hitting rocks that are normally deeper underwater.

She said that the water level is still about 3-4 feet lower than normal and even lower than when she and her husband leave their camp in December.

“We’re not going to get enough rain to bring it back up,” Prock said.