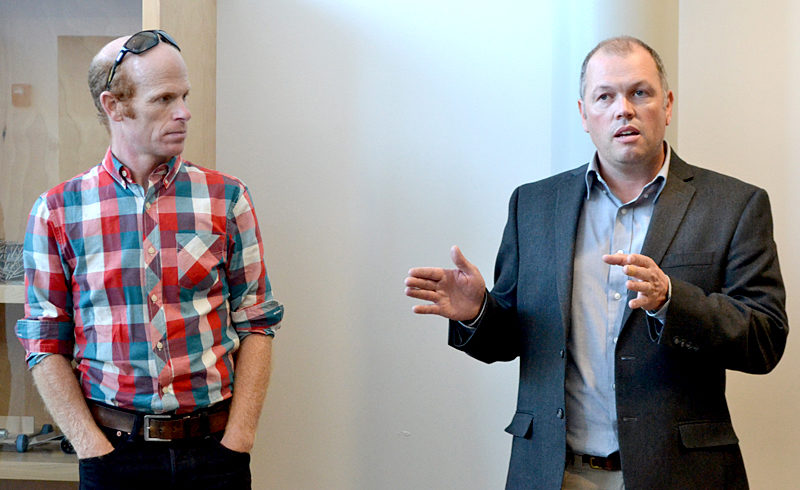 Tor Glendinning (right), principal architect at 44 Degrees North LLC in Newcastle, explains some of the details of Lincoln Academy’s Cable-Burns Applied Technology and Engineering Center while Jesse Thompson, principal architect at Thompson Kaplan Architects, looks on. Thompson is on the board of directors for the Maine chapter of the American Institute of Architects, which toured the ATEC building Thursday, Sept. 15. (Maia Zewert photo)

Members of the Maine chapter of the American Institute of Architects visited the Lincoln Academy campus Thursday, Sept. 15 for a tour of the Cable-Burns Applied Technology and Engineering Center.

Each year, members of the chapter tour a couple of buildings around the state that the organization recognizes for their importance in terms of both design and the building’s place in the community, according to Tor Glendinning, principal architect at 44 Degrees North LLC in Newcastle.

Glendinning graduated from Lincoln Academy in 1990. He designed both the ATEC building and the academy’s new dormitory.

The 10,300-square-foot ATEC building houses programs in science, technology, engineering, mathematics, and the arts. Courses are also offered to the community after school and during the weekend.

The three-story dormitory has an approximately 10,000-square-foot footprint. The building houses students from around the world who are attending the academy.

One of the members of the American Institute of Architects’ Maine chapter contacted Glendinning back in the spring to talk about arranging a tour of the ATEC building. The Maine chapter also recently visited the Capital Judicial Center in Augusta as well as the Center for Maine Contemporary Art in Rockland, Glendinning said.

“The fact that Lincoln Academy gets put into a list of buildings like those is remarkable,” Glendinning said.

“Back when I was in school I was thinking about architects and the grander profession. When you’re 18, they seem like rock stars. You’re asking how to become one of these guys or women, and before you know it, you’re being recognized by the people who were your inspiration. It feels pretty special to have colleagues and peers in my profession recognize the work.”

One of the features of the ATEC building that make it unique is its geothermal heating and cooling system. The building is tucked into a hillside, which reduces the site’s footprint and the amount of energy needed to heat or cool the building, Glendinning said.

“The tech center is supposed to be cutting edge, and this is a good example of what buildings could be in the future,” Glendinning said.

Matt Goetting, Lincoln Academy’s associate head for external affairs, and Maya Crosby, the school’s director of innovation and technology, both spoke to the tour group about the school’s use of the building. One of the school’s goals is to have every student take at least one class in the ATEC center during his or her time at Lincoln Academy.

“According to Maya and Matt, the building is satisfying their curriculum and it’s really working for them,” Glendinning said. “The spaces are big enough they can move equipment around and adapt the spaces to what they’re teaching.”

After the tour of the ATEC building, Glendinning took the visitors through the dormitory.

From left: Lincoln Academy Director of Innovation and Technology Maya Crosby points out a feature of a classroom in the Cable-Burns Applied Technology and Engineering Center to Daniel Burne and Alexander Wheelock, both of Becker Structural Engineers and members of the Maine chapter of the American Institute of Architects, Thursday, Sept. 15. (Maia Zewert photo)