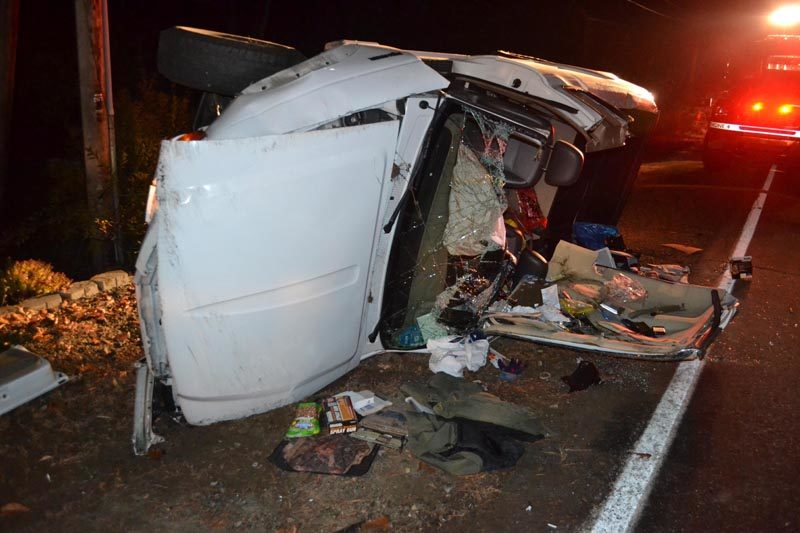 A Ford Ranger was totaled in a single-vehicle accident on Route 129 in South Bristol the evening of Monday, Nov. 14. The driver, Kenneth Chasse, 57, of South Bristol, was the sole occupant of the vehicle, according to Lincoln County Sheriff’s Deputy Aaron Beck. (Maia Zewert photo)

A South Bristol man is in serious condition at Maine Medical Center in Portland and faces a charge of operating under the influence after a single-vehicle accident on Route 129 in South Bristol the evening of Monday, Nov. 14.

Kenneth Chasse, 57, was driving a 2004 Ford Ranger south on Route 129 near Pine Bluff Lane, according to Lincoln County Sheriff’s Deputy Aaron Beck. Chasse was the sole occupant of the vehicle.

Chasse was speeding when he entered a curve, according to a press release from the Lincoln County Sheriff’s Office. The vehicle entered the dirt shoulder on the southbound side. Chasse overcorrected, causing the vehicle to skid.

The vehicle crossed the centerline, left the road, and went into the northbound ditch, where it struck a large rock and overturned. The vehicle came to rest in the northbound shoulder on the driver’s side, facing north, Beck said.

The South Bristol Fire Department extricated Chasse from the vehicle in less than 10 minutes. Route 129 was closed until the fire department cleared the scene at 11:44 p.m.

The Central Lincoln County Ambulance Service transported Chasse to LincolnHealth – Miles Campus with unknown injuries, Beck said. Chasse was later taken to Maine Medical Center, where he is in serious condition, according to hospital personnel.

It is unknown if Chasse was wearing his seat belt at the time of the accident, Beck said. The airbags in the vehicle deployed and the vehicle was totaled.