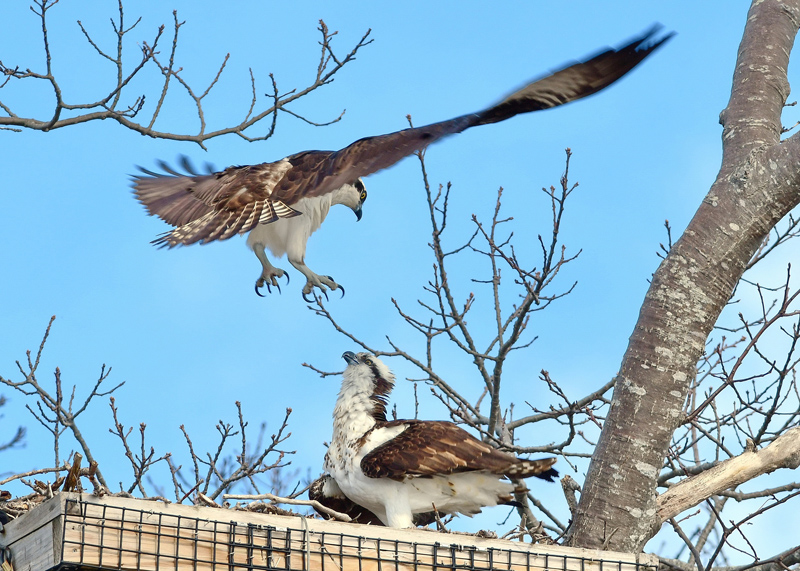 A man-made osprey nest on the Salt Pond Road in New Harbor has served as a beloved nesting spot for mated ospreys for the past three years.

The nest, made out of plywood and lobster trap wire, replaced the natural nest built by the first pair of mated ospreys to come to Salt Pond Road in 2011. The pair built their nest on the chimney of an empty house on Salt Pond Road and returned to their nest every year on April 8. Over the years, Shirley and Bill Silverberg, the next-door neighbors, grew attached to following the ospreys each summer.

“The ospreys brought my husband and I close to the peaceful beauty of Maine,” said Shirley Silverberg. “I’ve held the ospreys very close to my heart.”

“Every summer when my parents would come up from New York, they would look forward to watching the ospreys from their bedroom window,” said their son, Peter Silverberg. “I can picture my dad studying the ospreys through his binoculars,”

When the house was purchased in 2017, the chimney was closed, and the osprey nest removed.

“We looked at our property and we thought we need to rebuild a nest for the ospreys to return to,” said Shirley Silverberg.

The Silverbergs asked Sherrie Tucker, a year-round resident of Salt Pond Road and wildlife photographer who has followed the ospreys since 2011, to find a local arborist to rebuild the nest. Tucker contacted Shannon Mahan, owner of MAC Tree Service in New Harbor.

“Typically, I just remove trees and clear brush around people’s property,” said Mahan. “I’ve rescued cats out of trees before, but nothing like this.” 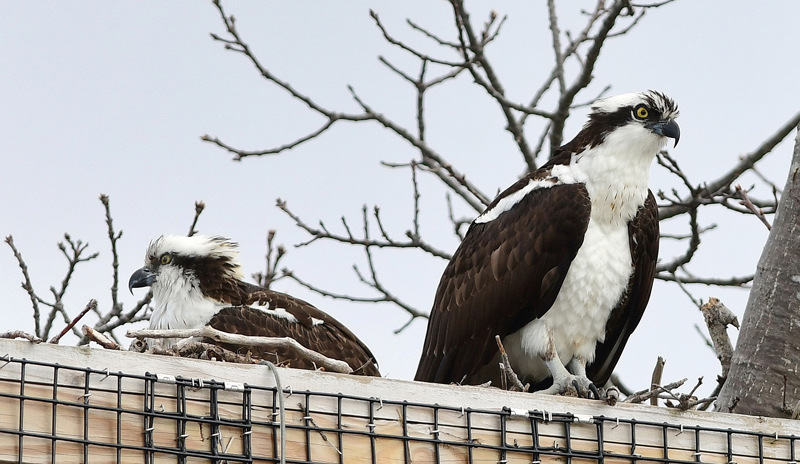 The pair of mated ospreys looks out in the man-made nest on Salt Pond Road in New Harbor. The nest, built by Shannon Mahan, has provided a home for mated ospreys for the past three years. (Photo courtesy Sherrie Tucker)

Man-made osprey nests have become increasingly popular throughout the state of Maine, particularly along the coastline. Lifelong birder Don Reimer said many people are building osprey nests on their coastal properties to share their natural environment with the birds.

It took Mahan several days to rebuild the nest with materials he had on hand. He built the base using a 4-foot-by-4-foot platform of pressure-treated lumber and lobster trap wire, and filled the inside of the nest with tree branches and sticks.

In a lift 55 feet up in the air, Mahan spent several hours trimming the branches of a tree before hoisting the nest up onto the tree.

“Ospreys are extremely adaptable to nesting locations, so if people put up a deterrent to prevent the ospreys from nesting, the ospreys will build their nests in a nearby area,” Call said. “They’re not shy about building nests very close to people’s homes, and on public property.”

Shirley Silverberg described the first year as exciting and suspenseful as they waited to discover if the ospreys would settle into their remade nest.

“Sure enough they returned on their scheduled day, April 8,” Shirley Silverberg said.

Mahan inspects the nest before the ospreys arrive every year.

“Over the years, the ospreys have rearranged the nest into a fairly flat shape. It’s not your average bowl-shaped nest,” said Mahan.

Call said ospreys have very productive nesting behaviors. They build their nests out of sticks and line the nest with bark, sod, and grassy materials. The ospreys create their own natural substrates, which regulate the temperature of their eggs and encourage drainage of waste.

Other birds, such as the peregrine falcon and owls, prefer to nest in osprey nests because of their durability, Call said. 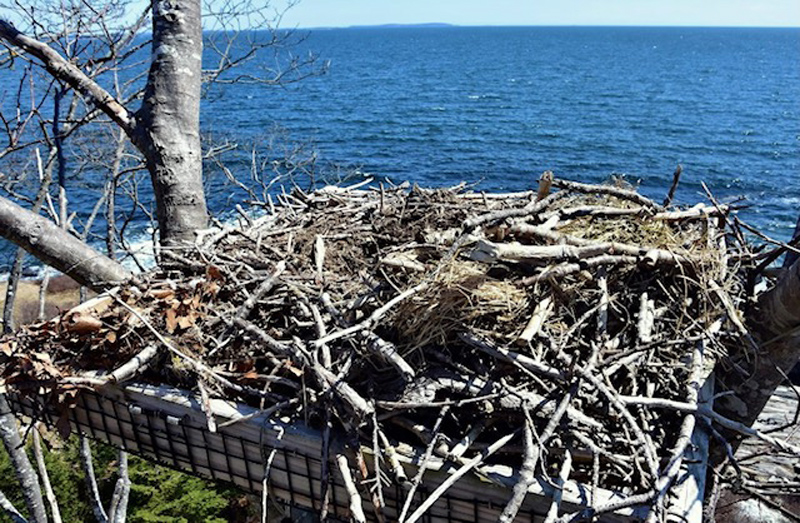 The osprey nest built by Shanon Mahan on the Salt Pond Road in New Harbor has served as the home for mated ospreys for the past three years. (Photo courtesy Sherrie Tucker)

The remade nest sits higher in the tree than the natural one, making it more visible from the window of the Silverberg home.

This year marked the first year that the original female returned without her male partner.

“She sat in the nest crying for nine days straight,” said Tucker.

On April 18, just hours after the female left her nest with no sign of her partner arriving, a younger pair of ospreys flew in.

“We were delighted to hear that a new pair found the nest,” said Shirley Silverberg. “They’re younger, so hopefully they’ll return for many years.”

Since the ospreys first started coming to Salt Pond Road in 2011, Tucker has done tons of research and posted about osprey updates to her Facebook page.

“It’s been fun to follow the pairs of osprey directly from my porch, and gather a following on Facebook,” said Tucker. “Last year, I witnessed the male stay behind until the end of September, because one chick couldn’t fish yet. When the male finally left, the chick cried for a week straight before departing.”

“I’ve never seen the parents depart together, but they stay mated for life,” Tucker said.

This year, the new pair has been mating regularly, but the female has been late to drop her eggs, Tucker explained.

“I’m not sure what will come of this new pair, but we are so happy to see ospreys return to Salt Pond Road,” said Tucker.

“I was saddened to hear that the original pair didn’t return together, but the younger couple reminds me that the cycle of nature continues,” Shirley Silverberg said. “It’s a sweet testament to optimism.”