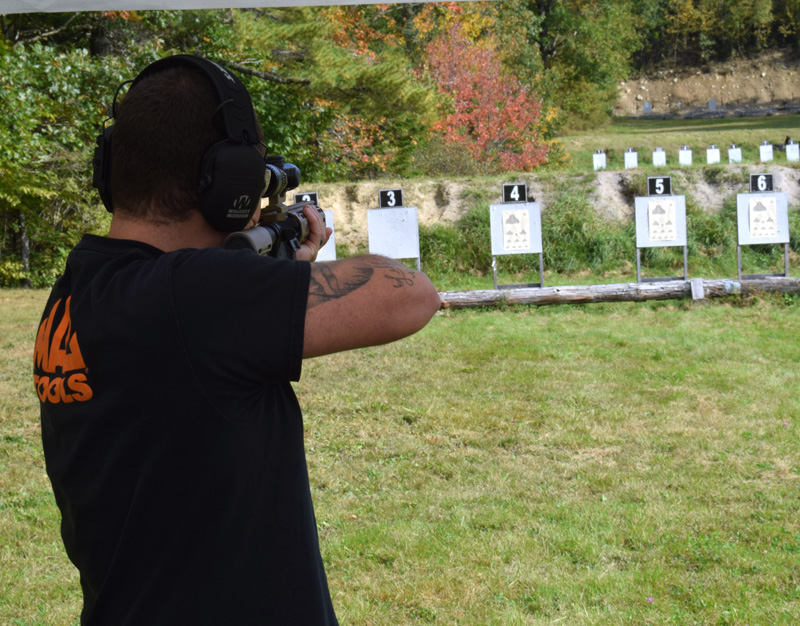 Conner Yurko, of Wiscasset, sites in a target during the first Project Appleseed event held in Midcoast Maine, at the Lincoln County Rifle Club in Damariscotta on Oct. 9. Yurko works at Atlantic Motorcar Center in Wiscasset and attended the event with seven of his co-workers and owner of the business, Bruce Howes. (Evan Houk photo)

Project Appleseed, a national nonprofit that teaches rifle marksmanship and its importance in American history, held its first event in Midcoast Maine at the Lincoln County Rifle Club in Damariscotta on Saturday and Sunday, Oct. 9 and 10.

Twelve people received training in four types of timed shootings from different positions: Standing, standing to sitting or kneeling, standing to prone, and prone. Each attendee brought their own rifle to use.

At the end of each training, attendees were tested and received a rifleman patch from Project Appleseed if they passed.

Bruce Howes, owner of Atlantic Motorcar Center in Wiscasset, has attended Project Appleseed events since 2012 and was able to organize the first such event in Lincoln County. Seven of his employees attended.

Howes explained how it is a part of our American heritage to learn about natural rights and privileges and how the government was set up in this country to protect those rights for its citizens.

In addition to marksmanship training, American history that focused on the “three strikes of the match” that ignited the Revolutionary War on April 19, 1775, was taught, stressing the importance of marksmanship in the founding of the United States.

“It’s a fun event to get out to on a Saturday,” participant and Atlantic Motorcar employee Conner Yurko, of Wiscasset, said at the event.

Yurko had the loudest and seemingly most powerful rifle at the event, a 7.62-by-39 millimeter AR-15 platform. Hearing and eye protection was required at all times during the shooting drills.

Instructor Steve Lundeen, who made the trip from Georgia for the event, said that safety is paramount and is taught first to put everyone on the same page.

He said Project Appleseed is a completely volunteer-run nonprofit organization that seeks to revive the art of rifle marksmanship and teach its importance in American history. All the training and shooting drills are based on those used by the U.S. Army.

Project Appleseed events are family-friendly and he enjoys instructing the junior shooters in marksmanship.

Howes hopes to organize another Project Appleseed event in the spring, possibly as an open house for the community to visit the Lincoln County Rifle Club, located in the back of Camden National Plaza at 435 Main St. in Damariscotta.