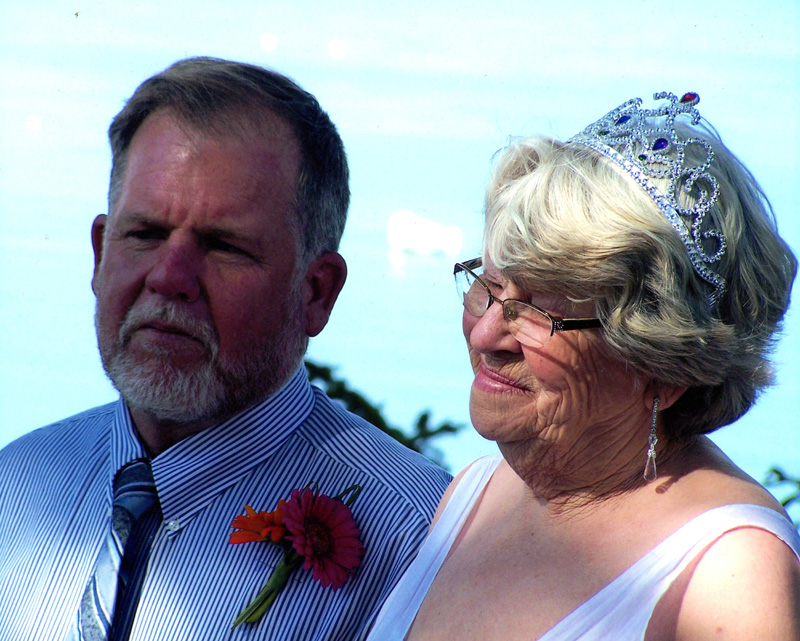 Martha Brackett and her widower Mark Wilson on their wedding day in 2008. Brackett died on Aug. 11. She worked in several different restaurants in the area, earning high praise from locals and visiting celebrities alike. (Photo courtesy Mark Wilson)

“The Taste of Maine restaurant is in Woolwich, but the best cooking in Maine was by Martha Brackett,” The Rev. Bobby Ives raved by phone on Tuesday, Oct. 5.

He said she will be sorely missed, not only for her cooking, but for her warm, welcoming, and humorous spirit. “I’m going to miss her, she was a special person.”

Ives said her fish stew was the best he ever had. For big occasions in the area, everyone always turned to Martha Brackett for the food, such as The Carpenter’s Boat Shop anniversary banquet.

Martha Brackett died at the age of 87 on Aug. 11 with her husband by her side, after a long illness.

Her husband, Mark Wilson, said during a phone interview that there were also many famous faces that praised Martha’s cooking and came back for more, including former U.S. Senator Ted Kennedy and his family.

During her career, Brackett worked at Backstreet Landing, The Samoset Restaurant, The Restoration, the Bristol Diner, Fisherman’s Wharf in Boothbay Harbor, the Taste of Orient in Wiscasset, the Pemaquid Chart House, as well as restaurants in Florida. She also would cater for the Lion’s Club, The Carpenters Boat Shop, and other local organizations.

He said the Kennedys also loved the New England fish chowder and Ted would send the chowder and Martha’s donuts back home to his mother, he liked them so much.

Wilson said the Kennedys would eat at the Restoration where Martha worked and the Pemaquid Chart House, which Martha ran from 1985 to 1992.

Martha was born and raised in Dresden, one of 11 kids. She got her start cooking early and stuck with it all her life. She graduated from Bridge Academy in Dresden in 1951.

Wilson said she was a natural who taught him how to cook difficult breakfast items, lunches, and soups.

“She could do it out of her head, she never needed a recipe,” Wilson said.

The first meal they cooked together was baked stuffed peppers with rice and ground beef.

“I let her cook and I did the dishes,” Wilson said.

Wilson provided a stack of thank you notes that describe Martha as very kind and as an excellent cook.

Wilson and Brackett met in 1979 on April Fool’s Day in the Kiki Lounge in West Palm Beach, Fla. Brackett worked at different restaurants in Florida cooking conch fritters, shark, and alligator tail, among other things.

She was then recruited to run the Conchy Joe’s Seafood Restaurant in Florida, where she earned praise for her cooking from one of her favorite musicians, John Denver.

Wilson said a lot of famous people used to frequent Conchy Joe’s in the 1980s. Martha came out of the kitchen to meet Denver and noted that he was very friendly and signed an autograph for her.

Brackett and Wilson then returned to Maine where Martha opened the Pemaquid Chart House.

Around the year 2000, at Fisherman’s Wharf, Brackett cooked a breakfast of eggs Nova Scotia for Julia Child and earned a compliment from the famous cooking teacher. Wilson described the meal as a complicated and delicate dish that includes duck salmon and a poached egg with cream cheese sauce.

From 1995 to 2005, Martha Brackett went to work at the Bristol Diner which was owned by her daughter, Lisa Brackett at the time.

During her time there, around 1997, she had the opportunity to cook eggs Benedict for then-Gov. Angus King.

Wilson and Martha Brackett were eventually married in 2008. Wilson said they were together 43 years and simply didn’t get around to getting married as they both wanted to be comfortable first.

“I asked her twice and eventually she said yes,” Wilson said.

Martha Brackett’s last cooking position was at the Reunion Station in Damariscotta, which Wilson said she really enjoyed.

Wilson took care of Martha for the past 10 to 15 years through her long illness.

She died at the Sussman House at Pen Bay in Rockport, which coincidentally happened to be in the same room where Martha’s son, Peter Brackett, died years earlier.

Wilson said a physician’s assistant found them the room and asked if they wanted to be moved.

“No, no it’s beautiful,” Wilson said he told the worker.

(Correction: An earlier version of the article “Martha Brackett remembered as ‘best cook in Maine’” online and on the front page of the Oct. 7 print edition incorrectly reported that the family of Ted Kennedy used to own John’s Island in Bristol. According to the Maine Registers of Deeds Association official land records website, the professional boxer Gene Tunney previously owned John’s Island. The Lincoln County News regrets the error.)