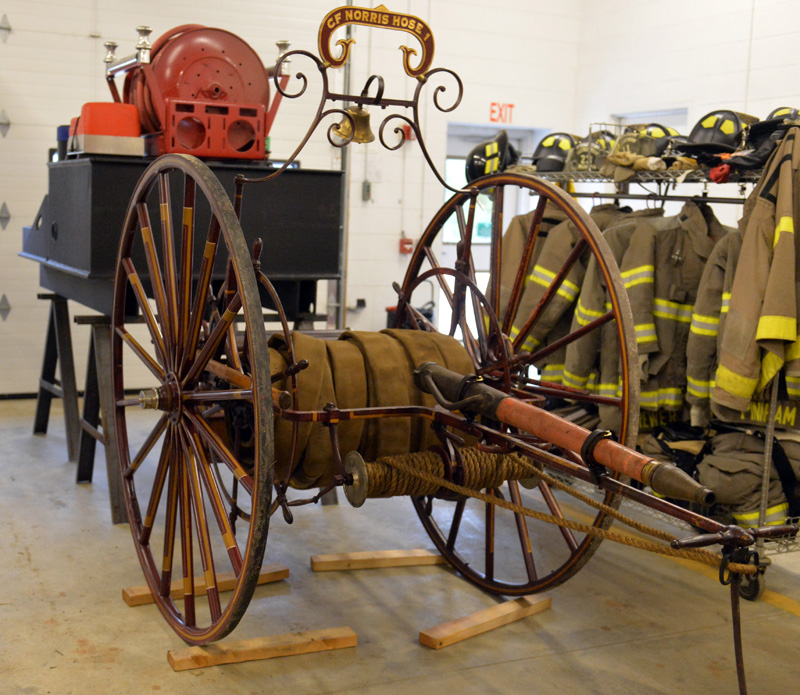 The Massasoit Engine Co., of Damariscotta, recently restored its 1898 Rumsey hose reel. The fire company was not expecting it to be ready until May 2021, but restoration work was completed early, and the company picked it up three days before Christmas.

The Massasoit Engine Co. decided to restore the hose reel this year in honor of Maine’s bicentennial.

The Massasoit Engine Co. voted to purchase the hose reel on Dec. 6, 1898 for $40. The company unanimously voted to name their hose reel C. F. Norris after the company’s second foreman Charles Norris.

The first fire company was formed in Damariscotta in 1845, three years before the town was incorporated, after a devastating fire destroyed 33 buildings in the business district. Steps were taken to procure fire protection for the town and a movement was started to purchase a pumper from the William C. Hunneman & Co. in Boston, Mass. It was the tradition of the company to name each machine they built after a Native American, thus Damariscotta’s little engine was named Massasoit.

The date stamped on the Massasoit hand pump is 1850. To operate the pump, men lined up on both sides and alternately and rhythmically pulled down on the wooden handles. 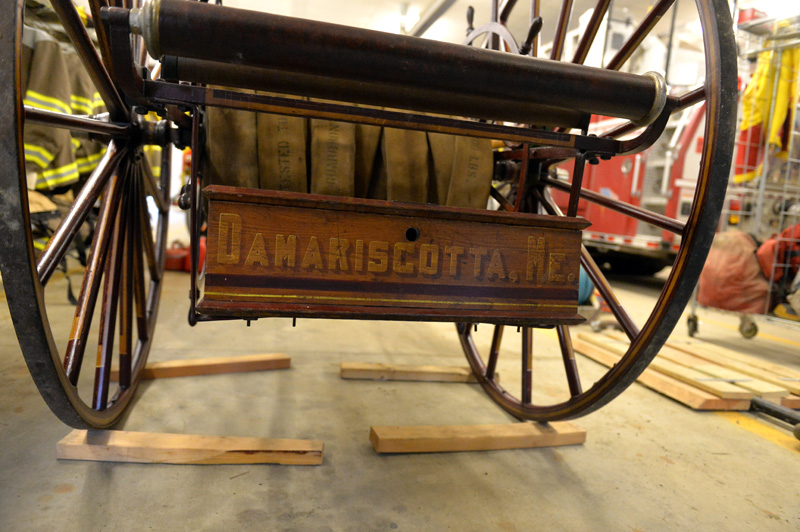 The restored tool box on the back of the C.F. Norris hose reel. (Paula Roberts photo)

The new pumper was used mainly to fill newly built ships with saltwater to test for leaks. The usual fee for doing this was $25, a hefty sum for the time. With one particularly large ship, there was fear that not enough men would show up to get the job done. One officer produced a barrel of cider and a large group showed up to do the work. There was too much imbibing, however, and the task was abandoned, forcing shipbuilders to finish the work.

In 1872, efforts began to reorganize the fire company. The old pumper was sent to Massachusetts for repair and a new paint job. By 1876, the fire company was formally organized and named the Massasoit Engine Co. after its little pumper.

A firehouse was built across from the Damariscotta Baptist Church on Bristol Road. Franklin Clark was Massasoit’s first foreman, and Charles F. Norris the second.

The pump was hauled to a fire scene by hand. Occasionally it was hauled by a team of horses owned by Royal Hall or William Foster. 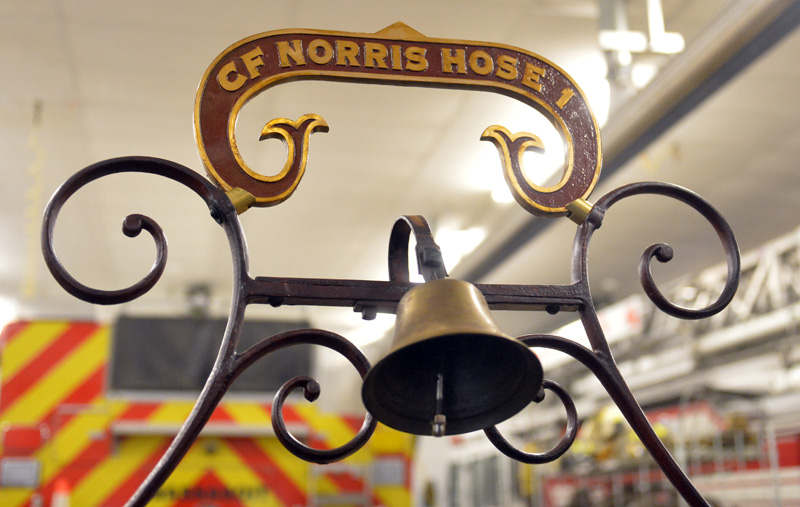 On Dec. 4, 1888, the engine company approved a bylaws change to prevent the members from slacking. According to the amendment, any member who was present at a fire and failed to assist in handling or working either the brakes or hose or any member who was guilty of running by the engine or hose carriage going to a fire would be fined 50 cents. This amounted to two hours of work, as each member was paid 25 cents an hour for duty at a fire.

The hose reel was pulled by hand, with company members grabbing onto a rope and hauling it to the scene. When pulled, a bell located on top of the hose reel would ring.

In 1945, the Society for the Preservation of New England Antiquities, known today as Historic New England, asked for the Massasoit hand tub. The engine company voted to keep its pump and hand tub. The old ladder truck was sold, however, for $10.

The hand tub was restored in the late 1990s in time for the town of Damariscotta’s sesquicentennial celebration. 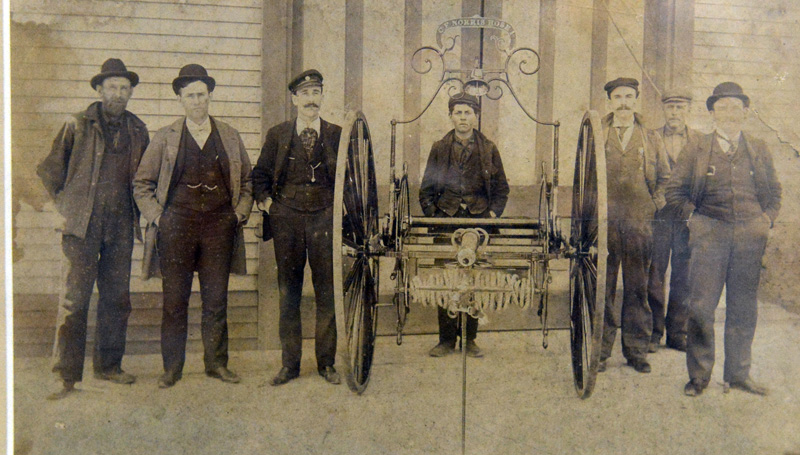 The Massasoit Engine Co. reached out to Andy Swift of Firefly Restoration Co. in Hope to restore the hose reel.

“He had to completely rebuild one of the wheels,” Damariscotta Deputy Chief James Hall said.

Swift said his wheelwright had to tighten up the spokes, strip the paint, then paint and distress the paint to match the original.

“It was in decent shape. You could not recognize any of the striping,” Swift said.

Swift made a template of the C.F. Norris sign from an old picture and sent it out to be cast. He then painted it. The bell is an old fire bell he had on hand in his barn, a converted old chicken barn.

Over the years, a layer of grime accumulated on the hose reel. Swift said a young lady worked on the reel for hours just cleaning the varnish using solvents and other techniques. 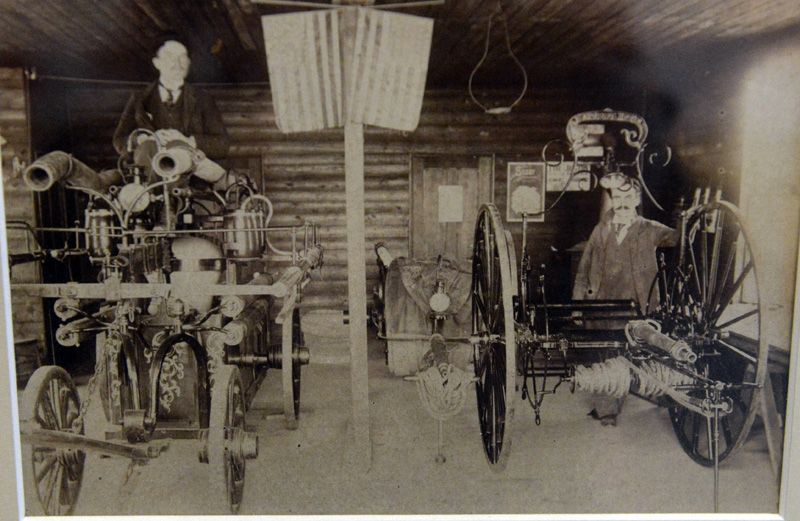 “The varnish was just like an oil painting, you have to strip the varnish to reveal the painting. Vanish will grab anything in the atmosphere,” Swift said.

After the old varnish was removed, three coats of clear finish were applied and then the wheel was distressed.

“I was very happy with how it came out,” Swift said.

The leather strap, used to hold the nozzle in its cradle, was replaced, as was half of the hose.

Hall said Swift redid the tool box on the back of the hose reel, which was “in really hard shape. Swift kept the original Damariscotta sign intact and finished the back.

“He got the whole thing looking really good. He pretty much brought it back to the original condition when it was new,” Hall said. 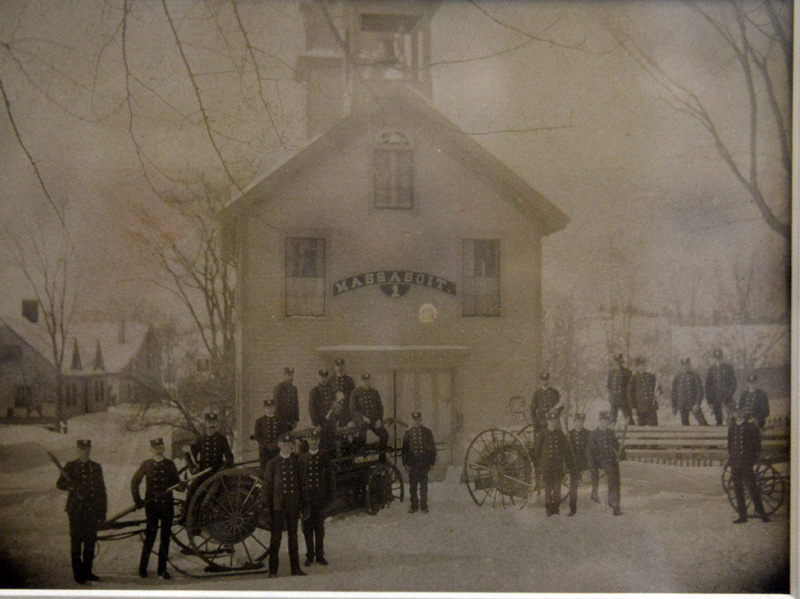 The Massasoit firehouse on Feb. 22, 1900 with company members in uniform. Equipment includes a hose reel on skis for winter travel, the Massasoit hand tub, a hose reel, and the ladder truck. (Photo courtesy of the Ivan Flye Historical Photo Collection)

“A lot of people, given that job, may have made it bright and shiny. We do not do that anymore, we try to make it like it was. It is like a time machine. When you get an older piece you don’t want to mess with that. Damariscotta’s was original. We really try to keep it as intact as we can,” Swift said.

“We do exact restorations, we are known nationally for that, and good at that. If I go to a fire engine show and there are 50 antique fire engines there, only about three have their original paint. Those are the ones I hang around to study my craft. When you have an original one, you try to keep it original. When you look at Damariscotta’s you can say ‘oh that is how Rumsey did that,’” Swift said.

Both the Massasoit engine and Norris hand cart are housed in a climate-controlled display area at the Massasoit Engine Co. in Damariscotta. Also in the display area are historic uniforms, patches, helmets, drum, trumpet trophies won at musters, and other fire fighting memorabilia. They can be viewed during open houses at the fire station.