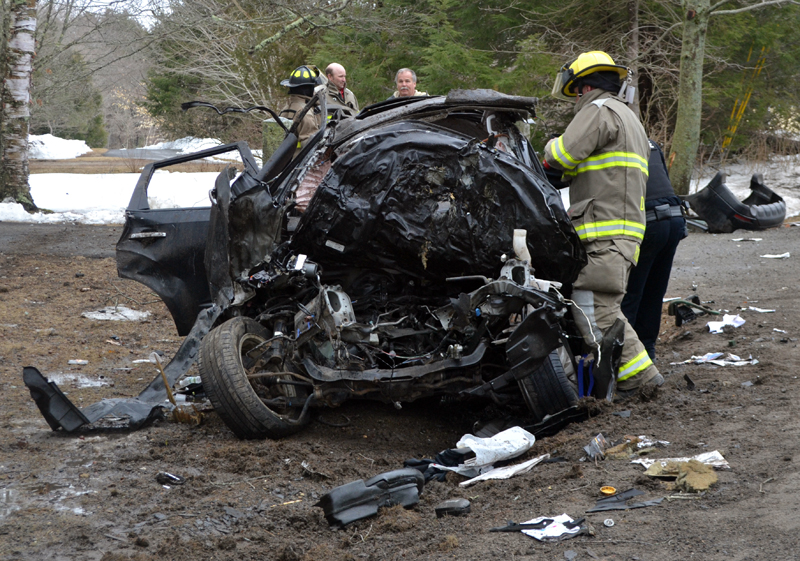 Damariscotta firefighters work at the scene of a single-vehicle accident on Bristol Road the afternoon of Tuesday, March 28. (Maia Zewert photo)

The Damariscotta Police Department has determined that a mechanical failure caused a single-vehicle accident on Bristol Road in Damariscotta the afternoon of March 28.

Mary Forde, 72, of Bremen, was driving a Subaru Forester south on Bristol Road at the time of the accident, according to interim Damariscotta Police Chief Jason Warlick.

An investigation determined that the throttle of the Subaru stuck while Forde was on Main Street, Warlick said. Forde applied both her brakes and the emergency brake as she was traveling south on Bristol Road.

The speed of the vehicle reached a point where Forde lost control of the vehicle, Warlick said. The vehicle left the road, struck a large rock and trees on the northbound side of the road, and spun before coming to rest in a yard.

Forde was ejected from the vehicle. The Central Lincoln County Ambulance Service transported her to LincolnHealth’s Miles Campus in Damariscotta. She was later transported to Maine Medical Center in Portland, where she is in serious condition, according to hospital staff.

In the event a driver finds him or herself in a similar situation, it is important to try not to panic, Warlick said. He recommends turning the vehicle off, though in some vehicles the steering wheel will lock and the brakes will be harder to press.

A driver could also place the vehicle in neutral, Warlick said.

“The engine might fail, but that’s a whole lot better than placing your life or someone else’s life in jeopardy,” Warlick said.