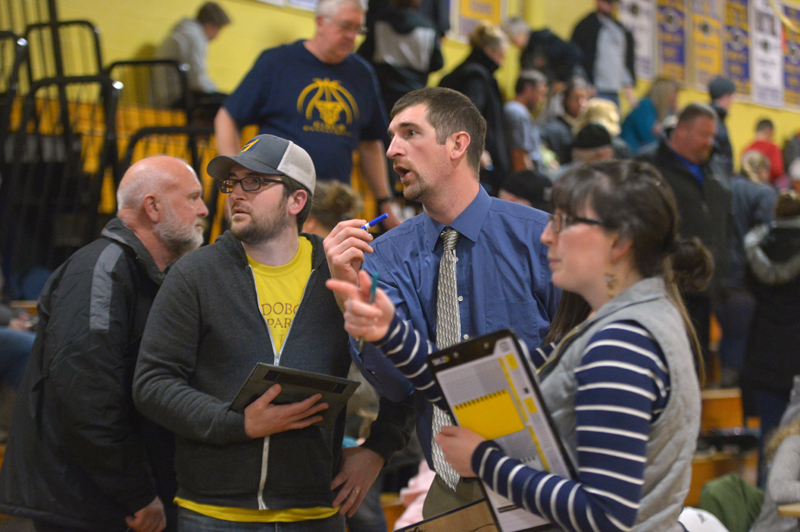 The sport has always bonded the brothers. Although Ryan and Lucas attended Coastal Christian School in Waldoboro, Medomak basketball has always played a large role in their lives. They grew up down the road from the school, participated in youth basketball programs, and attended many games. 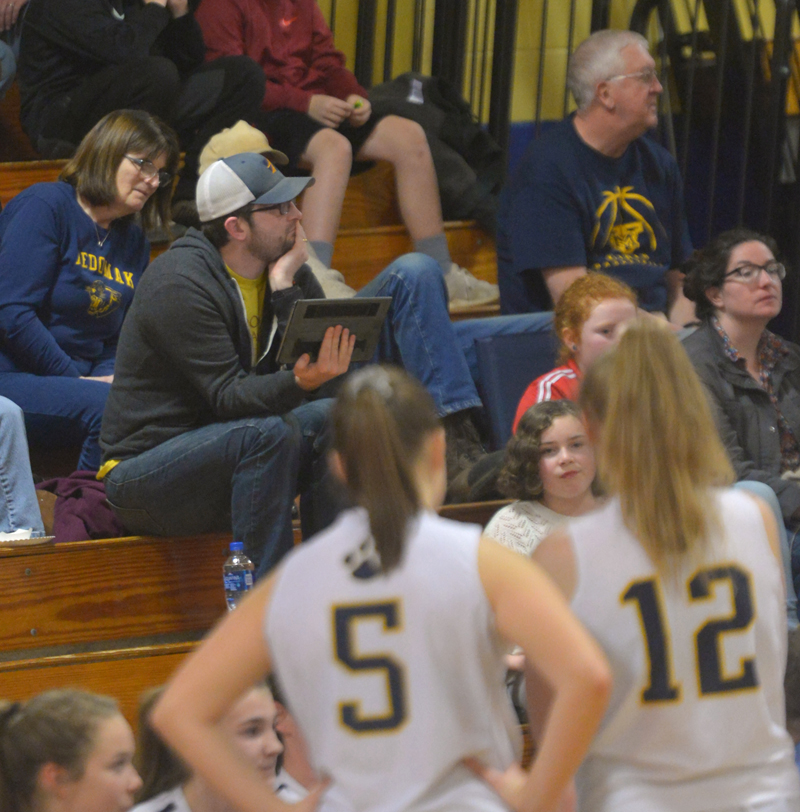 Later, while in college, the two would sometimes go weeks without talking, Ryan said. When the NCAA Tournament started up, however, they would talk multiple times a day.

“We’re very different people, but basketball has always been the thing we have in common,” Ryan said.

Ryan has taught physical science at MVHS for more than a decade. His second year at the school, he joined the coaching staff for the boys basketball team under Nicholas DePatsy, first as a freshman coach, then JV. Shortly thereafter, Lucas began keeping statistics for the team. 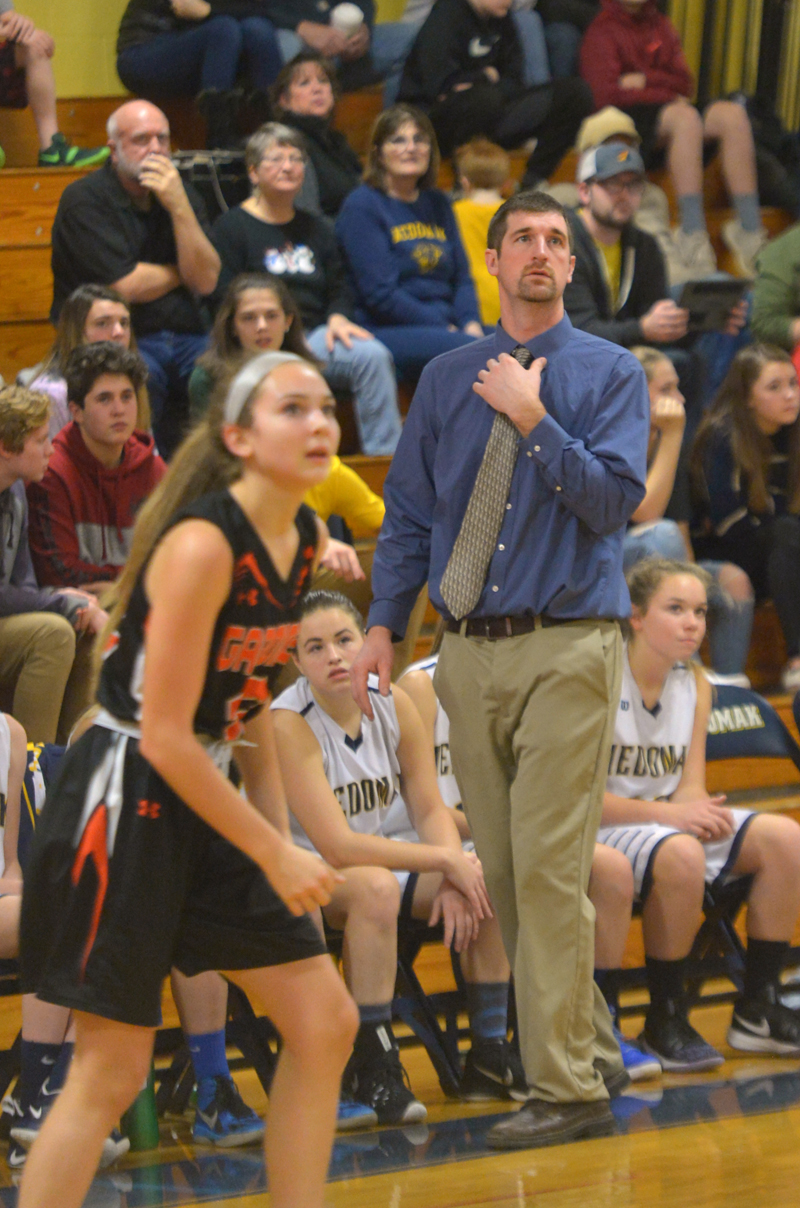 In 2016, when Ryan made the jump to coaching the girls varsity team, Lucas went with him.

At most games, while Ryan is on the floor with the team and the coaching staff, Lucas can be found sitting a few rows behind him with a tablet in his hands. In addition to tracking stats for both teams, he keeps an eye on goals the Medomak players have set for themselves.

Having the hard numbers lends some credibility to Ryan’s critiques and suggestions for improvement, he said. At a recent game against Erskine Academy, the Panthers were down in rebounds. Lucas shared the rebounding numbers and several other statistics with the coaching staff to use at halftime.

“We can gauge our success on actual numbers now instead of just guessing,” Ryan said. “Things like ‘You need to get on the boards, we’re not rebounding well,’ that’s something all coaches say. But when you have the numbers, it gives validity to my critique.”

Lucas usually shares information with the coaches at halftime before they go in to talk to the players. However, there are other times when the communication needs to happen during the game. If there are pieces of information his brother should be aware of sooner rather than later, Lucas will call down to the bench and pass along the information to the coaching staff with hand signals.

While this system tends to work pretty well, there have been some games in the past where additional assistance is needed.

“In a packed rivalry game, the Medomak section has been known to help me get his attention,” Lucas said. “There was a game at Lincoln (Academy) a couple years ago where I was trying to tell him something in the fourth quarter but he couldn’t hear me, so the fans between us started yelling at him for me.”

“Medomak fans are pretty basketball savvy and figured out almost immediately what we were doing,” Lucas said.

The key to the working relationship between the brothers is the skills each individual specializes in as well as an abundance of trust.

“His focus is on players and the X and O stuff,” Lucas said. “Mine is more math-based, so we look at it differently, but from a similar perspective.”

“There have been a couple times where he’ll tell me something he’s seeing on paper and it’s like ‘Really, that one?’ but most of the time, he’s right,” Ryan said. “Most times I’m going to go with his gut over my gut, because he’s got the numbers to back it up.” 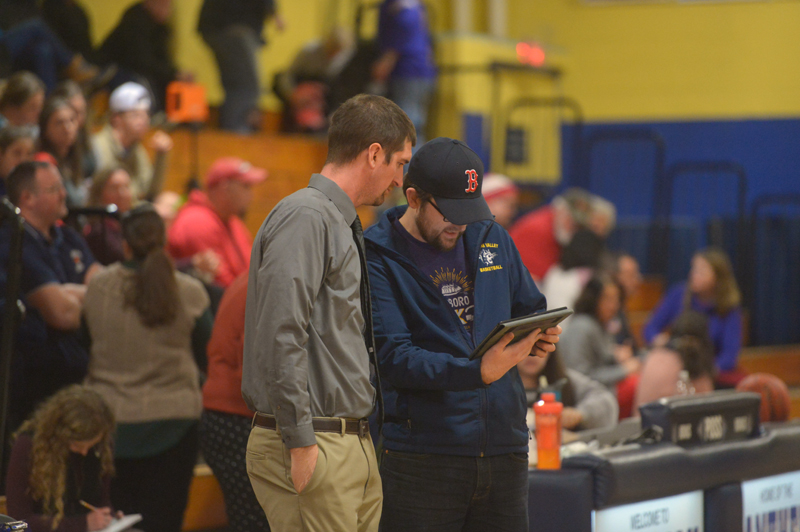 While all teams have someone taking stats during games, the knowledge Lucas brings to the numbers helps Ryan take his coaching to “a whole new level,” he said.

“I think in this day and age of high school sports, having ‘a Lucas’ is very necessary. It’s helped me a ton,” Ryan said. “The fact that he can get to all these things and translate it into something that I can give the girls is insane.”

While the position may be unofficial, Lucas enjoys the role he plays for the team.

“I was on basketball teams from when I was a little kid through high school, then I was part of a program in college and then I wasn’t for a long time,” Lucas said. “It’s nice to be a small part of a team again. I missed it.”