Students at Medomak Middle School in Waldoboro poured into the school’s cafeteria the afternoon of Monday, Feb. 27 for an assembly hosted by Google, the California-based technology giant.

The event was held for one of their own, Ruth Havener, a Friendship seventh-grader who won the state’s Doodle 4 Google competition.

Havener is one of 53 state and territory winners whose doodles now have a chance to appear on Google’s homepage in March.

The Doodle 4 Google competition is an annual nationwide contest open to students in grades K-12. Students create their own doodle, which must spell the word Google, from any materials they want.

Havener did so in art class, where students in art teacher Libbie Winslow’s gifted-and-talented program were tasked with selecting a contest to enter their work into.

Havener said she was drawn to Google’s competition by its theme, “What I see for the future.” 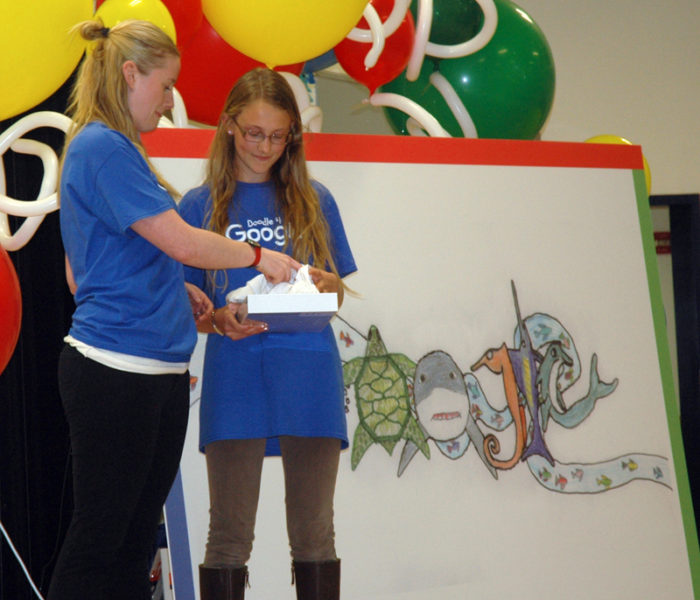 Havener, whose entry is titled “The Same Ocean in the Future,” said she was inspired to use marine life as the backdrop for her doodle after learning that great white sharks had been listed as a vulnerable species by the International Union for Conservation of Nature.

“The theme of the contest got me interested in the competition,” Havener said.

“The Same Ocean in the Future” depicts a colorful array of  sea creatures, with a shark at the center of the design forming the word Google.

To mark Havener’s accomplishment, two representatives of Google, Izzy Parkinson, originally from Kennebunk, who works for the company’s virtual reality team; and Mark Troianovski, a member of Google’s marketing department; were joined by Chris Rector, a regional representative for U.S. Sen. Angus King, I-Maine, at the Waldoboro middle school.

Parkinson referred to Havener as the school’s “doodler-in-chief” as she presented the seventh-grader with a specially designed T-shirt featuring her doodle.

Troianovski said the Google doodle is a way for the company to keep things fresh on its homepage.

“We try to bring art and creativity to everything we do,” Troianovski said.

Havener’s mother and father, Cecily and Andrew Havener, were in attendance for the assembly. Cecily Havener said she appreciated everything the school and Google has done for her daughter.

“They went above and beyond,” Cecily Havener said.

Sen. King offered his congratulations via video during the assembly, wishing Havener luck in the national competition while applauding the creative energy present among all the students at Medomak Middle School.

King encouraged those in attendance to vote for Havener during the national competition.

From Thursday, Feb. 23 through Monday, March 6, anyone can vote for their favorite doodle from the 53 state and territory winners at google.com/doodle4google/vote.html.

The public voting will determine the five national finalists, who will be announced March 31.

The finalists will be named from each of the competition’s age groups: grades K-3, grades four and five, grades six and seven, grades eight and nine, and grades 10-12.

The national winner will be announced the same day and the winner’s doodle will go live on Google.

The winner will take home a $30,000 college scholarship and his or her school will receive a $50,000 Google for Education grant toward the establishment and improvement of a computer lab or technology program.

Google started the contest in 2008. Last year’s winner was Akilah Johnson, a 10th-grader from Washington, D.C.