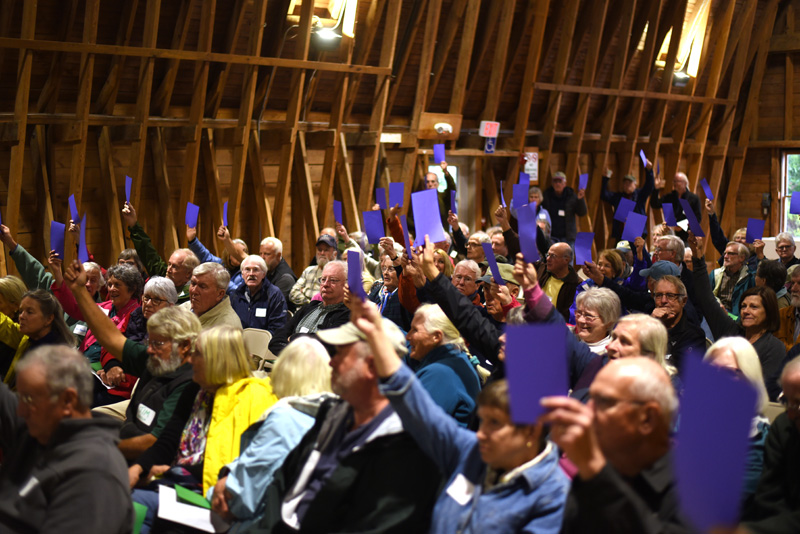 Almost 200 members of the Damariscotta River Association and Pemaquid Watershed Association overwhelmingly approved the unification of the land trusts in a town meeting-style vote at Darrows Barn in Damariscotta, Tuesday, Sept. 25.

DRA members were given a blue card to vote with and PWA members a green card. Members of both groups were given one of each card. There was only one vote against unification.

“It’s so exciting, the enthusiasm of both groups,” DRA Executive Director Steven Hufnagel said after the vote. “We are, first and foremost, membership and volunteer organizations. The people who carry this work are the heart of it.”

DRA Trustee Joel Russ said before the vote that it was great to see so many people gather on what “could be a momentous occasion” for the two organizations.

“I think it’s a fabulous idea,” Alison Lahnston, a DRA member who lives in Damariscotta in the winter and South Bristol in the summer, said of unification. She said it is a great opportunity for people to come together and work on the watershed.

DRA and PWA members had previously expressed support for the unification during an informational meeting Sept. 12.

The organizations began seriously discussing a merger in October 2017. A unification committee was formed with four representatives of each organization. The DRA Board of Trustees and the PWA Board of Directors signed an agreement of intent to unify Aug. 17, contingent upon the members’ vote.

Now that the members have voted in favor of unification, the organizations’ boards and staff will become one by February. 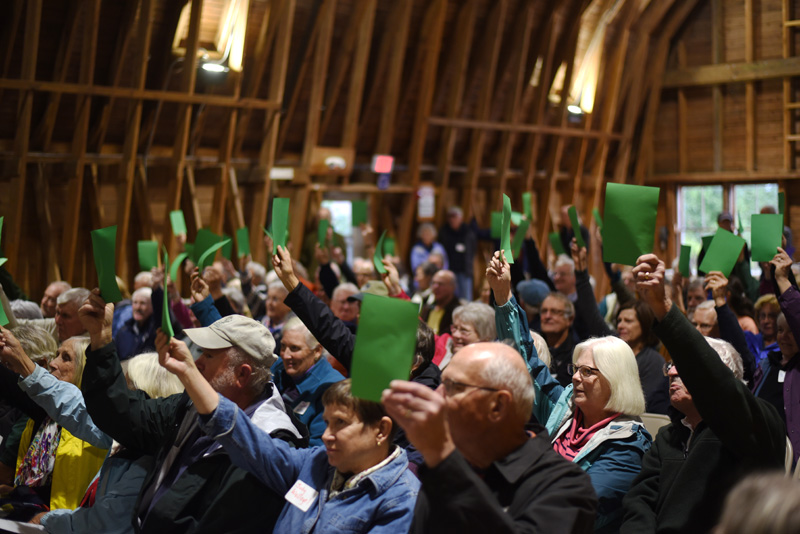 The DRA has six full-time employees and two or three seasonal education staff. The PWA has two employees, according to Hufnagel, who will be the executive director of the unified organization.

The staff of the newly merged organization will move into offices in the farmhouse at Round Top Farm in Damariscotta, which is being renovated and should be ready by early 2019, according to Hufnagel.

The DRA’s current headquarters at 110 Belvedere Road in Damariscotta will become a full-time nature and education center, according to Hufnagel. The future of the PWA office, at 584 Main St., has not been determined.

The Damariscotta-based land trusts previously worked together on projects such as Bristol’s Crooked Farm Preserve in the early 2000s. They still co-manage the preserve, according to Hufnagel.

At the meeting, members also voted to adopt new bylaws and appoint the officers of the unified organization’s board.

The members voted for Russ as president, Mike Kane as vice president, Bob Barkalow as treasurer, and Carolyn McKeon as secretary.

The new unified organization does not have a name yet. Russ said the unification committee will be thinking of possible names in the next couple of months, and asked anyone with suggestions to contact the committee.

Along with the new branding, the committee will discuss a vision for the new organization, programs, staffing, and future plans, according to Russ.

“If anyone has a brilliant idea, though, we’d like to hear it,” he said.