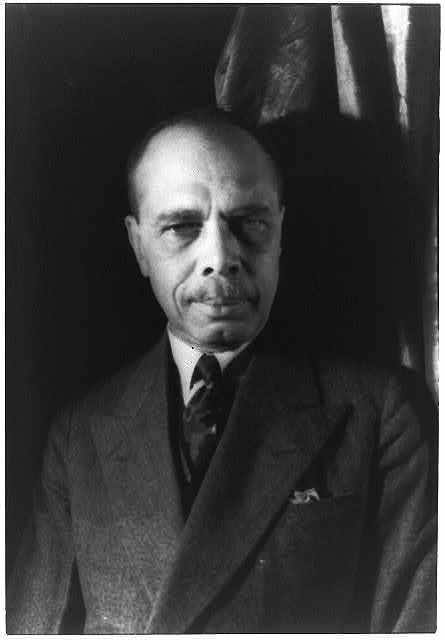 James Weldon Johnson, between 1900 and 1920. Johnson wrote the lyrics to “Lift Every Voice and Sing” before his 1938 death in a Wiscasset motor vehicle crash. (Photo courtesy Library of Congress)

The event will run from 10:30 a.m. to 3 p.m. and will include tributes, an open forum, luncheon, and more. Sonya Dunn, who is working on a documentary about Johnson, will give a presentation on the activist’s life and attendees will walk to the site of his death as well as the potential location for his memorial.

Johnson is most well-known as the man who wrote the poem, “Lift Ev’ry Voice and Sing,” in 1900. His brother, John Rosamond Johnson, set the poem to a musical composition, and it became known to many as “The Black National Anthem.”

Historically and culturally significant as the song is, it often obscures the innumerable accomplishments of Johnson’s life.

Born in Jacksonville, Fla., in 1871, Johnson was an acclaimed author, lawyer, educator, writer, and so much more. He served as a U.S. consul to Venezuela and Nicaragua under Theodore Roosevelt’s administration.

He was the first African-American leader of the National Association for the Advancement of Colored People, and he and his brother were founding figures of the Harlem Renaissance, writing some 200 songs that would appear in Broadway musicals.

Johnson became a permanent figure in Wiscasset’s history on June 26, 1938. He and his wife, Grace Nail Johnson, were returning to their New York City residence after visiting friends at a summer home at Pleasant Point in Thomaston.

Their car collided with a train on Main Street in Wiscasset, ending Johnson’s life.

The bill, co-sponsored by Sen. Chloe Maxmin, D-Nobleboro, and Rep. Jeff Hanley, R-Pittston, designates June 17 as James Weldon Johnson Day and directs the Permanent Commission on the Status of Racial, Indigenous, and Maine Tribal Populations to create a task force “to develop ideas for continuing James Weldon Johnson’s work to end systemic racism and to explore opportunities for memorializing his life,” according to the bill.

In an email to the Lincoln County News on Oct. 18, Maxmin framed her support for the bill in terms of the political and cultural moment in the U.S.

“In this age of divisiveness, it is more important than ever to recognize those who stood up against systemic injustice and fought for a better world. James Weldon Johnson was one of those people. We must remember those who lived like he did,” she said.

Residents from Wiscasset and across Maine are encouraged to attend the event and meet stakeholders from Jacksonville and members of the commission, including Dr. Meadow Dibble, director of community-engaged research for the commission.

In a phone interview on Oct. 13, she said an overarching goal of organizers from the commission is to solicit input from the community to support those who already put their efforts towards establishing a memorial.

“(L.D. 1441) is not looking to supplant a homegrown effort in any way, but rather to come and amplify those efforts,” Dibble said.

Wiscasset’s Lucia Droby is the de facto leader of that “homegrown effort,” although she said on Oct. 14 that the earliest proposal for a memorial dates back to 2013.

More recent efforts were partly inspired by substantial work in Jacksonville, Droby said. Earlier this year, the city broke ground on a park project at Johnson’s birthplace with $2.5 million in funding.

Droby became involved with the project when Town Administrator Dennis Simmons began receiving calls from Jacksonville, Washington D.C., and across the country, inquiring about the town’s plans to honor Johnson. 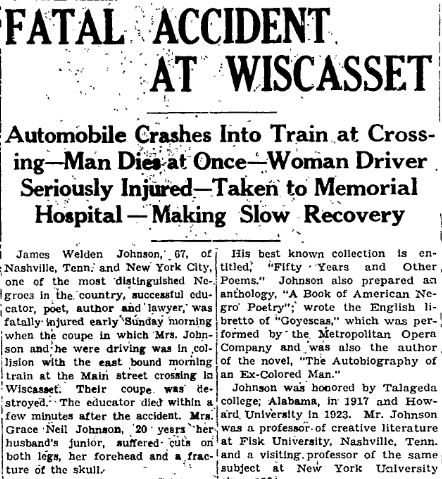 This article publicizing news of James Weldon Johnson’s death four days prior in Wiscasset was published on the front page of The Lincoln County News on June 30, 1938. (Screenshot)

Since then, Droby discussed potential avenues for a marker at length with those in and well outside of Wiscasset, including Tony Hill, an aide to Congressman Al Lawson who is involved with observance efforts in Jacksonville.

In May, Droby asked the Wiscasset Board of Selectmen to consider a proposal for a cast aluminum or bronze plaque commemorating Johnson to be installed on the fence in front of 64 Main St.

However, the passing of L.D. 1441 and an influx of private funding “exploded the project.” With Wiscasset potentially at the center of a statewide observance, local organizers broadened their ambitions.

“What’s remarkable is how committed people become when they learn about James Weldon Johnson and his connection to Maine,” Droby said.

She noted there was some opposition at the May selectmen’s meeting, as some residents argued that a tragic death within the bounds of the town does not necessarily justify funding and installing a memorial.

Dibble said she hopes to hear some of those perspectives on Saturday.

“It could be a challenging conversation, but I welcome that conversation, as I think we all do as organizers. We welcome the conversation and the opportunity to really ask these questions about whose memory do we honor and what does it mean for someone like James Weldon Johnson to be recognized as canonical to this beautiful town,” she said.

The statewide observance could go well beyond simply recognizing Johnson’s history, featuring educational and cultural events and initiatives across schools and communities in Maine, Dibble said.

“This wouldn’t, of course, just be to honor James Weldon Johnson, but really to forward his work towards racial justice,” she said. “Personally, I think it’s going to be the start of something really exciting.”

Dibble requested that those who want to attend the event RSVP by sending her an email at meadow_dibble@brown.edu.

(Correction: an earlier version of this article online and on Page 1 of the Oct. 21 print edition incorrectly reported that James Weldon Johnson and his wife, Grace Nail Johnson, were returning from visiting friends at Pleasant Point in Thomaston on the day of his passing. They had been visiting their friend E. George Payne at his residence in Isleboro. The Lincoln County News regrets the error.)

(Correction: an earlier version of this article online and on Page 1 of the Oct. 21 print edition failed to report that Rep. Rachel Talbot Ross, D-Portland, sponsored and presented L.D. 1441 to the legislature. The Lincoln County News regrets this error.)