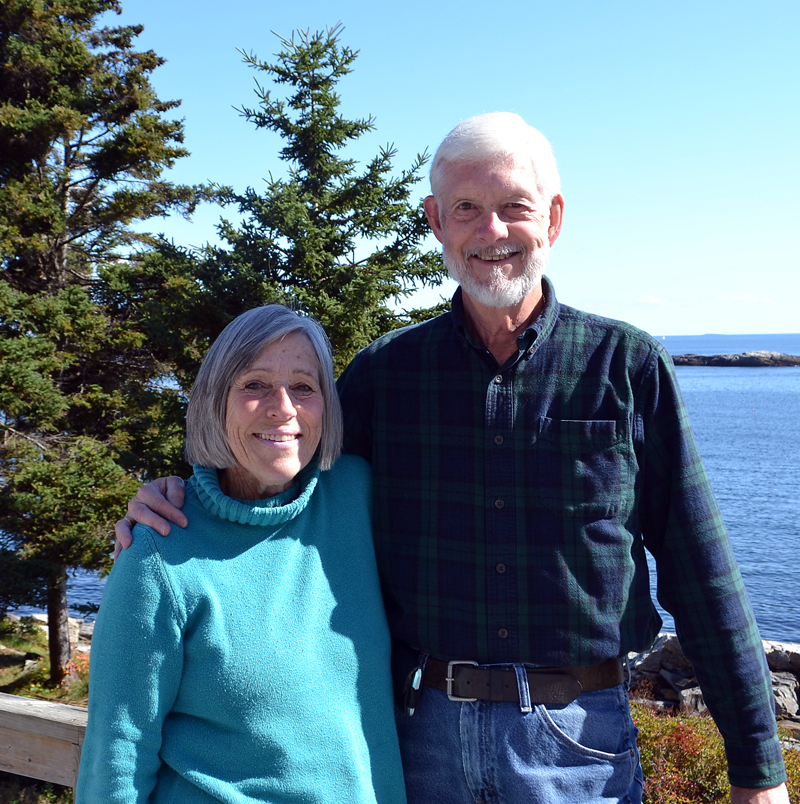 Sue and Jim MacKenzie at their home in New Harbor. (Maia Zewert photo)

Part-time New Harbor resident Jim MacKenzie worked for U.S. Customs and Border Protection for more than three decades before retiring in 2002. Now he and his wife, Sue MacKenzie, have turned his career of searching for things into “a nice hobby” with the use of a metal detector, which has resulted in their finding two lost wedding rings at Pemaquid Beach Park.

The MacKenzies are retired and split their time between homes in New Harbor and Vermont. In both states, they visit public beaches and parks with their Mindlab Safari metal detector to look for items either lost or previously undiscovered.

The couple’s interest in metal detecting dates back to before Jim MacKenzie’s retirement. A co-worker took a side job selling metal detectors. Having “always fostered an interest” in the hobby, Jim MacKenzie purchased one at the time, but did not have the opportunity to use it nearly as much as he wanted, he said.

After retirement, Jim MacKenzie decided to pursue the hobby, and invested in the more high-tech Mindlab Safari, which emits different tones depending on what kind of metal it detects. Unfortunately, Jim MacKenzie said, aluminum and gold have the same signature, “so for every one gold ring you find, there are hundreds of those pop tabs.”

When the metal detector indicates the presence of an item, Sue MacKenzie is the designated digger. She uses a tool called a Pro Pointer, which pinpoints the item’s location.

Depending on the location and the weather, the couple’s excursions last anywhere from one hour to “five or six,” Jim MacKenzie said. 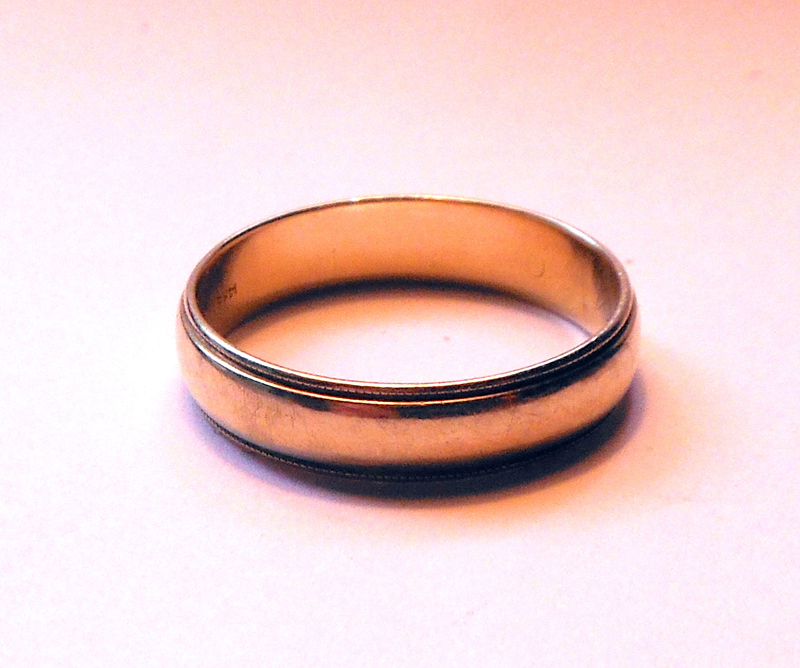 Jim and Sue MacKenzie, of New Harbor, found this wedding ring while metal-detecting at Pemaquid Beach Park in August and tracked down the owner. (Photo courtesy Jim and Sue McKenzie)

While the couple sticks to public beaches and parks, occasionally they have had the opportunity to explore private property with permission from the owners. They have used their metal detector in cellars, old properties under new ownership, and, on one occasion, at an abandoned Little League field.

While searching the latter, the MacKenzies made two remarkable discoveries, including a 1908 Barber dime which, after a quick run under the faucet, “shined like it had just come out of the mint,” Sue MacKenzie said.

The other discovery at the ballfield was an antique metal syringe. At first, the couple believed it was from a veterinary clinic. After Sue MacKenzie conducted some research online based on the engravings on the metal, they discovered it was actually a syringe from a bicycle tire repair kit made by the Chicago-based bike tire company Morgan and Wright in 1895.

One of the couple’s favorite places to use their metal detector is Pemaquid Beach Park, just a few miles from their New Harbor home. They have found countless coins, various pieces of costume jewelry, and other smaller items at the beach.

“We make it a point not to invade the space of others, especially at the beach when it’s busy,” Jim MacKenzie said.

The MacKenzies visit the beach with their metal detector so often, the employees in the ticket booth will often alert them if anyone has reported anything lost or missing. A few years ago, the staff told the couple a man had lost his wedding ring while building a sandcastle with his son. 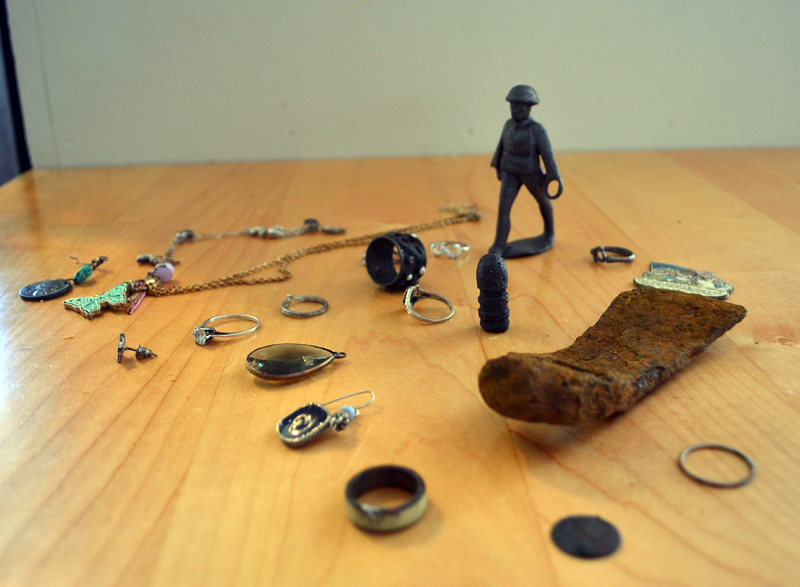 During their metal-detecting excursions, Jim and Sue MacKenzie, of New Harbor, have found countless coins and lost earrings. Some of the more unusual finds include a lead soldier and a piece of an antique tool. (Maia Zewert photo)

It took the MacKenzies a few visits to locate the ring, due to beachgoers setting up on the spot where the man believed he had lost it. Jim MacKenzie found the ring on the third visit to the beach, and Sue MacKenzie was able to reach the man before the family left Round Pond at the end of their vacation.

A more recent discovery of a wedding band required more legwork by the MacKenzies to find the proper owner. While metal-detecting at the beach Aug. 11, Jim MacKenzie discovered another wedding band. Unlike the find a few years prior, however, no one had told the park staff about the lost ring.

To track down the rightful owner, the MacKenzies posted notices at the beach snack bar and ticket booth, as well as on the bulletin boards at C.E. Reilly & Son and the Bristol Area Library, and placed a “found” advertisement in The Lincoln County News.

The LCN ad connected them to a relative of the ring’s owner, Sue MacKenzie said. The daughter of the owner called the MacKenzies and recited the initials and wedding date inscribed on the inside of the ring. The inscription had been purposely left out of the advertisements.

The ring was safely returned to its rightful owner in Massachusetts at the beginning of September, Sue MacKenzie said.

“That’s the most satisfying thing, really,” Jim MacKenzie said. “We get a lot of pleasure out of returning things to their rightful owner.”