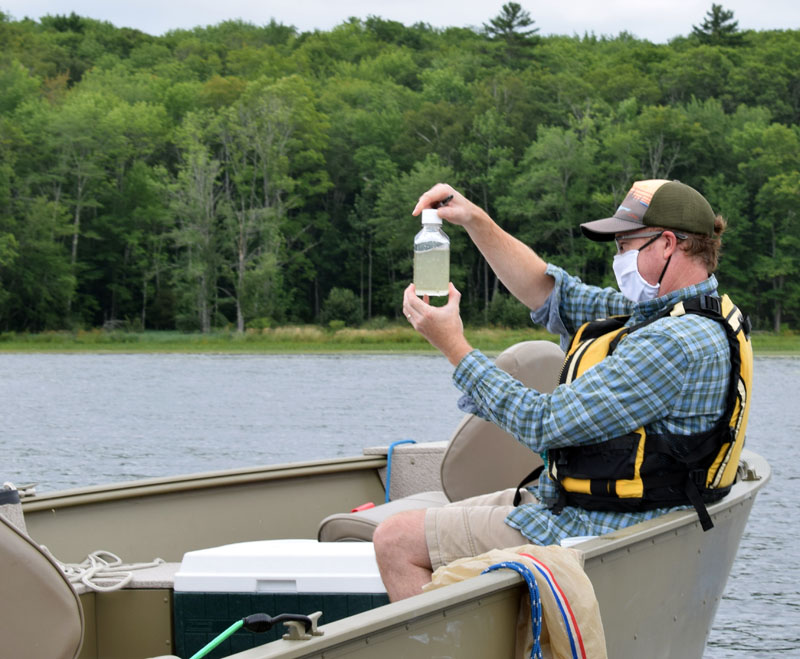 Midcoast Conservancy is warning Damariscotta Lake residents and visitors of cyanobacteria on the south arm of the lake, but a state official says the concentrations do not appear high enough to cause toxic conditions.

According to an email from Director of Development Chris Massi, the Edgecomb-based nonprofit has received numerous calls from lakefront residents about the presence of blue-green algae in the lake.

Cyanobacteria are photosynthetic bacteria that can be found in a wide variety of moist soils and water.

According to Linda Bacon, who works in the Lakes Division of the Maine Department of Environmental Protection’s Bureau of Water Quality, cyanobacteria, formerly known as blue-green algae, are normally present in bodies of water. The bacteria thrive in warm, nutrient-rich water.

“Every lake has it, but it becomes a problem when it really takes over. There’s evidence it would like to take over on Damariscotta Lake, but we are not there yet,” Bacon said.

For now, Bacon said, “If there’s a lot of algae in one spot, try to keep the dogs away from it.”

According to the DEP’s website, although small amounts of cyanobacteria can cause mild reactions in sensitive individuals, significant illness is rare. However, severe reactions and deaths of pets or livestock drinking cyanobacteria-contaminated water have been reported outside the state.

“In lakes with this, you don’t want to drink the water, but you shouldn’t probably be drinking water from a lake anyway,” Bacon said.

An employee of Damariscotta Lake State Park said the park remains open. The park and its popular beach are on the northeast shore of the lake, opposite from the area of the algae bloom. 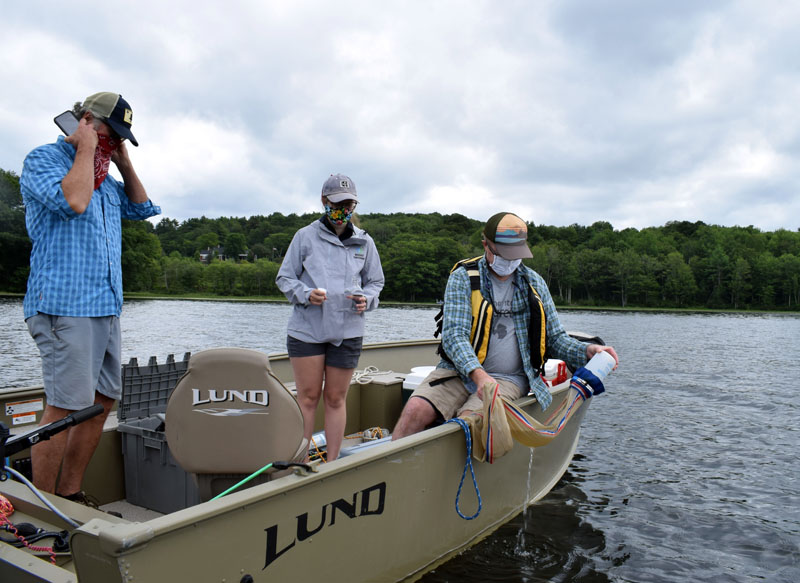 The bacteria appear to be present from the western shore of the lake, across from Camp Kieve in Nobleboro, south to Milliken Island Cove in Newcastle, according to the email.

Bacon said a larger bloom would be clearly evident.

“If it really took over, you wouldn’t be able to see through the water column at all,” she said.

According to Bacon, cyanobacteria is not typically an issue in Damariscotta Lake, but other lakes in the state deal with it every summer.

“There are lakes that have bloomed every year for the past 50 years or more, called chronic bloomers,” Bacon said.

Bacon said even lakes with larger blooms do not necessarily need to shut down recreation in open water.

Massi’s email stated that the DEP had confirmed the presence of Oscillatoria, a type of cyanobacteria that has the potential to produce neurotoxins that can be dangerous or fatal to humans, pets, and wildlife.

“It is one of the species that is capable of producing toxins but doesn’t always produce toxins,” Bacon said.

According to the email, Bacon has said the current volume of cyanobacteria observed on Damariscotta Lake does not appear to be enough to create toxic conditions. 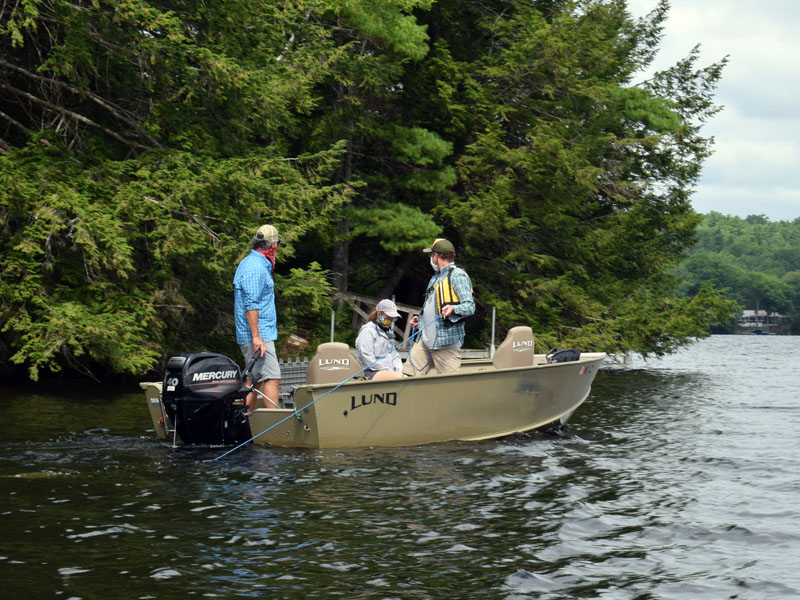 However, people should stay out of areas with heavy accumulations, such as the scum that forms on the shoreline.

During a water-sampling expedition launched from Camp Kieve on Saturday, Aug. 15, Peter Countway, a senior research scientist at Bigelow Laboratory for Ocean Sciences in East Boothbay, also said the levels of bacteria do not appear high enough to be toxic.

Two of the goals of Saturday’s expedition were to determine the extent of the bloom and to sequence the DNA of the cyanobacteria to confirm its precise species.

“Identifying the species of cyanobacteria will help us understand more about the mechanism of toxicity of the cyanobacteria and its behavior,” a report by Nease says. 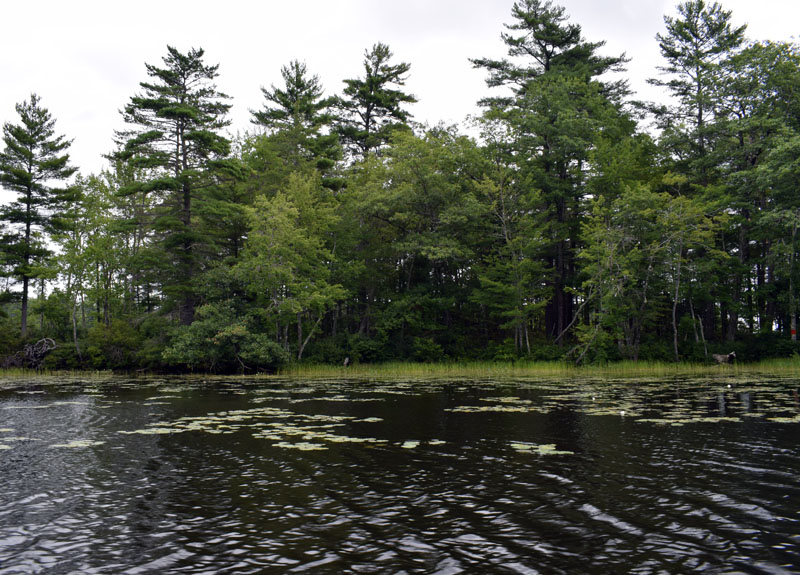 Damariscotta Lake’s western shore, across from Camp Kieve. The site was one of five where a local scientist took water samples to study cyanobacteria in the lake Saturday, Aug. 15. (Evan Houk photo)

The bacteria “regulates where it is in the water column,” Bacon said. “It has organs that are like an internal life jacket that help it float up to the lake’s surface.”

Since it was cloudier Saturday than earlier in the week, when the cyanobacteria was first reported, it was much less visible. When the sun came out later in the day, the researchers saw more cyanobacteria, according to Nease’s report.

Bacon said rain and wind can make the bacteria less visible, but do not necessarily get rid of the bacteria.

According to the conservancy’s email, the recent hot weather has raised the water temperature in Damariscotta Lake, creating conditions conducive to the formation of an algae bloom.

According to Bacon, area lakes have seen a rise in summer temperatures over the past 15 years.

“Fifteen years ago you were looking at temperatures around 75 degrees and now we are seeing temperatures at 85 degrees,” Bacon said.

Bacon said that in addition to hot weather, the internal phosphorus recycling mechanisms of lakes can play a part in where algae blooms take place.

Additionally, lakes with chronic issues appear to be at lower elevations. The U.S. Geological Survey lists the surface elevation of Damariscotta Lake as 52 feet.

“A lot of lakes where we have this problem are at elevations under 400 feet. We see it a lot in Kennebec County. A lot of the lakes there were under the ocean 12,000 years ago. There were glaciers on top that pushed the land down and it took years for it to come back up,” Bacon said.

Midcoast Conservancy advises lakegoers to keep their children out of areas where the algae is present, avoid ingesting the water, prevent pets from drinking the water, and shower after swimming in the lake. 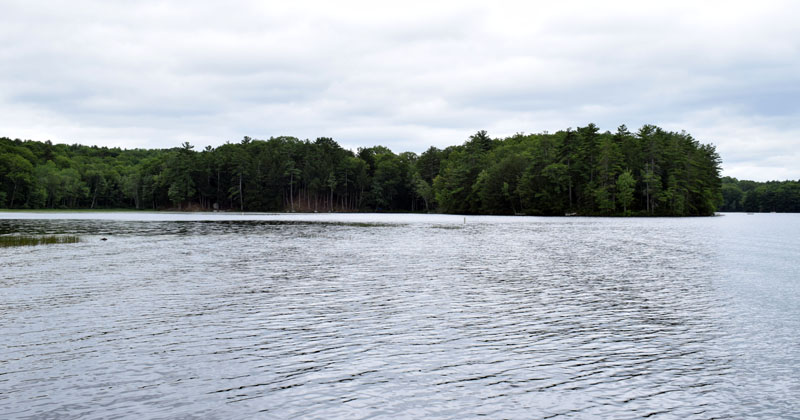 Hatch Cove on Damariscotta Lake. The cove was one of five sites where a local scientist took water samples Saturday, Aug. 15 to study cyanobacteria in the lake. (Evan Houk photo)

Additionally, Massi’s email advises residents of the southwest portion of Damariscotta Lake with water intakes to purchase bottled water for drinking, since boiling and reverse osmosis systems do not remove toxins from cyanobacteria, and to take brief showers, due to the potential for toxins from the bacteria to become airborne.

Midcoast Conservancy staff and volunteers will continue to patrol the lake for the cyanobacteria and are working with the DEP to further monitor lake conditions.

The email indicates that algae blooms can be avoided by reducing the sources of nutrients for bacteria. It advises lakefront property owners to avoid mowing to the edge of the lake, maintain a 100-foot shoreline buffer, and ensure their septic systems are functioning properly, while cleaning the tanks regularly.

On Saturday, O’Donnell, of Midcoast Conservancy, said that because of warming weather associated with climate change caused by carbon emissions, the blooms will only get worse and become more toxic unless there are “major changes in the future.”

O’Donnell discussed the importance of working with property owners and the code enforcement officers in the towns that border the lake to increase shoreline buffers, which will reduce the runoff of nutrients into the lake.

O’Donnell said Midcoast Conservancy will be educating property owners on the benefits of the LakeSmart program. LakeSmart is a statewide certification and education program for lakefront property owners to minimize impact on water quality.

O’Donnell said about 25% of property owners on Damariscotta Lake are LakeSmart-certified.

For more information on cyanobacteria, go to maine.gov/dep/water/lakes/cyanobacteria.html.