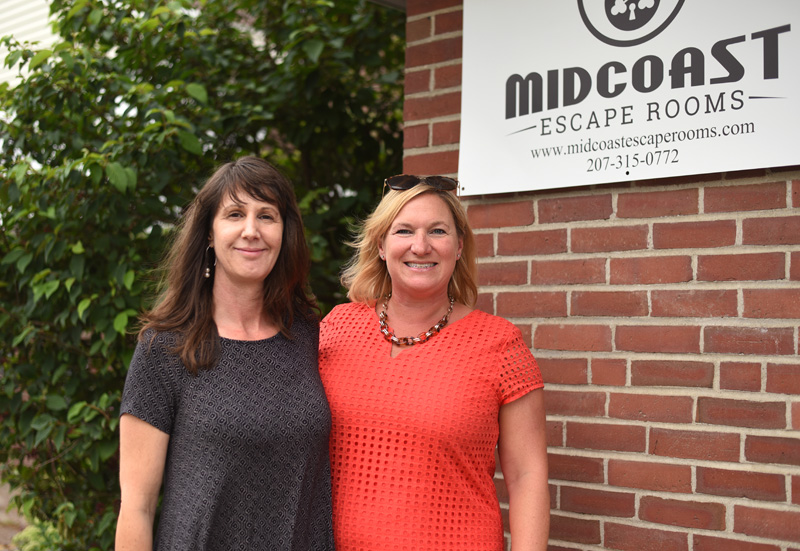 Escape rooms, the game where teams have 60 minutes to solve clues in order to “escape” a themed room, is coming to Damariscotta.

“I had gone to a couple of escape rooms this winter and thought it was an absolute ball to do, so much fun,” Manchester said. “So from that, I came up with the idea that we needed one in the Midcoast.”

“There isn’t really anything between Brunswick and Bangor as far as escape rooms, so she knew that this area could really use something like that,” Hanna said.

Manchester and Hanna have been friends for 10 years and have coordinated murder mystery nights for friends in the past.

“We had a lot of fun with that, so she thought of me as far as coming up with the ideas for the rooms and kind of orchestrating them,” Hanna said.

“We both have a lot of qualities that kind of complement each other. That’s why we feel like the partnership will really work well,” Hanna said.

During the day, Hanna works at First National Bank. Manchester, a former lobster broker, owns her own businesses, Martha Manchester’s Cleaning and Painting, and Jewelry by MM.

The duo is leasing the building on Main Street from First Federal Savings Bank.

The different rooms and themes include a pirate ship, a museum heist, a bait room, and Cleopatra’s tomb.

“I tried to tie in the stories to local areas,” Hanna said, explaining the ideas behind the bait room and pirate ship room.

They intend to switch out the themes every four to six months, according to Hanna.

“Trivia is such a big thing around here, so this kind of plays off of trivia, but it’s more of a live immersion,” Hanna said.

“It’s a live clue game in a room,” Manchester said.

The duo hired Ren Jones, from Boothbay, to be the puzzle master and design the clues for each room. Jones belongs to Mensa, a society for people with an IQ above the 98th percentile, or in the top 2 percent, on standardized IQ tests, according to Manchester.

“The only thing we’re worried about are (the clues) being a little too hard for people,” Manchester said.

In the waiting room, there will be a “wall of fame” to display the photos of groups that “escape” the rooms.

“The thing that we want people to understand is, there’s only about a 20 percent success rate in getting out of the rooms. We don’t want people to be discouraged if they don’t make it out,” Hanna said. “It’s intended to stump you, to challenge your brains.”

Participants will not be allowed to have cellphones in the rooms, so locked boxes will be provided to store them in for the hour.

The difficulty level of the clues is designed for patrons 18 years old and over, however, 14- to 17-year-olds can participate with a parent or with a signed waiver.

“If there is a team that wants to come in with somebody under 14, we just would ask that they call us and we could try and accommodate or suggest which room might work best for them,” Hanna said.

“We’re toying with the idea of turning the pirate ship room into having a second set of clues that we would then promote for younger kids,” Hanna said.

The rooms will be under surveillance by a “game master” who can give hints if a stumped team requests help, according to Hanna.

The rooms are available by reservation only. People can choose which room and time slot they would like when they make a reservation online, or call to inquire about availability.

Each room has a certain capacity, with some rooms able to accommodate four to six people, others up to 12, according to Manchester.

Midcoast Escape Rooms can be rented for businesses wanting to work on team building, birthday parties, and other special occasions, according to Hanna.

“We want to work a lot with the local community,” Hanna said, mentioning possible collaboration with local restaurants, in which diners would receive a discount on an escape room.

There will be extended hours during school vacations, and hours are subject to change, according to Manchester. If interested in a time not listed, call for availability. The cost will be $20 per person.

For more information or to make a reservation, go to midcoastescaperooms.com or call 315-0772. Midcoast Escape Rooms is also on Facebook.