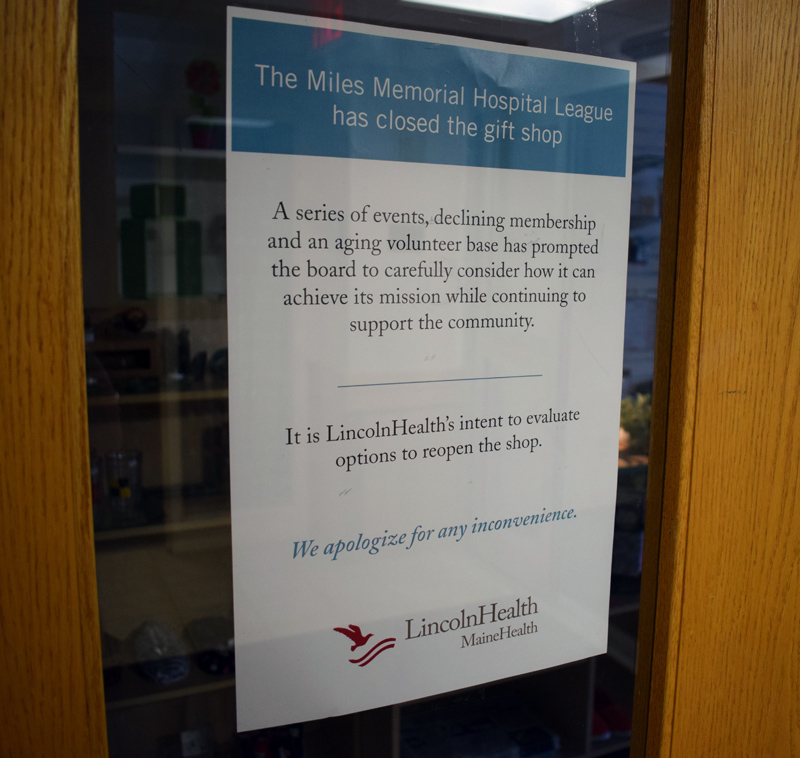 A sign on the door of the gift shop at LincolnHealth’s Miles Campus announces its closure. The gift shop was run by the nonprofit Miles Memorial Hospital League. (Evan Houk photo)

The Miles Memorial Hospital League closed its gift shop at LincolnHealth’s Miles Campus in Damariscotta on Friday, Sept. 13, as the charity examines its current operations and future goals.

Marva Nesbit, president of the Miles Memorial Hospital League Board of Directors, said that after lengthy and difficult discussions, the board voted unanimously to close the gift shop a few weeks ago.

Donovan said by email that the hospital has “just started the planning process to determine what might be possible for the future of the gift shop.” He said he does not have any details yet.

A statement from Nesbit and the hospital league’s board says “the unexpected resignation of a valued and talented assistant manager” and the sale of the league’s large storage barn at the corner of Pond Road and West Hamlet Road in Newcastle presented an “opportunity to take a step back and look at the future of our organization.”

Nesbit said the barn has fallen into disrepair and the league decided to sell it rather than fix it.

“Our goal is to carefully consider how we can continue to achieve the core mission of the league while continuing to provide strong support for LincolnHealth and other community organizations,” the board said in the statement.

Nesbit said she plans to talk to a facilitator who will help the nonprofit develop some long- and short-range goals. She said the board will go on a retreat to discuss the future of the organization this fall.

In addition to the approximately $150,000 the league donates to the hospital each year, it contributes annually to Central Lincoln County Ambulance Service Inc., The Community Energy Fund of Lincoln County, and The Massasoit Engine Co., according to Nesbit. It also contributes to other community organizations and has purchased defibrillators for the Lincoln Theater and Skidompha Library.

“We’re going to concentrate on what makes us money, which is the thrift shop,” Nesbit said. “We’re going to put our energy there, better improve our organizational structure there, with accountability.”

The thrift shop at 114 Church St. opened in 2010, after the league decided to end its giant annual rummage sales at Chapman Farm in favor of a year-round presence.

The league still holds smaller tent sales at its donation drop-off point on Belvedere Road in Damariscotta. The sales take place on the third Saturday of each month from May to October.

Since it opened, the thrift shop has been wildly popular. Nesbit said there are sometimes customers waiting in the parking lot to claim items right off the delivery truck.

Nesbit said that when she was installed as president of the hospital league in October 2017, the gift shop had been losing money for some time.

She said the shop, which opened in 2004, was returned to profitability through the hard work and creativity of volunteer Di Silar, who introduced new items into the inventory and rearranged displays to open up the space last October.

Nesbit said she has heard that many gift shop volunteers are interested in continuing to volunteer in other ways.

She emphasized the hard work over the years of all the gift shop’s volunteers, some of whom have been volunteering for decades.

“We have some of the most dedicated volunteers,” Nesbit said.

However, Nesbit said, profitability was not the board’s only consideration in its decision to close the shop.

Nesbit said that during its discussions, the board agreed that the gift shop is essentially a courtesy to the hospital, providing its employees with a place to hang out and chat or grab a candy bar.

The hospital does not sell candy bars in its cafeteria or vending machines because it prefers to promote healthier foods. “We sold them, and we sold them by the boatload,” Nesbit said.

The Lincoln County News was also a popular item at the gift shop. Nesbit said there was always a run on the newspaper when it was delivered Wednesday afternoon.

Nesbit noted that most other hospital gift shops are privately operated, such as those in Brunswick’s Mid Coast Hospital and Rockport’s Pen Bay Medical Center.

“I would be misrepresenting things if I did not say this is a challenging time for our organization,” Nesbit and the board said in their statement. “We believe we will emerge more efficient, better defined, and better than ever as we streamline our activities, conserve our resources, and focus on the future.”