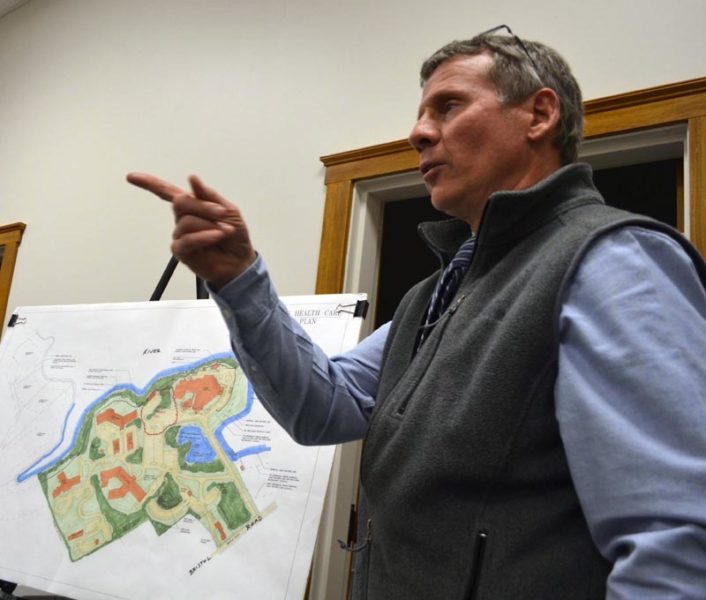 Peter Biegel, a landscape architect with Land Design Solutions, presents the plan for LincolnHealth’s outpatient health center during a meeting of the Damariscotta Planning Board on Monday, Nov. 14. The planning board will hold a public hearing on the application Monday, Dec. 5. (Maia Zewert photo)

The Damariscotta Planning Board will hold a public hearing on LincolnHealth’s proposed $13 million outpatient health center for the Miles Campus on Monday, Dec. 5.

The public hearing will follow two presentations by the project’s architect and landscape architect, most recently during the planning board’s Monday, Nov. 17 meeting.

The outpatient health center, which has been a topic of discussion since 2010 and is included in the hospital’s master facility plan, will consolidate many of the physicians on the Miles Campus into one building between the hospital and Schooner Cove, an independent living facility.

The 2 1/2-story building will be 40 feet tall and have a footprint of 16,560 square feet. It will consolidate physicians’ practices currently spread throughout the campus, including  those at the Dorothy B. White Orthopaedics Center, the Miles Professional Building, and the Webster Van Winkle Medical Building, according to Peter Biegel, a landscape architect with Land Design Solutions.

The building will be located on the site of the Maine Behavioral Healthcare building, formerly the women’s center, and its parking lot.

The building will also house a community room of approximately 1,000 square feet with an attached outdoor patio.

Biegel and Charles Rizza Jr., the architect on the project and the director at MorrisSwitzer Environments for Health, originally presented the project to the planning board Oct. 3. During the November meeting, Biegel and Rizza presented some recent updates to the plan.

At the request of Damariscotta Fire Chief John Roberts, the driveway near the entrance has been extended to reach the patio to allow for emergency response, Biegel said. In addition, a stairway directly to the roof has been added to aid in firefighter access.

There will be five underground propane tanks for heating the building, Biegel said. Each propane tank will hold approximately 1,900 gallons, and the hospital is working with Colby & Gale Inc., Biegel said.

The hospital will also submit a stormwater plan to the Maine Department of Environmental Protection for approval.

The public hearing about the health center is one of three scheduled for the Damariscotta Planning Board’s Dec. 5 meeting. The board’s meeting will begin early, at 6:30 p.m., and each public hearing will be limited to 30 minutes.