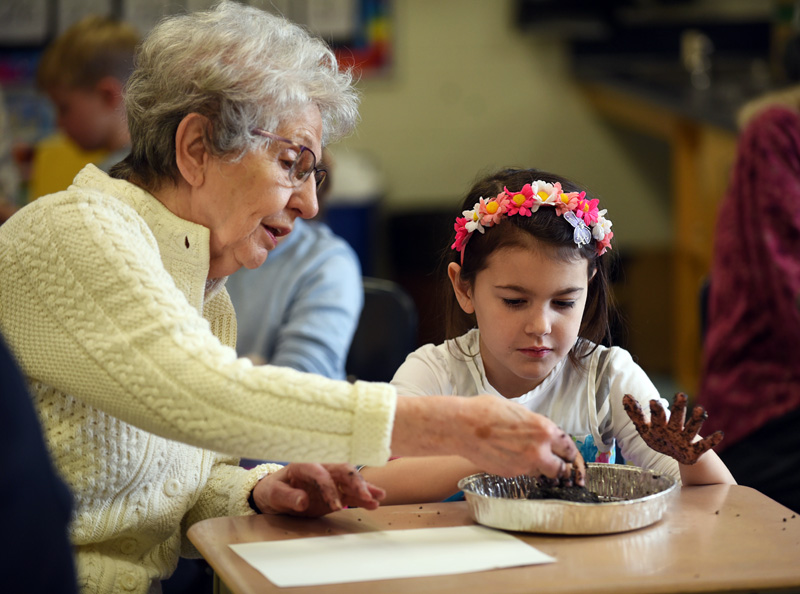 “My hands are filthy!” 8-year-old Rosy Kate Adams exclaimed while throwing her hands in the air, showing her “elder” friend Roberta Atkinson the mess she had made.

Anna DeGloria, a volunteer for the Wild Seed Project, conducted a seed bomb-making workshop with a class of second-graders and their adult friends as part of the Miles of Friends program at Great Salt Bay Community School in Damariscotta the morning of Wednesday, March 21.

The Miles of Friends program has been a part of GSB for about 15 years, according to second-grade teacher Lorna Fake. The students are paired up with an “elder” friend for the school year, who they meet with once a month to do activities, either at the school or at Skidompha Library. They then write each other letters between meetings. The last activity for this school year is going to be a talent show at Skidompha, Fake said.

“You see the engagement … It’s such an advantage for the children, the one-on-one time,” Fake said of the program.

“It’s been very rewarding to do, (the kids) are great,” David Caron, who has been a part of the program for four years, said. 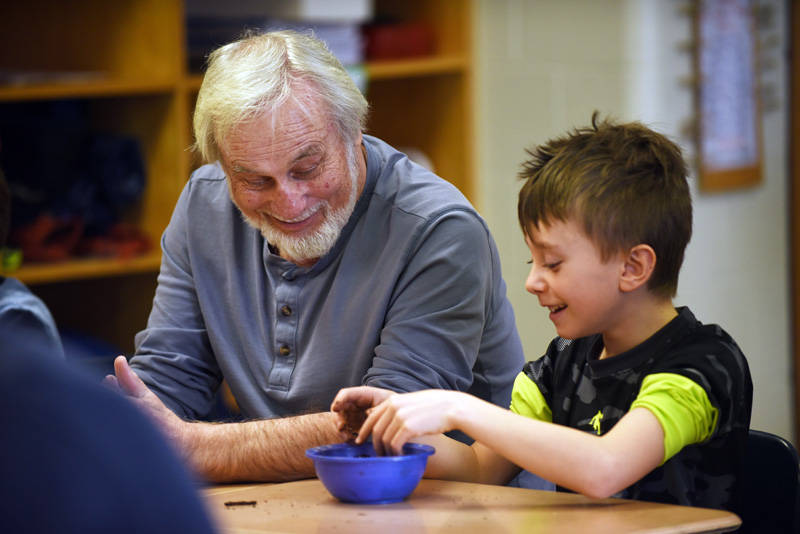 DeGloria had done a similar seed bomb-making workshop in December at Rising Tide Community Market, where she works, which led to the suggestion of making it into a Miles of Friends activity.

The workshop’s goal is to “bring back the love and appreciation for the native plants,” DeGloria said.

Using clay, compost, and water, the children and their friends made wild seed balls with black-eyed Susan seeds.

The ingredients were mixed together and rolled into balls. Students then used their thumbs to make an indent for the seeds to go into.

The students could either plant them when they got home, or put them in the refrigerator until they could be planted. 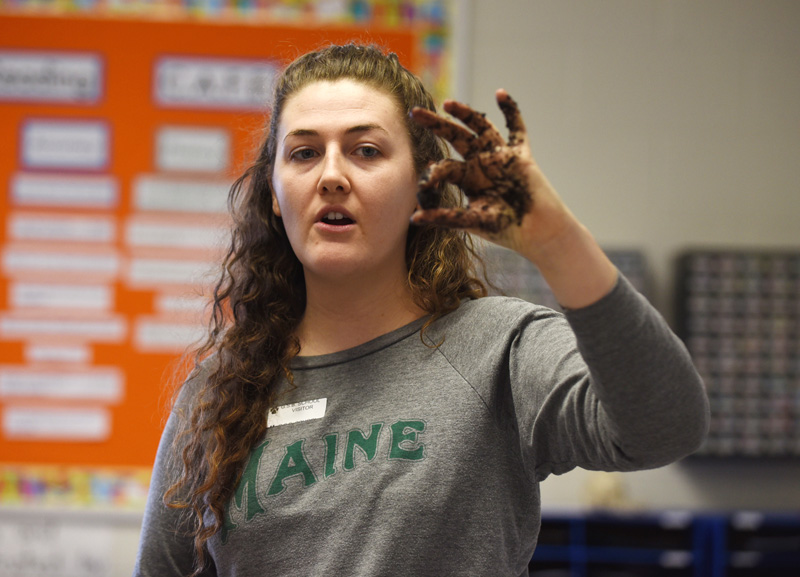 “Black-eyed Susans are hardy, just like us Mainers,” DeGloria said to the class. She said that even though there is still snow on the ground, the seeds could be planted immediately.

The seed ball-making is part of the Wild Seed Project, a nonprofit out of Portland that strives to increase the use of native plants in all landscape settings.

According to the project’s website, it does this “in order to conserve biodiversity, encourage plant adaption in the face of climate change, safeguard wildlife habitat, and create pollination and migration corridors for insects and birds.”

The nonprofit does this by selling seeds of locally grown native plants, and by educating the public on seed-sowing in order to get citizens involved.

“These native plants are food and habitat, they’re not just for us,” DeGloria told the class. She taught the class about what pollinators such as bees do, and why they need the plants to do their jobs.

The black-eyed Susan seeds will grow and bloom in the first year they are planted, unlike a lot of other native plants, according to DeGloria.

“(Black-eyed Susans) are a good choice for instant gratification … It’s an easy activity for all ages,” DeGloria said.

Kay Miller has been participating in the Miles of Friends program for eight to 10 years.

Asked what keeps her coming back to the program each year, Miller pointed to her partner, 7-year-old Ellis Stone. “These cuties,” she said.