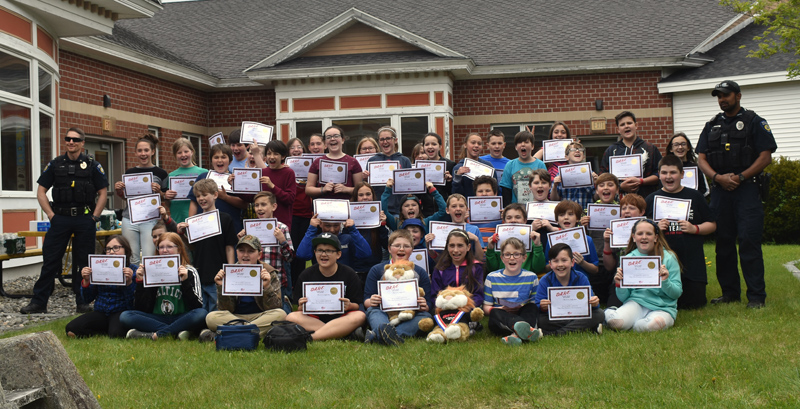 Fifth graders at Miller School in Waldoboro celebrated their completion of a 10-week D.A.R.E. program the morning of Tuesday, May 28.

During the D.A.R.E graduation in the school courtyard, each student received a certificate for completing the program, while two received a Daren the D.A.R.E. Lion for their essays.

The essay winners were Lyra Puchalski and Alden Reed. The students all wrote D.A.R.E. essays at the conclusion of the course.

Jack thanked the students for their hard work. “You all worked very hard over the last few weeks,” he said.

D.A.R.E., or Drug Abuse Resistance Education, was established in Los Angeles in the early 1980s as an effort to prevent drug use and violent behavior among children.

“The D.A.R.E program has been revamped since I was in fifth grade,” Jack said.

Students learn about risky situations and how to make safe and responsible choices related to bullying, peer pressure, and other topics, including alcohol and tobacco use.

In an email about the event, Jack said one of the most important parts of the class is the opportunity to foster positive interaction between law enforcement and students.

Jack, who joined the Waldoboro Police Department in December 2018, said this was his first year of D.A.R.E. in Waldoboro.

He has taught D.A.R.E. since 2012, bringing the program to schools in Cushing, Friendship, and Thomaston while working as a Knox County sheriff’s deputy.