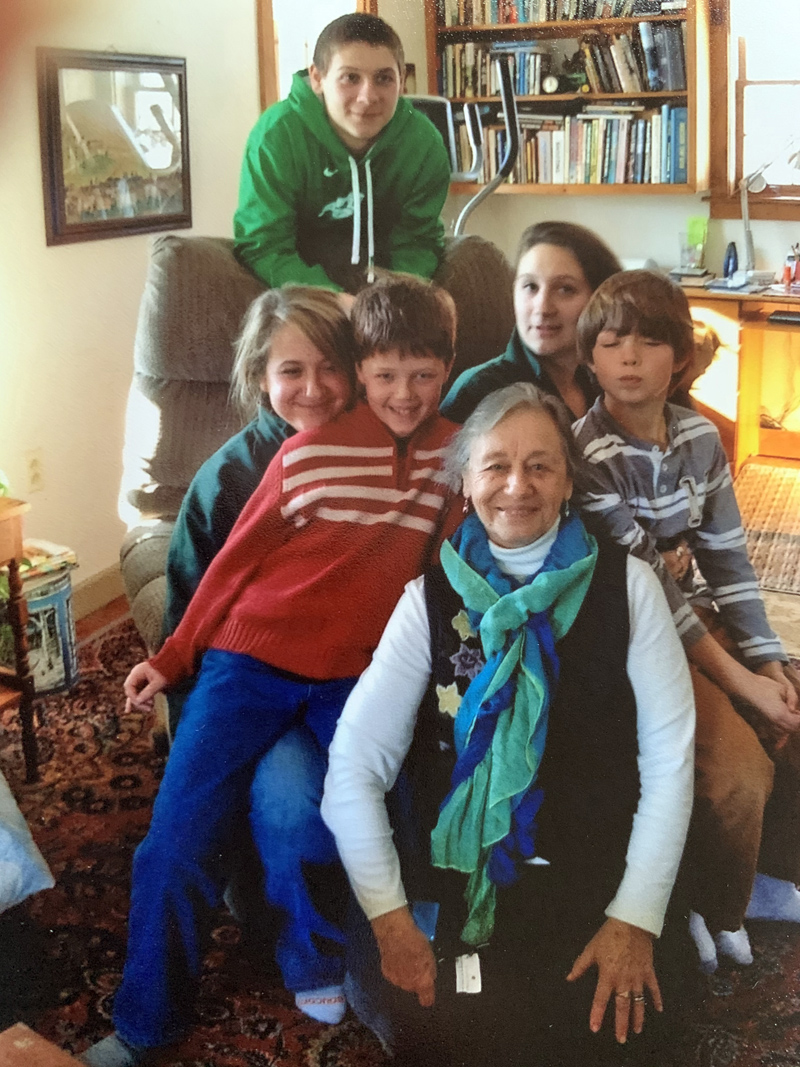 “I don’t think anyone could not love her, not respect her and like her. She had the answer to every question. … She was a lady with a capital ‘L.’” Those were the words of Whitefield resident Cathey Sell, speaking in a recent interview about her friend of more than 20 years, Mildred “Millie” Sabatine. Sabatine, a pioneering cheesemaker and farmer who lived just down the road from Sell, passed away from cancer on Nov. 7 at the age of 83.

Sabatine was “farm-to-table” before the term even existed. She famously made the cover of Organic Gardening magazine back in May 1970, when she and her husband, Onofrio “Nerf” Sabatine, lived in their first home together – one they had built themselves — on Old Sleepy Hollow Road in Pocantico Hill, N.Y.

The article inside the publication, “The Good Life on One Acre,” talked of the Sabatines’ organic farm, where they raised produce, livestock, and their three children, Lisa, Paul, and Nicholas, before moving to Whitefield in August 1976 to do basically the same thing.

The Pocantico Hill farm is also where Millie Sabatine made her first foray into cheesemaking, before coming to Whitefield and taking the local cheese world by storm with her organic cow’s-milk mozzarella, provolone, and parmesan.

“I met her right after we moved here from Arlington, Va.,” said Sell. “There’s one farm between us. She’s my next-next-door neighbor.”

Sell spoke of Sabatine in the present tense. Like others interviewed for this story, she was understandably somewhat reluctant to think of the vibrant, well-loved Sabatine as being gone.

Sell said she met Sabatine when Sabatine asked her to be in the book club she had founded. “I was asked to join the book group as soon as I got here,” Sell said. “Millie was the heart of the book group. … She read voraciously and it was hard to get a new book that Millie hadn’t read.”

Sell said Sabatine went to the Gardiner Public Library every Monday “and she would stock up. She’s known there. The guy at the library said he’s just shocked that she’s gone. It’s a wide-reaching loss – not just her family, not just her neighbors.”

Millie Sabatine’s daughter, Lisa Sabatine, who lives in Georgetown, recently sat down for an interview alongside her father at her parents’ Whitefield home.

“She was just my mom,” said Lisa Sabatine, revealing that she had not been aware growing up just how well known her mother was. “The whole outpouring of people who came (to the celebration of her life at Sheepscot General) and said how amazing she was was, for a lack of a better word, a surprise.”

Lisa Sabatine said that a vendor she ran into at the Bath Farmers Market told her not long after her mother died, “Your mom was a legend in the cheesemaking business.”

In addition to being featured in Organic Gardening and other out-of-area publications, Millie Sabatine and her homestead-style cheesemaking were also featured locally in the Kennebec Journal (“From the KJ Cupboard,” Jan 12, 1982, and “Cheese pays off for Sabatines,” from 1986) and in The Lincoln County News (“Cheesemaking is good business,” July 13, 1978).

“She went to Pennsylvania to a guy who made cheeses. I guess that’s where she got the spark,” said Nerf Sabatine. “She was very intelligent, very quick to learn things.”

“And very creative. She grew strawflowers every year and made wreaths out of them,” said Lisa Sabatine, looking up somewhat sadly at a row of drying, upside-down bunches of strawflowers tacked to the rafters that her mother had hung there, intending to turn them into this year’s holiday wreaths.

“She made all my clothes when I was little because I was too skinny to buy regular store clothes,” Lisa Sabatine said, adding that her mother made cards for birthdays, Mother’s Day, and Father’s Day, with photos of people and various scenes.

“And little poems,” said Nerf Sabatine. “And she loved her flower gardens, her cats.”

Millie Sabatine also made preserves, bread, sauerkraut, sausage, and pickles, and she canned tomatoes and made her own soap. (“I have to do something with all that lard from the pigs,” she was quoted as saying in the “From the KJ Cupboard” article about her soap making.)

“They never used any pesticides,” said Lisa Sabatine of her parents’ lush, productive vegetable garden. “They took turns picking off potato bugs. Dad got the morning shift; she got the afternoon shift.”

“She would gather lettuce and tomatoes for supper and that’s when she’d pick the bugs off,” said Nerf Sabatine.

Lisa Sabatine described her parents’ lifestyle as being “totally self-sufficient,” adding that “they still have two freezers full of food.”

“She liked to get out and talk to people. She liked her book group. She loved her book group, except the one time the husbands were invited and they took over, and they were never invited back,” Lisa Sabatine said with a laugh.

“We weren’t invited back because some of us took over the discussion and some of us hadn’t even read the book,” Nerf Sabatine said.

“She loved to swim. For years, she would walk or drive the truck down to the river (behind the house) and swim,” said Lisa Sabatine. “She loved games. She loved to win. She never let us (kids) win. If you beat her, you earned it.”

“She liked to try new things, like cross-country skiing out back. It was a disaster!” Lisa Sabatine said, smiling. “Also, she tried to ride the mule at about age 70.”

Of Millie Sabatine’s two decades of popular and prolific cheesemaking, Nerf Sabatine said, “People came to the house to buy cheese. She liked that kind of socialization.” The sign at the end of the Sabatines’ driveway announcing the availability of farm-fresh mozzarella cheese helped customers find exactly where to go to get their hands on Millie Sabatine’s delicious cheeses. Articles in the Kennebec Journal and the LCN helped steer customers her way as well. Nerf Sabatine said his wife’s cheese business was “flooded with people” following the publication of those articles.

Millie Sabatine made cheese seven days a week in the 1970s and 1980s – 1-pound braids of mozzarella, plus the provolone and the Parmesan. Most of the cheese was aged in the cellar and the attic, said Lisa Sabatine.

“She made it right here on the wood stove, 100 pounds a week, by hand in a pot – 10 gallons a day,” said Lisa Sabatine. “People were surprised at her obituary – all the things she did – because she just presented as a regular person.”

Lisa Sabatine said her mother began to sell cheese in August 1976, very shortly after moving to Whitefield, at a craft fair in town. Soon after, people were flocking to the Sabatines’ house to buy cheese “at 4 or 5 pounds a pop,” she said. “There were times she had more customers than she had cheese available.”

“She didn’t do things for the accolades or the publicity. She used to shy away from it,” Nerf Sabatine said.

“She became known, but she didn’t set out to be famous,” said Millie Sabatine’s longtime friend and neighbor Marie Sacks. “As for her being ‘famous,’ I didn’t pay much attention to that. For me, she was just always there. … If I think of Millie, I think of a person who is very even-tempered. She and I never had a cross word. … She was very independent and very warm. I miss her very much.”