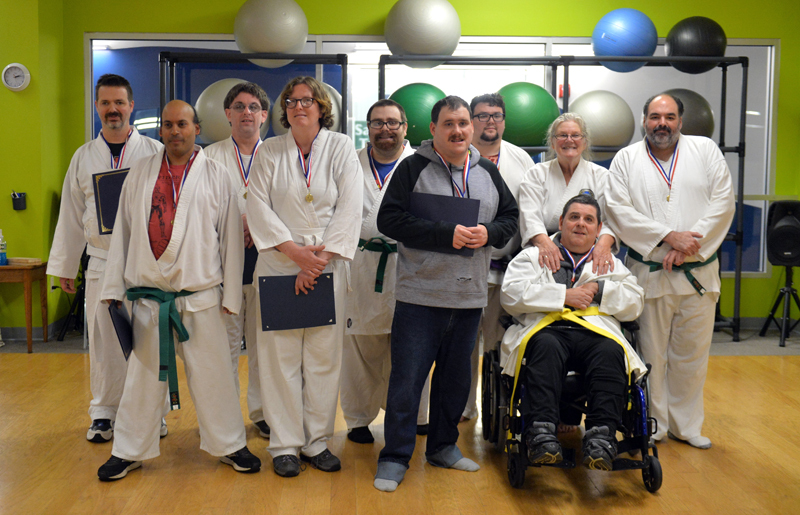 Porter has been the sensei of a karate class filled with Mobius clients at the CLC YMCA in Damariscotta for the past five years. She has taught karate, including to special needs children and adults, for 25 years, starting in western Massachusetts, where she owned her own studio. Her son has Asperger’s syndrome and took karate classes beginning at age 6.

“He gained a lot from it,” Porter said.

After moving to Maine, Porter has worked at Mobius in Damariscotta for the past seven years.

Due to COVID-19, her karate class for Mobius clients went remote for two and a half years, and Porter had to lead her students via Zoom. Not an easy task for any group of students, of any age. Demonstrating a move to students on a tiny computer screen while trying to keep 10 students focused on the task at hand, was a challenge.

“Doing on Zoom, it was really hard to demonstrate and control their excitement,” Porter said.

The group has once again been meeting in person since August.

“It has been great. They hung in there. Today is a celebration of them hanging in there,” Porter said during a belt test and promotion ceremony at the CLC Y on Wednesday, Nov. 16.

Porter’s rapport with her students is uplifting, as she compliments them on their form, kicks, punches, smiles, and spirit throughout the class. Smiles abound on all the faces, including wheelchair user Ricky Cook, who grinned from ear to ear and joked with Porter during the entire 90-minute class.

“Every one of them has their unique thing,” Porter said. “They all have their own way, and I love it.”

Each karate class starts with a symbol of respect, where students enter the classroom one at a time, by highest rank, and bow to their sensei.

New student Joshua Strong was presented a white belt by fellow student Matt Harvey. When Porter asked Strong what to do with the belt, Strong had a quick answer.

“Do not wash it,” Strong said. “It will ruin the knowledge.”

Porter told the class that the white belt symbolized a new beginning.

After a brief meditation, that began and ended with a ring of a bell, students clapped three times to awake the spirit as part of an old time tradition. Porter then told students what the colors of the belt represented: white, purity; yellow, sun; green, grass; purple, setting sun; and brown, dirt.

Students then practiced their kata, punches, kicks, and rolls. As a special treat, students closed out the class by breaking boards, a highlight for the students.

“This is my favorite class,” student Laurie Curtis said.

“I love them all so much,” Porter said of the students. “They have come a long way. They never cease to amaze me how much they have grown.”

“They are not the most coordinated, but neither am I. The coordination may not be there, but their heart is. Do your best is all I can ask,” Porter said. “They make it what it is really all about. They have improved leaps and bounds. It is amazing. I love to show them off.”

Mobius’ mission is to support valued roles in the community for people with intellectual and developmental disabilities by engaging, empowering, challenging, and helping people achieve their highest potential for independence and growth, according to the organization’s website.