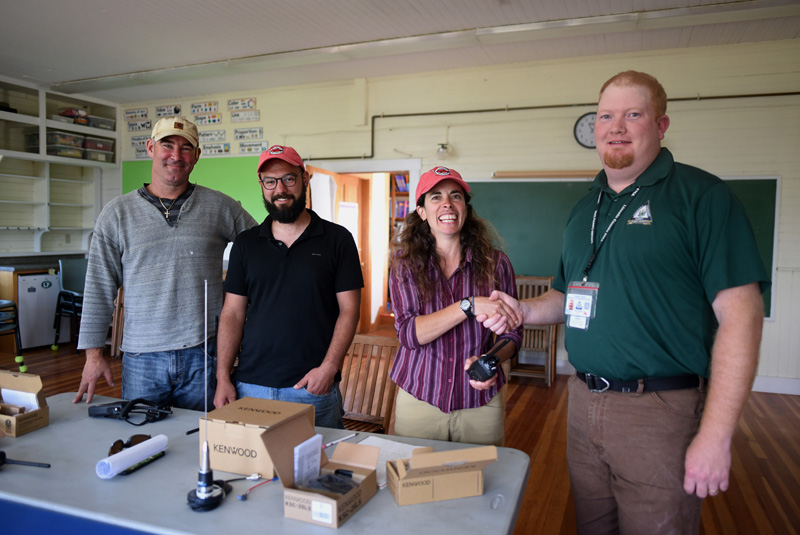 Monhegan’s fire chief and other emergency officials discussed the unique challenges the island faces as it plans for and responds to emergencies during a visit with county officials Monday, Aug. 20.

The county bought the radios, two handheld radios and a mobile radio for a vehicle, with a $2,093 grant from the U.S. Department of Homeland Security in 2016, according to Casey Stevens.

If the radios work well, the Monhegan Fire Department will eventually replace all its radios with the new ones, according to Jessica Stevens.

The radios allow members of the fire department to communicate with each other and with the Lincoln County Communications Center in Wiscasset.

During discussion between the county and island officials, Rollins said that in certain foggy conditions, the light on top of the island’s LifeFlight tower gives off an amber hue that gives the impression that there is a fire.

He said the department wants to change the color of the light or find another solution to avoid causing panic.

Rollins showed Casey Stevens and Temple copies of the island’s emergency instructions for various scenarios, such as fires and medical emergencies.

In the event of a fire in the village, the instructions direct everyone on the island to proceed to the church lawn, Fish Beach, or Swim Beach, or move upwind of the fire toward the shore.

In the event of a fire in a cottage or home, the instructions direct occupants to get out of the building and move upwind of the fire. If possible,  a fire extinguisher or garden hose should be used to put out the fire.

In the event of a forest fire, islanders should move upwind and toward the shore, such as the church lawn, Fish Beach, or Swim Beach, then, once in a safe place, await instructions from officials, which could include evacuation.

“If fire is small and containable, put it out using any possible means,” the emergency instructions state. It states that 911 should be called in all scenarios, including medical and police emergencies.

“(A forest fire) is one of our biggest fears out here,” Rollins said. Smoking and open flames are prohibited outside the village due to the high risk of a forest fire.

Due to the small size of the island and the limited resources of its fire department, the department  prioritizes getting everyone to a safe location, such as Fish Beach, over fighting a fire.

“I think that you’re on the right track of getting people into a safe spot as your top priority, and not fighting the fire,” Casey Stevens said. “With the resources you have to fight it, it’s probably going to be a losing battle.”

“Life first,” Rollins said. “The island is a mile and a half long, and if you think of how fast a forest fire can travel with the right wind, it’s scary.”

Casey Stevens recommended putting up signs telling people where to gather in the event of an emergency.

The fire department has a siren on top of its fire shed, which it would use  to warn people on the island of an emergency, according to Rollins. The department previously used the church bell, but it is no longer usable.

Casey Stevens recommended getting a speaker and recording situational messages to give instructions to the public.

Temple suggested that the department could test the system each month, so those on the island become used to it and know what to do in an emergency.

The group discussed training for the fire department and interior versus exterior firefighting.

According to Jessica Stevens, there are around 14 volunteers on the fire department in the summer.

The island’s distance from the mainland and other factors make it difficult for volunteers to complete training and for the department to acquire equipment necessary for interior firefighting.

Jessica Stevens said it’s easier to make training happen if the instructors can come to the island, because it’s difficult to send volunteers to the mainland.

“You can’t even walk into these buildings if they are on fire,” Eichner said. “They’re shells … you’re not even on concrete foundations.”

“I think there should always be somebody that can don a Scott (air) pack and go in and look for somebody, look for a child. I think that’s important, because it’s life first,” Rollins said. “But you don’t want to send somebody in alone, so that has to be two people.”

Jessica Stevens said the fire department is working on a map of the island and a 911 address and phone number list, in order to make it easier to find where an emergency is taking place.

Street names and house numbers are not all displayed on the island, so even for Rollins, who grew up on the island, finding the right street or house can be a challenge.