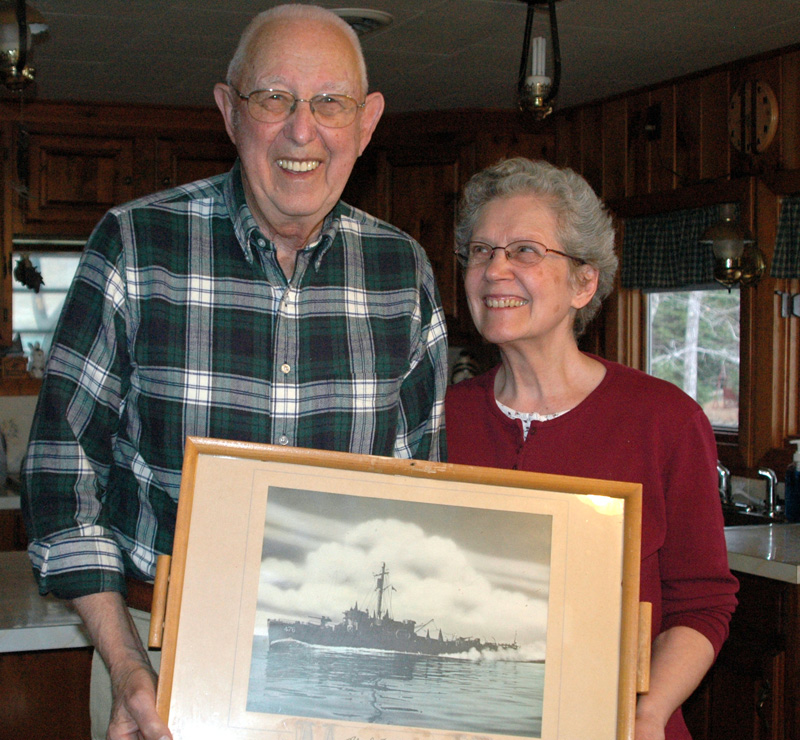 Alvah and Georgetta Moody, in 2013, hold a picture of a ship Alvah Moody served on during World War II. Moody, a co-owner of Moody’s Diner who spent virtually his entire career there, died Feb. 8. (LCN file photo)

A co-owner of Moody’s Diner who grew up with the business and spent virtually his entire working life there died Feb. 8 at his home on Damariscotta Lake in Nobleboro.

Alvah Moody, 92, was born the year his parents, Percy B. and Bertha Maloney Moody, established the diner. The third of nine children, he was the eldest living sibling at the time of his death.

Dan Beck, a nephew of Alvah Moody and the current general manager of Moody’s Diner, said Alvah Moody was one of four co-owners of the business, with Beck, Nancy Moody Genthner, and Steve Moody.

Alvah Moody semi-retired from the diner’s kitchen in January 1994 at the age of 66. He left an indelible mark on Waldoboro’s famous restaurant.

Beck described his uncle as a critical part of the kitchen who would help wherever he was needed.

“Until he retired, he did anything and everything here,” Beck said.

Alvah Moody started out as a dishwasher and worked his way up to kitchen manager. He cooked, ordered food, and supervised the kitchen staff.

When the diner’s kitchen was redone, Alvah Moody worked with one of his brothers-in-law, Bill Jones, husband of Nellie Moody Jones.

Alvah Moody and Jones “had 50-plus years of experience in the kitchen,” Beck said.

Alvah Moody also played an important role in the growth of the diner, both as a business and its physical expansion.

“This diner has had 22-23 additions since it opened and Alvah has been a part of all those in some degree, with the exception of the one we are doing right now,” said Beck, who co-owns the diner.

Alvah Moody and his brothers tried to use all they could at the diner, according to Beck, who explained how they turned an old plywood mural of the motel grounds into shelving when he had just started at the diner in 2002 or 2003.

“For the Moody boys, there was no such thing as waste,” Beck said.

Beck said the shelving was moved recently and he made a point to save it, as he hopes to put the mural back together at some point.

Don Mortensen worked for Moody’s Diner for about 40 years, side by side with Alvah Moody for most of them.

“Just working there made me feel like I was part of the family. They were very good to me,” Mortensen said.

Mortensen started at the diner with a cleaning job a couple nights a week, working alongside a brother of Alvah Moody’s, the late David Moody. Alvah Moody and Jones were the main cooks at the time.

Mortensen’s two days a week turned into three and eventually a full week, then a career.

When Jones retired, Mortensen was asked to help out in the kitchen, working nights and cleaning, when the diner was open 24 hours per day.

“I got to know Alvah pretty well. We worked together in the kitchen. We got along fine and he reminded me of my eldest brother,” Mortensen said.

“I can tell you the way he treated everybody, it was just like a family. He would do anything for you,” Mortensen said.

“He was a very caring person,” Mortensen said. “I can’t say anything bad about him.”

Mortensen said that even during Alvah Moody’s time away from the diner – a roughly three-year stint in the Navy during and after World War II – he found his way into the kitchen.

He enlisted at 16 and served as a deckhand on a submarine chaser in the South Pacific before becoming the vessel’s cook, using his experience in the diner and making special desserts for shipmates with recipes from his mother.

According to an April 2013 article in The Lincoln County News, the men on his boat had fresh, hot food every day, as well as made-from-scratch birthday cakes and daily treats of molasses, peanut butter, and sugar cookies.

After his time on the submarine chaser, he served the rest of the war on the fleet tugboat USS Yuma.

Moody offered his crewmates comfort that made difficult days a little easier. Not a man on board had a birthday forgotten, according to the April 2013 article.

Back in Lincoln County, Alvah Moody returned to Waldoboro High School, graduated at the age of 20, and spent the next 47 years in the family business.

According to the article, “Moody’s in the South Pacific” only lasted a few years, but Alvah Moody brought the same spirit back to the family diner, which continues to devote itself to fresh food, cooked to order.

Alvah Moody was on hand to celebrate the diner’s 90th anniversary in June 2017. He was one of the grand marshals of Waldoboro’s 2018 Memorial Day parade.

The diner closed for his funeral Sunday, Feb. 16.