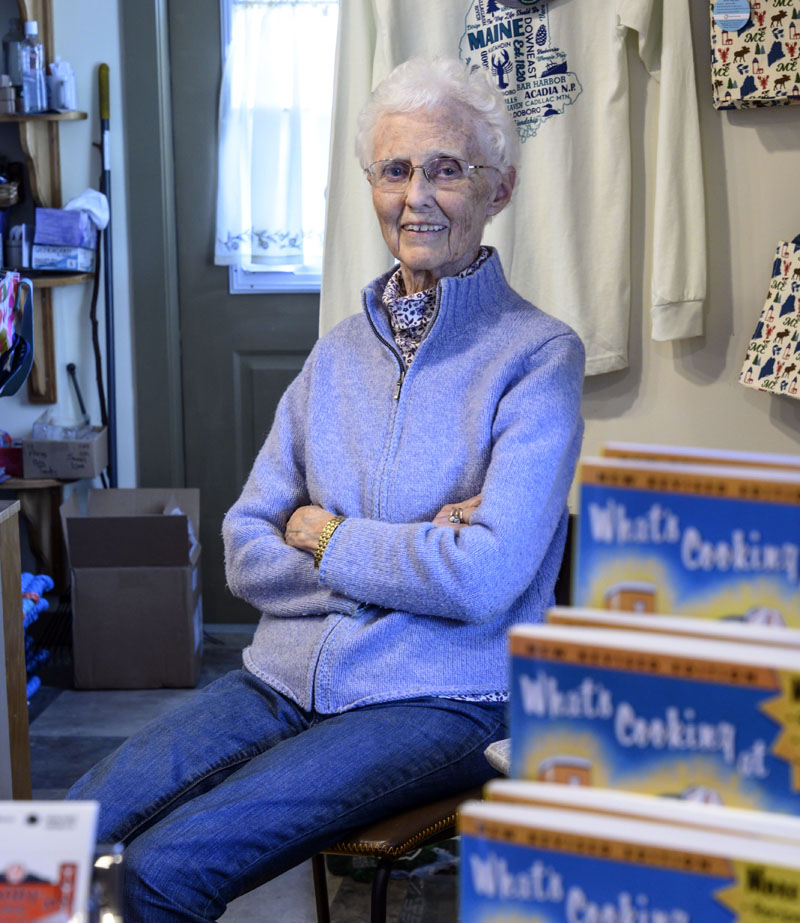 Nancy Genthner poses for a photo behind a display of her bestselling cookbook at Moody’s Gifts in Waldoboro in June 2021. Genthner was a co-owner and manager of Moody’s Diner before she started Moody’s Gifts in 1998. (Bisi Cameron Yee photo, LCN file)

Nancy Anne Moody Genthner, co-owner of Moody’s Diner and Moody’s Gifts in Waldoboro was what one community member called a guiding light. As a business owner, an author and an innovator, as a mentor and a mother, she led a life defined by a strong work ethic and the overarching importance of family.

Born in Waldoboro on Jan. 6, 1935, to Percy and Bertha Moody, founders of Moody’s Diner in Waldoboro, Genthner was the sixth of nine children. She worked at the diner starting in her early teens and eventually became an owner.

Genthner attended Waldoboro High School where she met her future husband, Wayne Genthner. The couple married in 1955 and had three daughters: Catherine Hopler, Anne Braley, who died in 2021, and Mary Olson.

“They made marriage look very easy,” Hopler said of her parents.

Olson said her mother would work at the diner while her father went fishing or hunting.

“I think they each kind of had their thing and then they would come together. They were both pretty independent,” she said. “A lot of people thought (my mother) shouldn’t be such a strong woman because Dad was pretty chill. But you know what? I think its fine to be a strong woman. There’s no shame in that.”

Nancy Genthner studied social work and secretarial science at Bryant College in Rhode Island and at the University of Maine. She left school when she married but the lessons she learned stuck with her.

“My mom had really good secretarial skills, really good organizational and business skills. I think it was just the way her brain worked,” Olson said.

Nancy Genthner’s daughters remember her being a rapid-fire typist. Hopler said her mother would call the diner every morning to get the specials of the day. She would then insert multiple sheets of paper into a manual typewriter with carbon paper between each one and type out copies of the day’s menu. 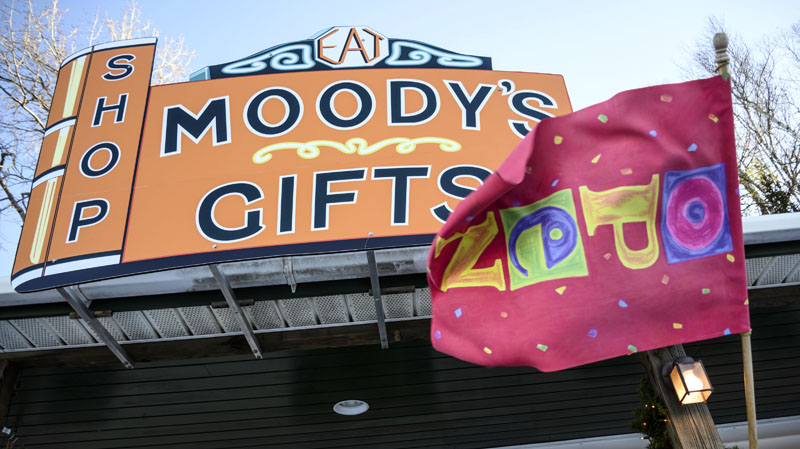 Moody’s Gifts is open for business in Waldoboro on Monday, Dec. 12. Seeing a need for a designated merchandise space, Nancy Genthner opened the successful shop with her daughter Mary Olson in 1998. (Bisi Cameron Yee photo)

“Her fingers were flying across those keys every morning,” she said.

Nancy Genthner was a co-owner of Moody’s Diner up until just before she died, first with her brother Alvah Moody and brother-in-law Bill Jones, then with two nephews, Stephen Moody and Dan Beck. Beck owns the diner today as well as the gift shop, which he purchased earlier this year.

“They all pretty much poured their life into the business,” Olson said. “And I really believe that’s why it was so successful.”

The business came first for everyone.

“On holidays we didn’t go have family picnics,” Olson said. “We worked when we were old enough. Memorial Day weekend, July Fourth. I remember waitressing many Christmas Eves.”

The diner represented the legacy of Percy and Bertha Moody, both so beloved by their children and grandchildren. 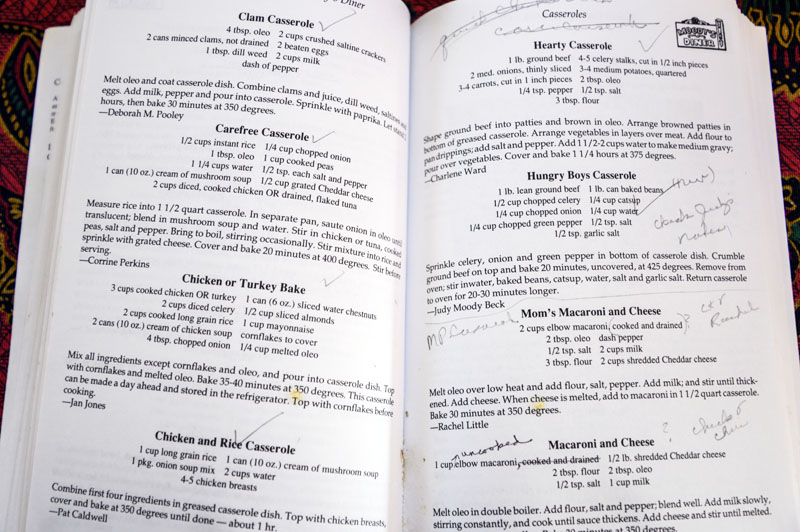 A copy of the original “What’s Cooking at Moody’s Diner” features Nancy Genthner’s handwritten notes in Waldoboro on Monday, Dec. 12. Genthner’s notes indicate her revisions for the second edition of the cookbook. (Bisi Cameron Yee photo)

Nancy Genthner was a hands-on owner, responsible for scheduling both the front of house and back of house, until her sister Judy eventually took over the wait staff when she moved back to Maine.

Hopler and Olson remember their mother sitting at a table with her hand-drawn scheduling grid. There would be a call-out.

“Guess I’m going up,” her daughters remember her saying. “Gotta go up.”

She never shirked the responsibilities of ownership.

As the hiring manager and trainer at Moody’s Diner, Nancy Genthner provided “such a good first job experience for people,” Olson said. 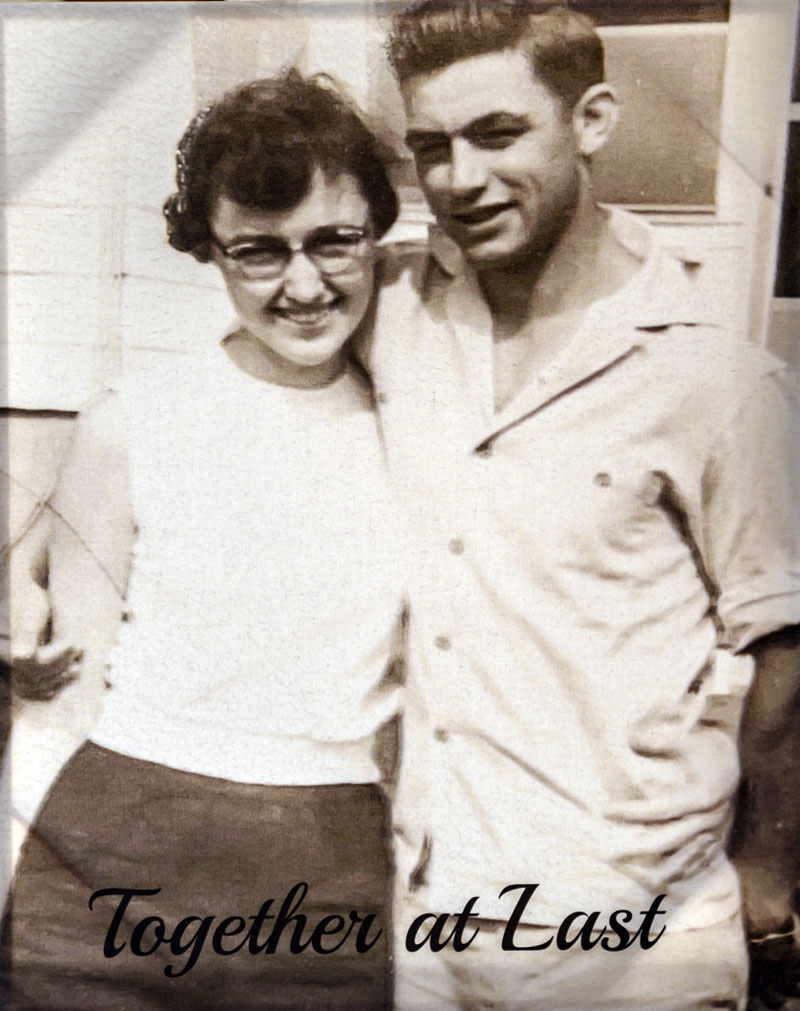 A photo of a young Nancy and Wayne Genthner was one of the images displayed at Nancy Genthner’s memorial on Saturday, Dec. 10. (Photo courtesy Mary Olson)

“She was in there working like they were,” Olson said. “She was hot and sweaty and drinking lemonade right next to them.”

Nancy Genthner was one of the driving forces in making Moody’s Diner one of Maine’s first smoke-free establishments in 1993. Prior to that “the smoke just hung because it was a low ceiling in there,” Olson said.

Nancy Genthner recognized the power of branding early on. According to Hopler and Olson, she was responsible for initiating the sales of Moody’s T-shirts and other merchandise. The T-shirts featuring the restaurant’s iconic slogans are bestsellers at the gift store and when customer Mark Brownstein sent a picture of himself in a Moody’s shirt in front of the Egyptian pyramids it started a trend. The walls around the diner’s front window are filled with photos of people around the world dressed in their Moody’s finest.

The merchandise at the front of the diner began to take off, causing a log jam at the entrance. Nancy Genthner wanted to set up a separate area for merchandise and suggested an addition but it didn’t happen. She didn’t give up on the idea though, and in 1998 she and Olson opened Moody’s Gifts in a separate building across the parking lot with Olson sourcing most of the product and Nancy Genthner managing the accounts and balancing the checkbook to the penny.

Growing up in the Moody family meant Nancy Genthner knew good food. She was a good cook too, according to her daughters. She was known for her biscuits, her chop suey, her mincemeat pie made with venison or moose meat brought home from her husband’s hunting trips. 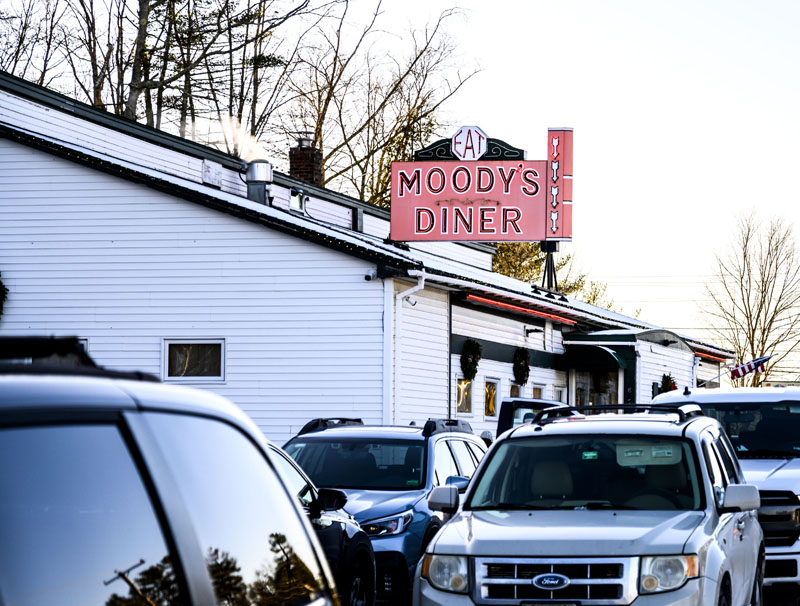 Cars fill the parking spaces outside Moody’s Diner in Waldoboro on Monday, Dec. 12. Nancy Genthner was a co-owner of the popular eatery founded by her parents until well into her 80s. (Bisi Cameron Yee photo)

Customers would ask Nancy Genthner advice about recipes so she decided to write a cookbook sharing some of the diner’s most requested dishes, like fish chowder, meatloaf, and pies. “What’s Cooking at Moody’s Diner” did better than she could have ever imagined, according to Hopler.

“The stories and the photos just really made it special,” Hopler said.

People were interested in the Moody family because the business had been around for so long. Customers would leave Maine and come back and Moody’s Diner would still be the same according to Olson.

The cookbook has sold in the neighborhood of 100,000 copies and Nancy Genthner continued to receive royalties every quarter.

“She always would get a little check and be like “you need to write a book, girls,’” Olson said. 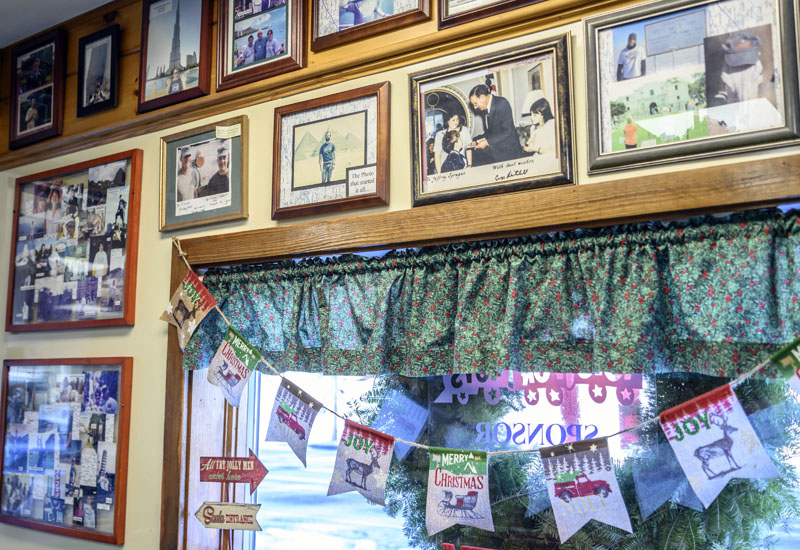 Photographs of people around the world sporting Moody’s T-shirts fill the front entrance of Moody’s Diner in Waldoboro on Monday, Dec. 12. A customer sent in a photo of himself wearing the shirt in front of the Egyptian pyramids prompting a deluge of similar photos by fans of the diner and its food. (Bisi Cameron Yee photo)

“It was the only cookbook that ever made me cry because there were so many memories,” Hopler said.

Those memories meant even more near the end of Nancy Genthner’s life when her family would read the stories aloud to her.

“It just brought her back,” Olson said.

Nancy Genthner was a member of the First Baptist Church. After she died on Dec. 5 the family received letters from former pastors about what a huge influence their parents had been in the church. 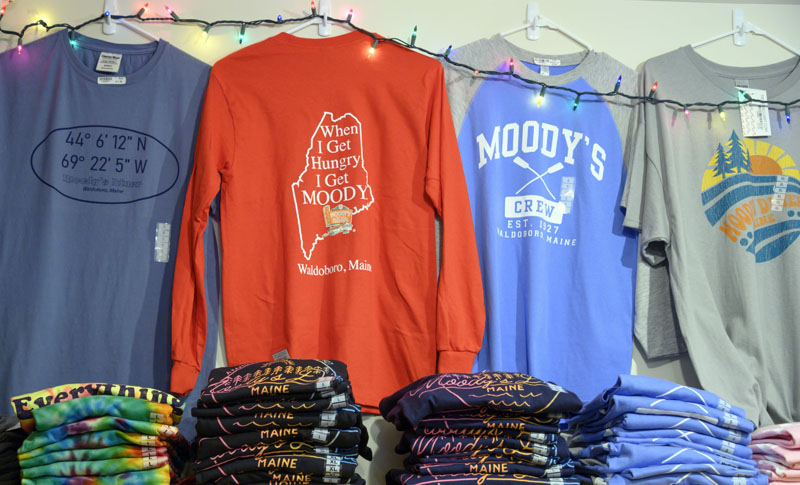 T-shirts fill a display at Moody’s Gifts in Waldoboro on Monday, Dec. 12. As a co-owner of the iconic Moody’s Diner, Nancy Genthner realized the power of the Moody brand and initiated a merchandise collection that started with T-shirts and grew to include a wide variety of items featuring the Moody name and its defining slogans. (Bisi Cameron Yee photo)

Hopler and Olson said they found notes and devotionals their mother had jotted down in drawers and cupboards throughout her house. She saved everything she had written, including who she was praying for, and her daughters found comfort and encouragement in these insights into their mother’s faith.

For Hopler and Olson their favorite memory isn’t specific to their mother; it’s about family.

After church on Sundays, Nancy and Wayne Genthner would gather their children and take them out on the water in an aluminum boat with an outboard motor. 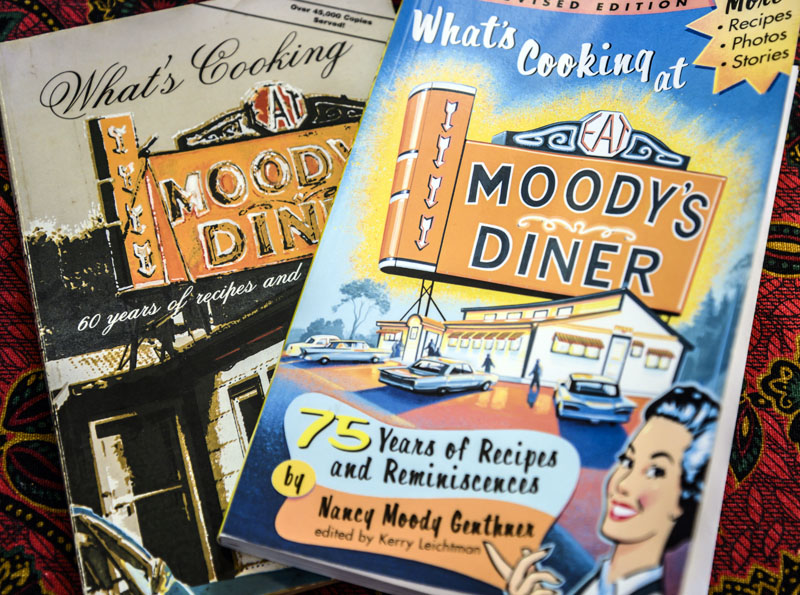 The first and second edition of Nancy Genthner’s cookbook share space on a table at her home in Waldoboro on Monday, Dec. 12. The first edition sold 45,000 copies and since the publication of the second edition, Genthner’s daughter Mary Olson estimates that total sales have likely topped 100,000. (Bisi Cameron Yee photo)

“My mom would pack a picnic lunch and we’d go out in the little boat, my sisters and I,” Olson said. “They’d be sitting up front. I’d be sitting in the middle with my mom’s arm around me … and my dad would be in the back of the boat with the motor and we’d go out to an island and have a picnic, go swimming.”

Hopler remembered how the waves would occasionally get rough but they were never scared.

“We were all together,” Olson said.