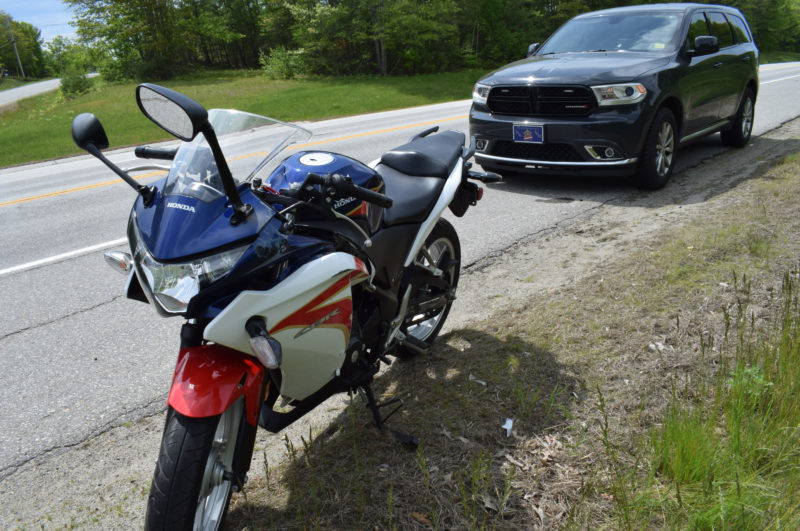 A Honda CBR motorcycle stands on the side of Route 1 in Nobleboro, with a Lincoln County Sheriff’s Office cruiser in the background, after a collision with a 2017 Toyota Highlander on the morning of Sunday, May 23. The driver of the bike, Ernest Allen Oliver Jr., 62, of Nobleboro, was transported to the hospital with “serious but not life-threatening” injuries, according to Lt. Michael Murphy, of the LCSO. (Evan Houk photo)

A motorcyclist was transported to the hospital after colliding with a car at the intersection of Route 1 and Back Meadow Road in Nobleboro the morning of Sunday, May 23.

Lt. Michael Murphy, of the Lincoln County Sheriff’s Office, said the motorcyclist’s injuries were serious, but not life-threatening.

Ernest Allen Oliver Jr., 62, of Nobleboro, was turning left onto Route 1 from Back Meadow Road to head south on his Honda CBR motorcycle. Oliver failed to yield to a 2017 Toyota Highlander traveling south that was driven by Caitlin E. Ernst, 28, of Nobleboro, Murphy said.

Ernst swerved to the left to avoid the motorcycle. The front passenger corner of the Highlander hit the motorcycle, ejecting Oliver from the bike, Murphy said. If Ernst hadn’t made an evasive maneuver, the crash could have been much worse, he added.

“She didn’t hit him directly, it was a glancing blow,” Murphy said. 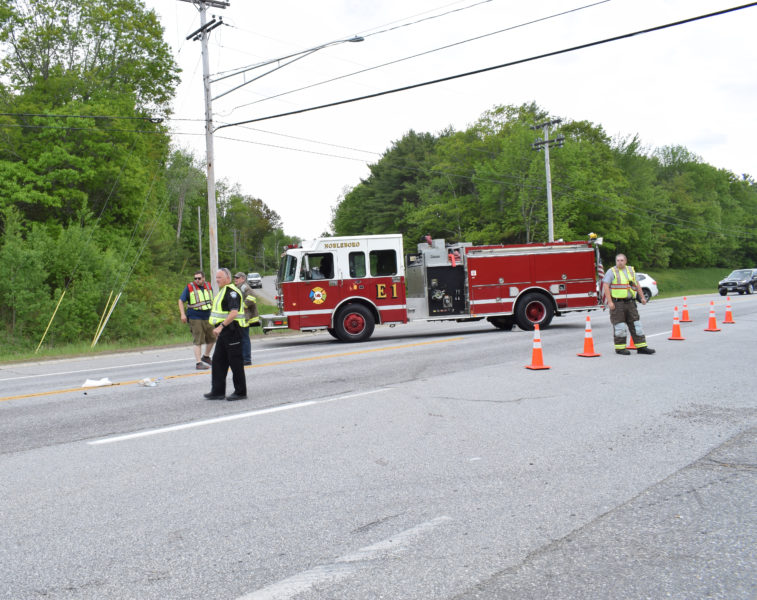 First responders direct traffic at the intersection of Route 1 and Back Meadow Road in Nobleboro after a Toyota Highlander collided with a Honda CBR motorcycle on the morning of Sunday, May 23. A crash reconstruction unit from the Sagadahoc County Sheriff’s Office also responded to the scene later on. (Evan Houk photo)

Oliver was discharged from the hospital on Tuesday, May 25 and is recovering at home, according to his son, J.W. Oliver.

Ernst and the infant passenger in her vehicle did not appear to have any injuries, Murphy said. Ernst’s vehicle sustained some damage to the front passenger side of the vehicle and to the windshield, Murphy said.

Murphy said he does not expect any charges to result from the collision.

Traffic was backed up on Route 1 before being diverted at the intersection of the highway and Midcoast Road for about 40 minutes to clean up the scene.

A crash reconstruction unit from the Sagadahoc County Sheriff’s Office arrived around noon and traffic was diverted for another 15 minutes while the unit investigated. The scene was completely clear by 12:15 p.m., Murphy said.

Allen Oliver is the manager of the Nobleboro-Jefferson Transfer Station and writes the “Waste Watch” column for The Lincoln County News.