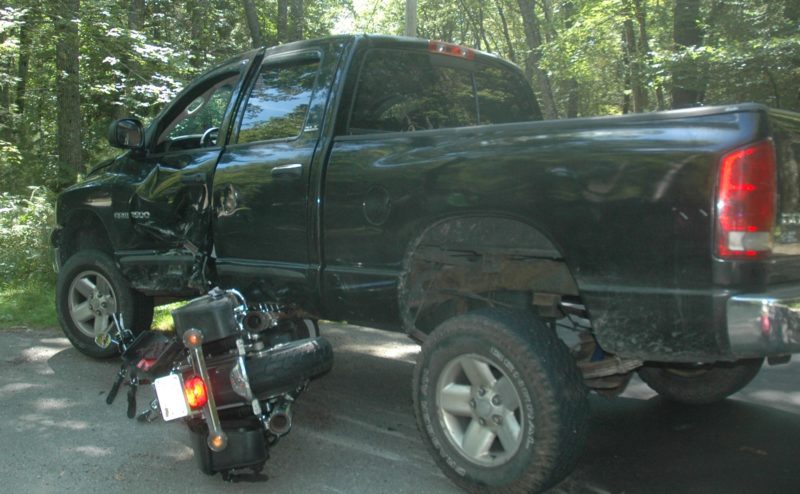 A motorcyclist was transported to LincolnHealth-Miles Campus following a collision with a pickup on Turner Road in Bremen shortly before noon on Friday, Sept. 9. (Alexander Violo photo)

A Rockport man sustained injuries to his head and legs when his motorcycle collided with a pickup truck on Turner Road in Bremen shortly before noon, Friday, Sept. 9.

Paul Barrows, 61, of Rockport, was driving a Harley-Davidson motorcycle southwest on Turner Road behind Branden Lucarelli, 38, of Waldoboro, who was driving a black Dodge pickup truck, according to Lincoln County Sheriff’s Deputy 1st Class Brian Collamore.

Lucarelli said he signaled to turn left into a driveway on Turner Road and the next thing he heard was the sound of the collision, according to Collamore. The motorcycle hit the driver’s side of the truck and came to rest under the truck.

The Central Lincoln County Ambulance Service transported Barrows to LincolnHealth’s Miles Campus in Damariscotta, according to Collamore. He was later transported to Maine Medical Center in Portland.

He was in satisfactory condition as of Monday, Sept. 12, according to a Maine Medical Center spokesperson.

Barrows was not wearing a helmet, Collamore said.

Lucarelli was not injured.

The cause of the accident has not yet been determined and the accident remains under investigation, Collamore said.

The motorcycle was towed from the scene. The pickup was able to leave under its own power, Collamore said.