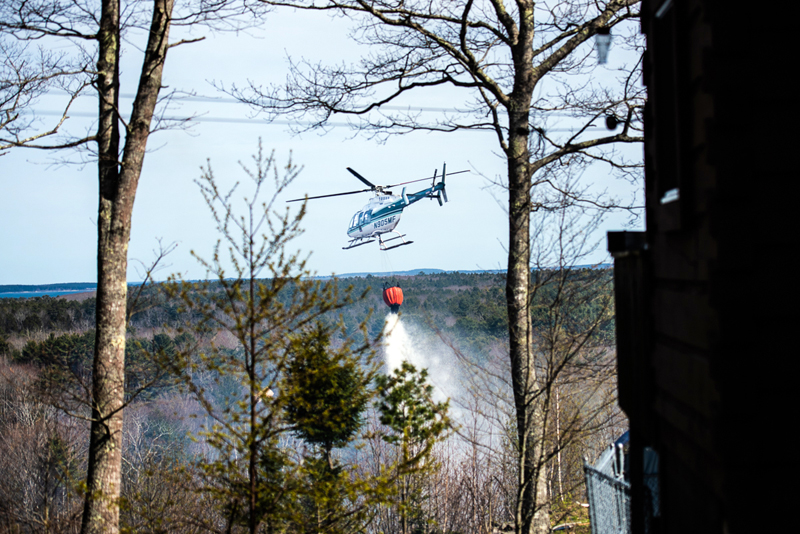 A helicopter releases water onto a brush fire in Bristol on Saturday, May 7. (Bisi Cameron Yee photo)

A brush fire threatened two homes and burned approximately four acres of woodland in Bristol on Saturday, May 7.

The fire started due to a non-permitted burn at 366 Rock School House Road, according to Bristol First Assistant Fire Chief Jared Pendleton.

The initial call came in at 2:03 p.m. A second fire response location was quickly identified at 217 Sodom Road, where smoke from the fire below was threatening farm animals. The Sodom Road property also provided a second avenue from which to attack the fire.

Initial reports indicated a very small fire, but Pendleton said with the speed at which it was traveling and growing, it was a much larger fire firefighters arrived. The fire was wind-driven toward Sodom Road, uphill from Rock School House Road. Wind-driven fires move even faster uphill. “It was a little scary for a few minutes until the helicopter came,” Pendleton said.

Having a bird’s-eye view of the fire allowed firefighters to better gauge its extent. “One person could never scout the area,” he said. “The fire was traveling so fast.

Pendleton said the steep terrain was challenging, referring to it as “billy goat territory.” Firefighters were often unable to see each other due to the topography of the land.

There was no road access to the area where the fire was spreading. All-terrain vehicles and utility-terrain vehicles brought to both staging locations helped firefighters get to the fire, which was a quarter- to a half-mile into the woods from Rock School House Road.

An ATV is a four-wheeler that can carry a couple of people and help lay hose. A UTV is larger and can carry a bigger payload, including portable pumps. UTVs also have treads that can make them more maneuverable in muddy locations.

The origin of the fire was near a pond, so firefighters had access to water at the scene. A Maine Forest Service helicopter performed seven water drops bucketed from that pond.

High wind, terrain, low humidity, and accessibility were all factors that added to the logistical and tactical challenge of the fire, Pendleton said. In addition, the growing fire required more physical exertion on the part of the firefighters.

Central Lincoln County Ambulance Service and Bristol first responders were on hand to provide water and rehab to firefighters. The Lincoln County Sheriff’s Office was also on scene.

The Edgecomb and Wiscasset Fire departments sent teams to the Damariscotta station to cover Bristol, Bremen, Damariscotta, and Newcastle. Jefferson Fire and Rescue was on standby to Waldoboro and Nobleboro.

Pendleton gave “huge kudos” to the Lincoln County Communication Center, which fielded numerous pages during the course of the fire. “They were bombarded with requests and they shined,” he said. “It’s a team effort. It takes everyone. They held up their end nicely.”

“Mutual aid is so effective; we’ve become so good at working together,” Pendleton said. He cited the strength of the Lincoln County Fire Chiefs’ Association in promoting interaction and training between departments.

The fire was in the “mopping up” stages by 5 p.m. Saturday evening, according to Pendleton, and firefighters returned to the station around 8 p.m.

Bristol Fire and Rescue revisited the scene the following morning to check for hot spots, but found none.

“If there’s a question whether or not to burn, don’t,” Pendleton said. He called the fire season in Maine “short but aggressive.”

“Fires like this put all our firefighters at risk,” he said.

The Maine Forest Service issued a citation to the homeowner who will also be responsible for the suppression costs incurred and for reimbursing the towns that responded.

Pendleton said lack of knowledge in the process on the part of the homeowner was at fault. “It’s a very expensive lesson,” he said.

Pendleton said the homeowner was grateful for the job all the firefighters did to limit the fire to the wooded areas and to protect the properties at risk.

Burn permits are free and can be requested online or via local fire departments. However, Pendleton said, due to staffing issues it can sometimes be difficult to make direct contact with a local department. He said the online service helps fill that void.

Pendleton said a permit would have been denied on May 7 due to the high fire danger.

The availability of burn permits depends on the daily fire danger rating, which can be found at mainefireweather.org.

Permits are limited to 24 hours and become invalid if the fire danger rating becomes high, very high, or extreme, according to the Maine Department of Agriculture, Conservation and Forestry.

According to the department’s website, escaped debris burns are the state’s top cause of wildfires, with more than 90% of all wildfires in Maine occurring between 9 a.m. and 5 p.m. when conditions are driest and the wind is more of a factor.

It is unlawful to burn brush piles during those hours unless there is steady rain or the ground is completely covered by snow, according to the website.

For more information, go to apps1.web.maine.gov/burnpermit/public/index.html.