A woods fire that started on Sunday, June 13 burned more than six acres in the area of 1151 Wagner Bridge Road in Waldoboro. (Submitted photo)

A Waldoboro woods fire that started on Sunday burned over six acres and was declared “out” by Waldoboro Fire Chief Paul Smeltzer at 5:37 p.m. on Tuesday, June 15. 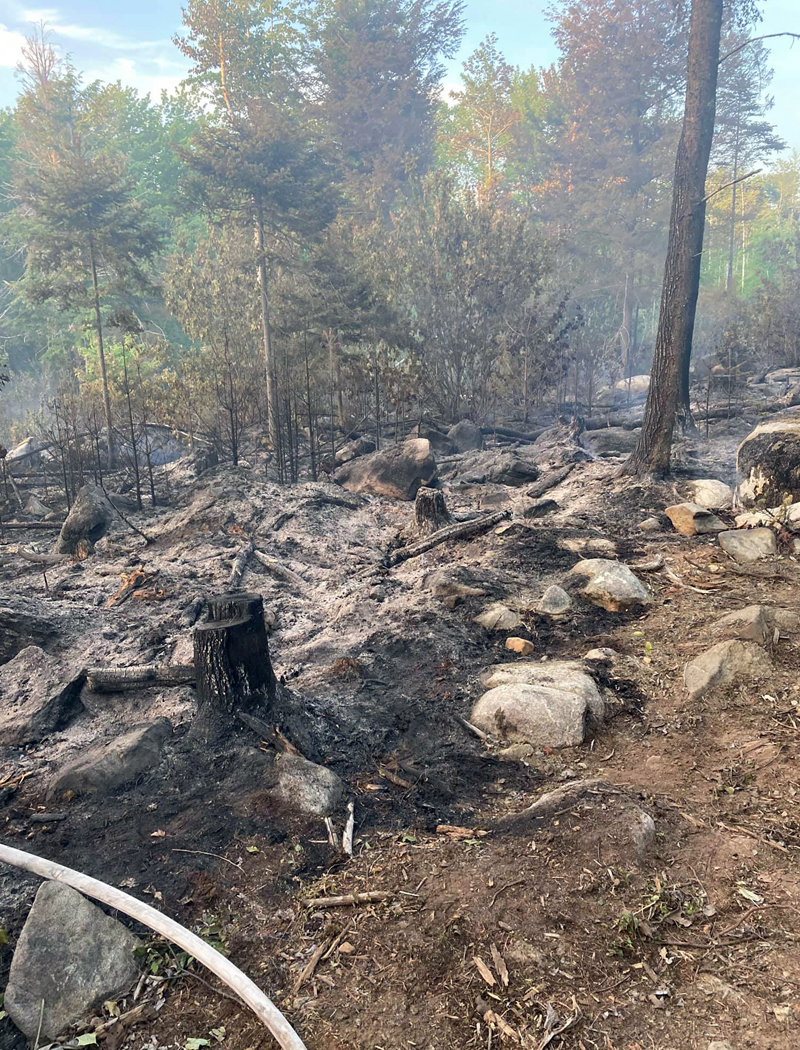 A multi-day woods fire in Waldoboro that started on Sunday, June 13 burned over six acres before being declared “out” Tuesday evening by Waldoboro Fire Chief Paul Smeltzer. The Maine Forest Service is investigating but has not yet determined a cause for the blaze. (Photo courtesy Waldoboro Fire Department)

In a phone interview Wednesday, June 16, Smeltzer said crews had started to move and pack up equipment and will be able to clear the scene as long as the fire remains dormant.

“All of the mutual aid fire departments in Lincoln County were just phenomenal,” Smeltzer said. “We’re very fortunate in this area to have a quality fire service. The fire would still be going if it wasn’t for mutual aid.”

Smoke was first reported in the area of 1151 Wagner Bridge Road by a resident on Hoak Road at 2:06 p.m. on Sunday, June 13. Smeltzer said a fire could not be located at first, so the Maine Forest Service was called and a helicopter was dispatched to locate the fire.

The fire was burning approximately one mile into a heavily wooded area. Smeltzer said the forest service helped in the suppression efforts by doing water drops from the helicopter.

The area where the fire is located is very steep with a lot of hills and has made suppression efforts challenging, Smeltzer said.

According to a post on the Waldoboro Fire Department Facebook page, 55 firefighters from departments from Lincoln, Knox, and Lincoln counties responded to the fire at some point during the multi-day effort. Departments that responded include Bristol, Jefferson, Washington, Friendship, Nobleboro, Damariscotta, Rockport, Thomaston, Bremen, Chelsea, Randolph, Somerville, Boothbay, Southport, Union, and Whitefield, and members of the Lincoln County Strike Team.

Smeltzer said Wednesday morning that no buildings were ever in danger and there were no reported injuries.

Smeltzer said no cause has yet been determined for the fire as all the focus had been on suppression efforts. The Maine Forest Service was on scene Wednesday investigating the cause.

The blaze was “one of the largest brush fires in recent memory,” according to the department’s Facebook post. Smeltzer said a fire with a perimeter of about six-and-a-half acres is unusually large for Waldoboro. He added that it is unusual to have a fire at this time of year that burned so deep into the ground and that dry conditions contributed to the size of the blaze.