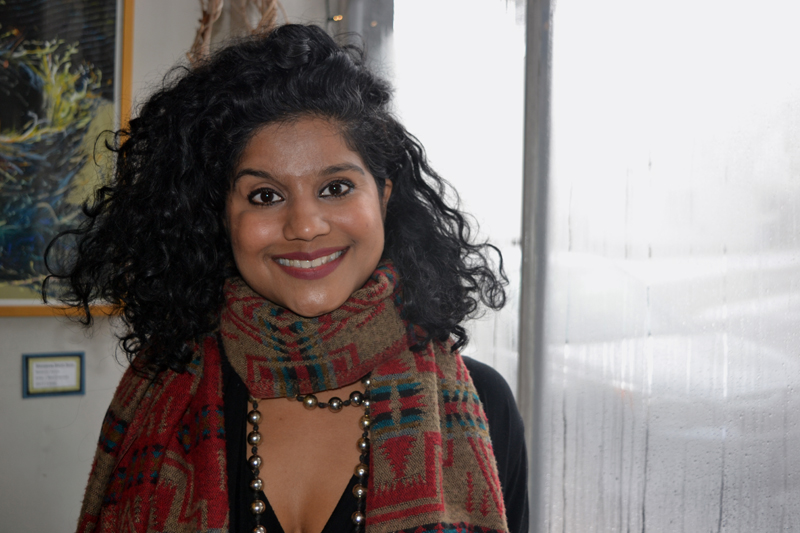 “When I left Mumbai 23 years ago, I never imagined in my wildest dreams that Boothbay, Maine would one day be my home, my happy place, my creative muse,” writes Cherie Scott in her blog “Mumbai to Maine.”

Scott’s big red wooden house in Boothbay has indeed become her beloved home, one she shares with her husband, Guy Scott, and their two young children, Sophia and Justus. She, Guy, and Sophia moved from New Jersey to Boothbay in 2007. Before that, Cherie Scott lived in Vancouver, Canada, where she moved from India with her parents when she was 16.

Boothbay is the place where Scott has generated and continues to generate an avalanche of ideas, including the ones fueling the touching and visually beautiful pilot episode of her six-part food-focused series-in-the-making, also titled “Mumbai to Maine.”

“We found this perfect house for our family and yet we were sitting there thinking, ‘Can we actually do this? Rural Maine – it can be hard to adjust,’” Scott says early in the pilot episode, reflecting on the family’s move to Boothbay from much busier (and warmer) New Jersey.

“I’m from away and I’ll never be from Maine, but I feel like I’ve been here, like, 10 lifetimes already,” Scott adds warmly. “It’s just how the people here make you feel about yourself.” She goes on to praise the importance of “the community, the small, tight-knit community” where she lives.

“We’re here for each other. People just have each other’s backs,” she says.

In the pilot, Scott – who is director of sales for Midcoast Hospitality Group and the former member services and events manager at the Boothbay Harbor Chamber of Commerce – spends time with her friend Kim Martin, co-owner of Eventide Specialties, a culinary specialty shop in Boothbay Harbor. 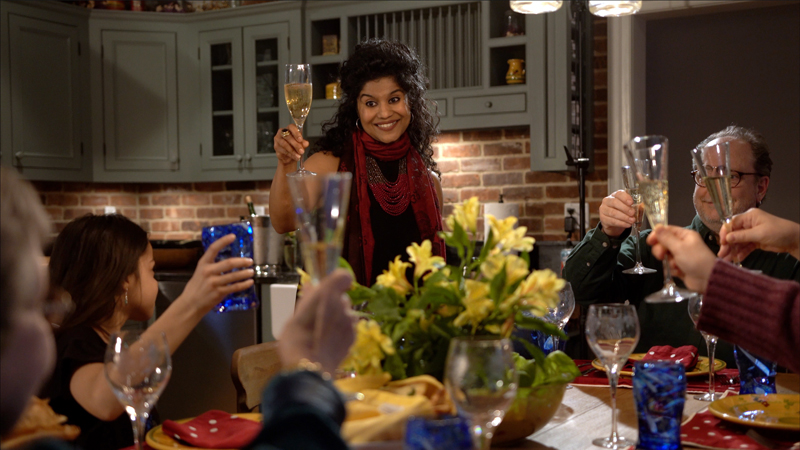 Cherie Scott in a still from the pilot episode of “Mumbai to Maine,” her six-installment series in development. (Image courtesy Cherie Scott)

The two foodies discuss the finer points of chai, olive oil, balsamic vinegar, spices, and bread-making. Martin, whose mother is Lebanese, and Scott make ethnic flatbreads together. Thanks to the deft skills of cinematographer Cody Mitchell, of Boothbay Harbor, and award-winning director Ryan Leighton, of Newcastle, seeing the freshly made bread still glistening in olive oil after the frying process has the effect of making the viewer’s mouth water.

There is a particularly touching moment captured 18 minutes and 40 seconds into the 24-minute pilot when Scott, upon smelling the spices she is putting into the traditional butter chicken dish she is preparing, says, “Mmm – that’s my mom right there, that cardamom. That’s Mom.”

Scott’s pilot episode of “Mumbai to Maine” made its debut at a screening on Dec. 11 to a full house at Harbor Theater in Boothbay Harbor.

“I saw people sitting in that theater, completely mesmerized,” Scott said during a recent interview in downtown Wiscasset.

Among the audience members, much to Scott’s amazement and delight, was Melissa Kelly, the executive chef and owner of Primo in Rockland. Kelly is the first two-time winner of the James Beard Foundation’s American Express Best Chef: Northeast Award, having won it in 1999 and 2013.

“Melissa Kelly, when she comes into the room, it’s like Steven Spielberg walked in the door,” Scott said, smiling broadly.

For her part, Kelly was similarly enamored. “I went to Cherie’s screening not knowing anything about her but excited to learn about culinary happenings here in Maine,” said Kelly by email. “I loved her film, meeting her, and seeing the wonderful turnout that snowy night. I have been cooking in Maine now for 20 years and am always happy to hear of new and exciting additions to this amazing state.”

Scott “got strong, conducive feedback” after the screening, she said. “They all ached to know more about Mumbai. My social feed was off the charts.” 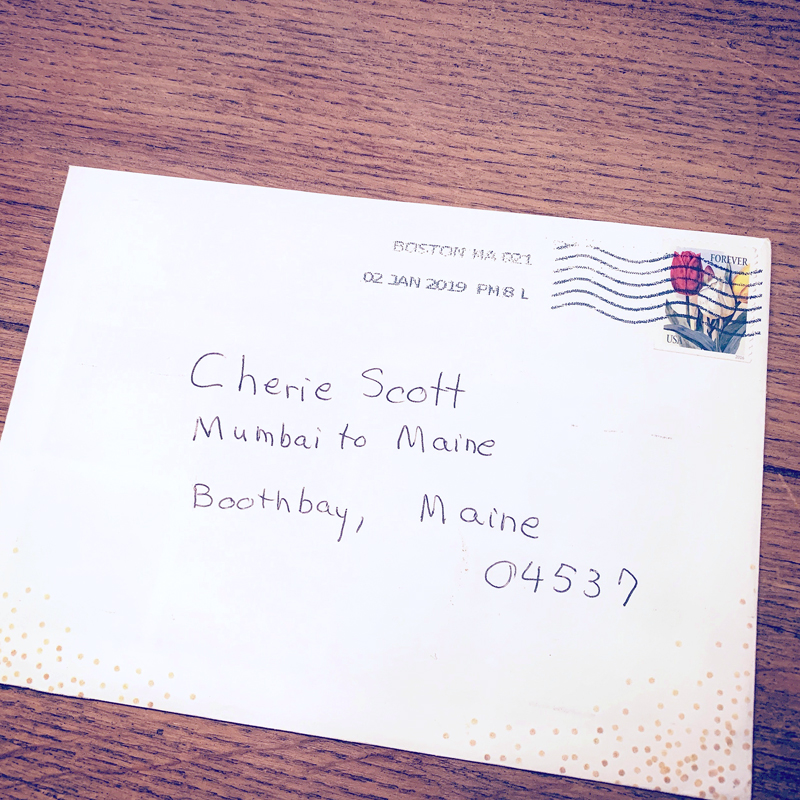 The popularity of Cherie Scott’s pilot episode of “Mumbai to Maine” is evidenced by this letter to Scott, which recently arrived at her home in Boothbay from a fan in Boston without a street address, only the name of her series. (Photo courtesy Cherie Scott)

“Our goal is to get all five shot this year,” Scott said of the remaining episodes in the series. “They always have a central culinary theme, but it’s truly about sharing my story and finding the commonalities with the subject – the commonality and the contrasts.”

The second episode will feature “two strong local female farmers,” Scott said, careful not to give too much away. She marveled over their “’field smarts,’ the entrepreneurial savvy that can outweigh the business savvy of an executive of a Fortune 500 company.”

Scott said her series aims to show “what it’s like to walk in the shoes of another Mainer.”

Scott’s popularity is growing. A recent letter from a fan in Boston arrived at her house addressed simply to “Cherie Scott, Mumbai to Maine, Boothbay, Maine 04537.”

“I know I am doing something right,” said Scott, reflecting on the favorable response to her work so far. “I’m hoping that when the six episodes are done, we can package it and sell it, maybe to Discovery Channel or PBS.”

Watch the pilot episode of “Mumbai to Maine” at tinyurl.com/y94pd9t8. Learn more at Scott’s blog, mumbaitomaine.com.