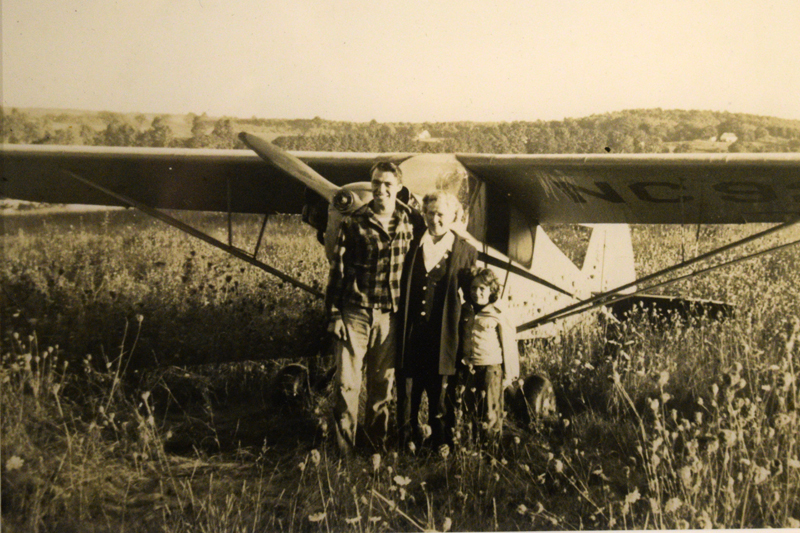 Billy Post, the pilot; Verlie Greenleaf; and Verlie Greenleaf’s granddaughter, Asenath “Senie” Greenleaf, pose for a photo after the first plane landing on Westport Island in 1948.

There was no ferry; there were no cars. When Verlie Greenleaf was born, the Westport Island of today was a world away.

The late Verlie Greenleaf lived through more than a century of change on Westport Island. An exhibit about her life and the change she witnessed is on display at the Maine Historical Society Museum in Portland under the name “My Island Home.”

According to Gaye Wagner, secretary of the Westport Island History Committee, in 1987, Verlie Greenleaf sat down with John and Louise Swanton for an interview. The town did not have a history committee at the time; instead, they interviewed her as members of the Westport Community Association.

“It just so happened with Verlie’s interview, not only did we have the interview, but we had a huge collection of photographs and diaries that were kept by her and given to the history committee a few years ago,” Wagner said.

Photos of Verlie Greenleaf and life on Westport Island came from her granddaughter, Asenath “Senie” Greenleaf.

The town is a contributing partner with Maine Historical Society and has worked with the society before.

The museum decided to pilot a program to draw attention to local contributing partners through an exhibit of information on the Maine Memory Network, the digital library of the museum. The history committee decided what would go in the exhibit.

Wagner described the exhibit as an opportunity to tell the story of Verlie Greenleaf’s life in her own words. The committee pitched the idea to the museum, which embraced it.

Throughout the exhibit, Verlie Greenleaf’s thoughts and stories appear on placards adjacent to photos of her life.

Verlie Greenleaf lived from 1891 to 1992. Born Verlie Colby, she was the third of six children, two girls and four boys.

Just after her birth, ice destroyed a wooden bridge between Westport Island and Wiscasset, according to the exhibit. Since there was no bridge or ferry, private boats carried people to the mainland.

Verlie Greenleaf witnessed great technological change on the island, such as the arrival of electricity in the 1940s. For a large portion of her life, she did not use many of the luxuries islanders take for granted today.

In 1948, Verlie Greenleaf took a picture with the pilot who made the first plane landing on Westport Island.

“(We) didn’t have any ferry. When I was first growing up, they had rowboats at the shores. Everybody had rowboats,” Verlie Greenleaf said in one document included in the exhibit.

“Years ago, when there was nothing but oxen and there were two horses, the south end was just as far away as Boston would be for us … there was the north end and the south end. Everybody walked,” Verlie Greenleaf said.

“We had our first ferry when I was 8 years old,” she said. “It was a flat-bottomed scow which took two cars and was pulled across the river by a wire cable.”

Verlie married Fred Greenleaf and they raised three children. The couple had a farm and would go door to door to sell their produce and take orders for their next visit.

For more than 45 years, she served as the town’s tax collector and treasurer. She did all the work at home, as there was no town office until the late 1990s. She began serving in town government in 1931, as a school committee member.

“She was Grammy,” said her grandson, Eben Greenleaf.

“She was so friendly to everybody,” he added.

To Dedee Greenleaf-Hodgdon, Verlie Greenleaf was not only her great-grandmother, but her mentor and friend. She called her Nana and remembers her as independent.

As a child, Greenleaf-Hodgdon would help send out the tax bills. Her great-grandmother also taught her to cook.

“She used to let us kids come over and take all of her linens out of the closet, all of her towels … and we used to make forts and tunnels in her living room,” Greenleaf-Hodgdon said. “As long as we folded them back up and put them back where we got them from, she was fine with that.”

Verlie Greenleaf would also let them take her quilts and make tepees in a field.

“Between her and her daughter-in-law … that’s probably where I learned to cook the most,” she said.

According to Greenleaf-Hodgdon, she had grandparents living in houses on both sides of her own. The other grandkids would fight over staying at Verlie Greenleaf’s house.

The town gave Verlie Greenleaf a retirement plaque after her nearly half-century as tax collector and treasurer. The plaque hung in her house.

Greenleaf-Hodgdon now lives in Verlie Greenleaf’s house with her husband.

Like her great-grandmother, Greenleaf-Hodgdon took the job of tax collector and treasurer for Westport Island. Only one other person had the position before it went back to a Greenleaf.

Verlie Greenleaf was a gardener and a well-known local pianist.

Every Saturday night, she played piano while her husband played fiddle and her brother-in-law, Jim Greenleaf, played drums. Others filled in as time went on, but the three-piece band would always play popular music of the time.

She provided musical accompaniment for the first time when she was 15 years old at Camp Molly Hall, and then later at the town hall.

Camp Molly Hall was a dance hall on the north end of the island, which was easily accessible for Edgecomb and Wiscasset residents. It operated from the 1890s to 1912.

Verlie Greenleaf’s history lives on through many members of her family who still live in the area.

“They did a heck of a good job. They covered just about everything during her life,” Eben Greenleaf said.

Although life on Westport Island has continued to change since Verlie Greenleaf’s death, her family doesn’t think any of those changes would surprise her.

“There is nothing that would shock her because she saw so many changes,” Eben Greenleaf said with a laugh.

The museum is closed until April 30, however, due to the coronavirus. Since some Westport Islanders will not be able to see the exhibit before it closes, Wagner asked the museum to digitize it earlier than planned.